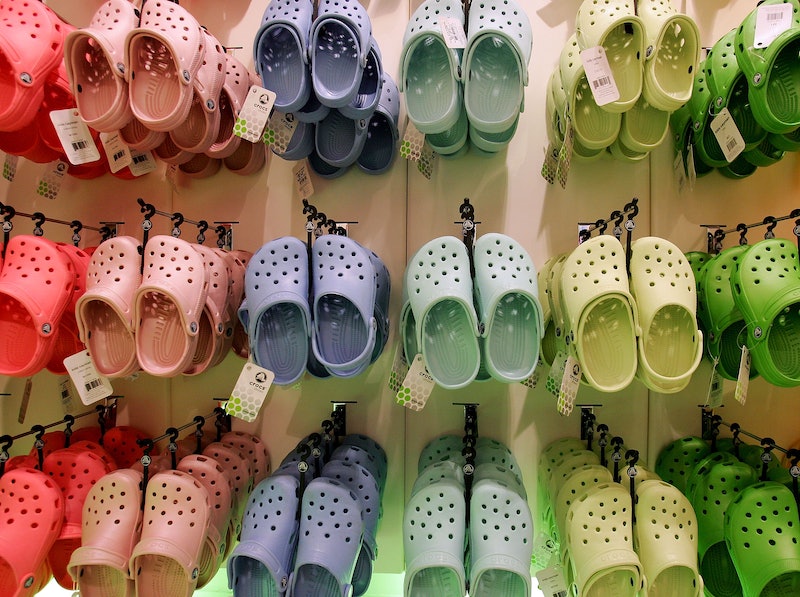 Whether you loved them (it's OK, your secret's safe with me) or loved to hate them, the end of Crocs — those colorful, holey plastic clogs that ran rampant in the early 2000s — might be near. According to The Wall Street Journal, the iconic shoe company plans to undergo a major restructuring plan, closing 75 to 100 stores and laying off 180 of its 5,000 employees. In addition, they also plan to shut down their headquarters in Niwot, Colorado, trim down the amount of styles they sell by 30% to 40% and end production of their "upscale" line. Yeah, they had one of those (and they looked like this).

While this all may sound a bit depressing, Crocs is actually just trying to be business savvy. By making the above cuts and store closures, the iconic footwear brand will save $4 million this year and $10 million in 2015. Still, they have fallen far from greatness: in 2006, they went public at $21 a share, which skyrocketed to $74.75 by October 2007. Just this past Monday, the shares closed at $14.84.

This comes as a bit of surprising news since we reported back in January that the 12-year-old company had received $200 million in funding. It appears as though it wasn't enough, although 2014 has been a remarkable year for the "ugly shoe." But, let's face it, Crocs are not on the same level as Birkenstocks and shower sandals. I know I might read that sentence in a couple of years and cringe, but right now, I totally mean it. No matter how hard you try to work them into a stylish ensemble, Crocs were just not meant to be stylish. They're comfortable and that's pretty much it. I'm sure that many doctors, chefs and gardeners will continue to tout them as their footwear of choice, but as far as fashion goes, it's just not in the cards for Crocs.

But while they may be experiencing some tough times at the moment, they should find comfort knowing that parents LOVE crocs for their kids. A "shoe" doesn't get much easier than children's Crocs. Perhaps in this restructuring, they should focus solely on revamping their kids' line.

More like this
An Ode To The Balm That Keeps My Hayfever At Bay
By Jessica Morgan
Mrs. Wheeler Wore A Vagina Necklace In 'Stranger Things' Season 4
By Allie Fasanella
12 Clear Resin Rings That Are So Y2K-Chic
By Vanessa Powell
You Can Buy Margot Robbie's 'Barbie' Roller Skates Now
By El Hunt
Get Even More From Bustle — Sign Up For The Newsletter