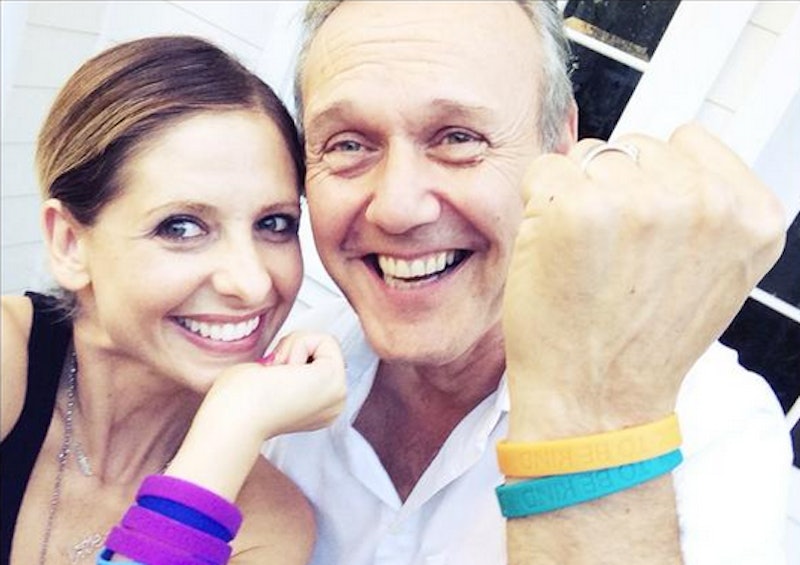 Have you given your thanks to the gods of social media today? Here's to hoping you did, because they have provided us with a Buffy the Vampire Slayer mini-reunion. It was full of magic, nostalgia, charity bracelets, etc. You know the drill by now.

This particular reunion took place between one former Buffy Summers, Sarah Michelle Gellar, and one former Rupert Giles, Anthony Stewart Head. According to Gellar, the watcher-slayer reunion was a surprise, and facilitated at least in part by Head's animal welfare organization Cool to Be Kind. I'll hold out hope that they also fit in a few hours of reminiscing and maybe a "Once More, With Feeling" or "Band Candy" rewatch.

I would like to encourage this cast to stage more reunions. Firefly held a big reunion for their tenth anniversary a couple years back — won't someone please just put the Buffy cast in a room together and film them talking for a few hours? Or at least, like, get Gellar to reenact that mini Buffy "resurrection" Joss Whedon drew a few weeks back?

More like this
Fans Think Beyoncé’s “Break My Soul” Is Calling For A New Great Resignation
By Sam Ramsden
S Club 7’s Jon Lee Continues To Reach For The Stars
By Rachel Mantock
The 'Hocus Pocus' Sequel Finally Has A Release Date & It Makes Total Sense
By Shannon Barbour and Radhika Menon
“The Door Is Always Open” For Another 'Breaking Bad' Spin-Off, Says AMC Boss
By El Hunt
Get Even More From Bustle — Sign Up For The Newsletter