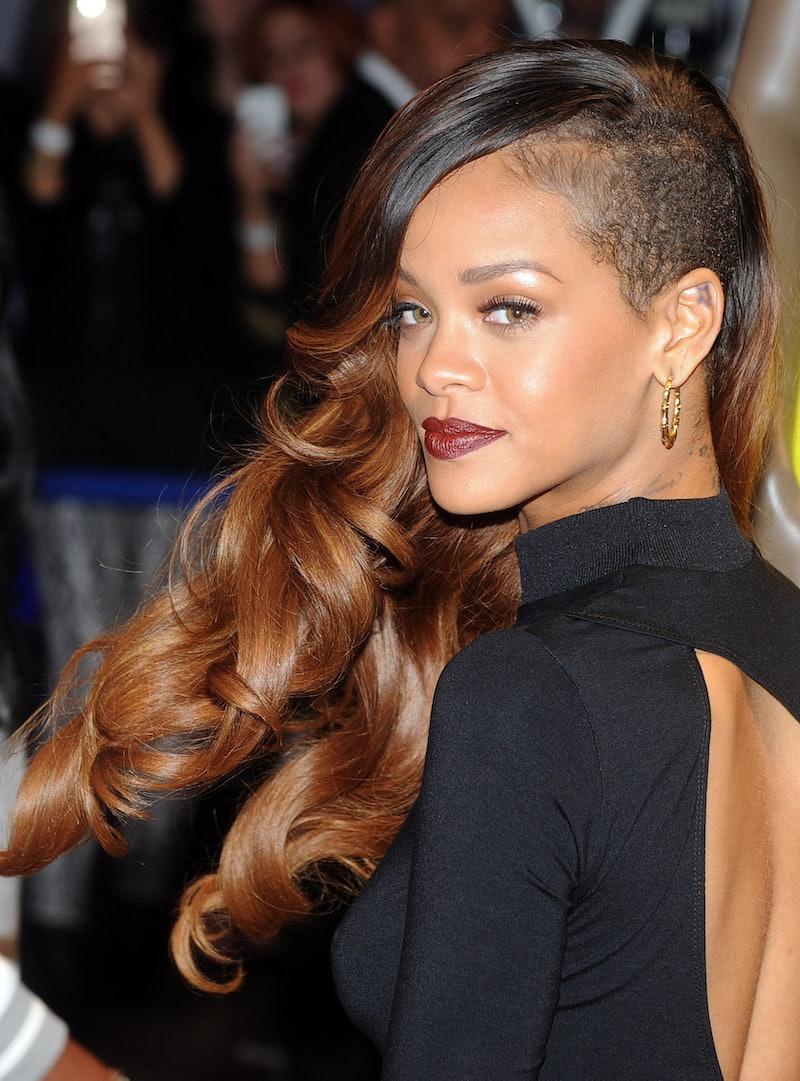 "Rihanna" and "controversy" are basically synonymous as of late. From the naked dress, to her largely public relationship with Chris Brown, Rihanna has grabbed our attention from the beginning and we haven't let go since. With a wild attitude and a lust for all things dark and dangerous, Rihanna has brought to light a series of different personas while successfully moving forward in her career. When she first came on the scene she met all the criteria for the next successful R&B pop star, but it wasn't until 2007 that RiRi really began to shine.

A master at reinventing her style and image, the world began to take note of Rihanna's impeccable taste in fashion and beauty around the time her third album, Girl Gone Bad, was released. It seemed that over night the singer lost her long brown beach waves for a much more sophisticated black bob, and that was just the beginning of her mission to try every single hair style and color available. From that point on we would slowly begin to see the many sides of Rihanna and a lot of that had to do with her massive alterations in hair styling. If ever there was an award for the most hair changes over the course of a year, Rihanna would undoubtedly take the cake. Taking risks and experimenting are an intricate part of her DNA, and has become one of her most notable traits.

While it would be almost an impossible task to recount all of her styles, below is an extensive master list of all her best 'dos, broken down by color. Please don't stop the dye jobs, Ri.

HER HUMBLE START AS A BRUNETTE

Our introduction to a young Rihanna had her looking sweet and innocent with perfectly blown out brunette tresses.

If it wasn't straight, it looked like this and was just as gorg.

After seeing the music video for "Umbrella", she made us all want to run out and get this perfect asymmetrical cut, stat!

4. TESTING OUT THE BOB

It was short lived, but we saw her in a bob and bangs during her dark haired days.

The perfect pairing of mini buns and dark green lipstick, an ode to the '90s.

There were many versions of this cut. This one happens to be the bad ass punk edition.

A poised and polished cut suited her just as well as the crazy ones.

When she got bored with her look, she added some gel and gems.

We also saw RiRi grow out her dark hair and embrace her natural volume with the perfect amount of bounce.

She has stated that black is her favorite of all the hair colors she's had, and it is not hard to see why.

Would it be crazy to think she just wakes up with these perfect waves?

There was that time she added some grey to her black locks--and even that looked incredible.

HER RADIANT DAYS AS A BLONDE

Looking sophisticated, but still sassy as a short haired blonde.

It went through a few different lengths in this shade and all of them were worthy.

When she become bored with it down, she brought it back up.

Whether curly or straight, this was another brilliant version of the RiRi mohawk.

17. BACK TO THE CLASSICS

For every hair color she had she took this style for a spin.

This wouldn't be the first time she worked a two-toned hair colour.

Rihanna may be wearing a wig in her music video for "Pour it Up", but I wouldn't put it past her to rock this in real life too!

She danced her way through a blonde bob.

No one does dark roots better than Rihanna. No, not even you Madonna!

She also ditched the roots for a full-on head of blonde perfection.

HER FIERY FATE AS A RED HEAD

Of course, she couldn't be red without chopping it all off.

For RiRi it's another day, another bob.

It grew out to a stunning mane that left Drake drooling.

Sometimes she let is all hang out, like a true rebel.

28. ROLLING ON THE RIVER

RiRi definitely found her inner Tina Turner with this look.

She jumped on that braid trend with her long red locks.

It was bright, faded, short, curly, and at times ... really, really long!

Arguably one of her sexiest hairstyles to date, everyone fell in love with Rihanna's extreme ombré cut and color.

The Rihanna version of perfection.

34. STRAIGHT TO THE POINT

Dominating the stage with every hair change she makes.

In this color her natural curls are her mane advantage.

When she was feeling particularly feisty, she busted out her killer bangs again.

AND JUST IN CASE YOU FORGOT

This is what Rihanna looks like today, and we wouldn't want her any other way.