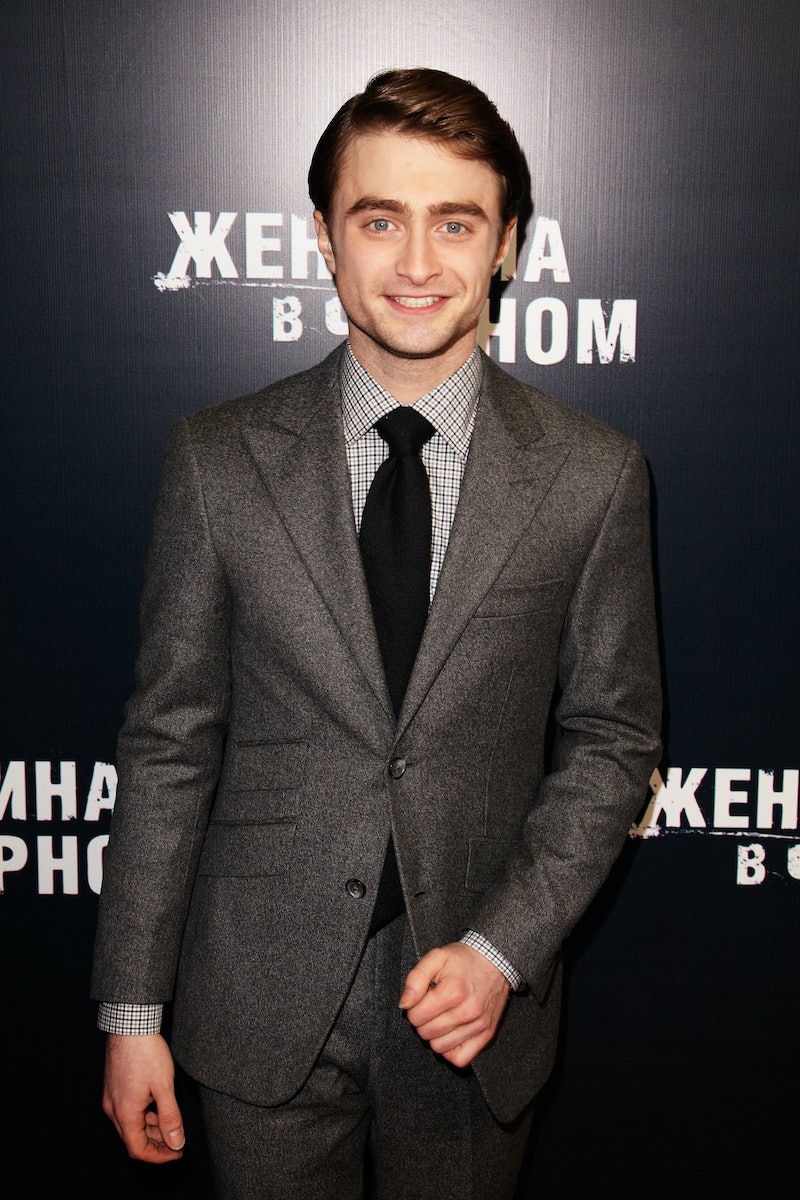 Today the world's most successful mudblood can finally have a quarter-life crisis. Daniel Radcliffe has been in the public eye for 13 years now, and over that time he has changed drastically. With all of the talk about the McConaissance, it's a wonder that few have discussed the Radformation, or the gradual change of Daniel Radcliffe over time. We've seen him go from small child to cutesy teen to grown-up serious actor, with all of the struggles, voice changes, and forced smiles that entails. Sure, some of his change might just be called "aging" or "awkwardly hitting puberty mid-movie-franchise," but fans have loved watching every swish and flick, and we're all glad to see him still going today.

Dan got his movie-acting start at age 12, although he made a small appearance in a made-for-TV movie at 10. His screen test shows he was born for the theater, and he has said that the films "gave me a purpose and sense of belonging and confidence that I doubt I ever would've had" and that if he could "die on a film set when I'm 80, I'll be happy with that." So happy birthday, Daniel, and I hope the next 25 years allow you to keep doing what you love.

In the beginning there was the Daniel and the other two kids, and it was adorable. I mean, look at their wistful smiles, untouched by the cynicism of Hollywood. And I personally think this was the Golden Era of Hermione Hair.

From a very young age, Daniel adopted a put-together style on the red carpet. Not that we'd expect anything less from a future multimillionaire. I will never grow tired of looking at cutesy young Harry.

The first Harry Potter movie that paid Daniel over $10 million was Harry Potter and the Goblet of Fire. His lowest paycheck for an HP film was the $1 million he got for the first installment, and his highest sum was the $33 million he was paid for his performance in the last movie, Harry Potter and the Deathly Hallows, Part 2. He is now valued at around $100 million, and he's often asked if being rich for so long has bothered him. Charmingly, he answered "no" last year, reminding everyone that he's a bit of a penny-pincher.

By 2004, we saw Harry, Hermione, and Ron go from adorable little kids to skulking teenagers.

The Good Sense of Humor

I would imagine that some child stars get sick of hearing about their big break (ahem Drew Barrymore and E.T. ahem), but Daniel has always been a good sport with the Muggle humor. He even recorded a video mocking the actor-character relationship and Harry Potter for Funny Or Die back in 2010, and it's a gem. He's also laughing at himself about his nudity in recent films, which only makes him more adorable.

The Stealth Feminism and Overt LGBT Allyship

Although he may not bring it up in every interview, Daniel Radcliffe seems like a stealth feminist. Watch the video above to see how he feels about "the friend zone," which he thinks is a male construct. He has also been an outspoken advocate for the LGBT rights movement for years, and even recorded a Trevor Project video. Hopefully we'll see even more overt feminism from him in the next 25 years.

The Life After Harry Potter

Even though Daniel has said he would participate in another franchise, he's not rushing back to commercial Hollywood anytime soon. His most recent projects have been indie rom coms and meaningful accounts of the Beat movement, and his upcoming film is about Frankenstein. It seems that he's doing what he loves, and that's truly magical.