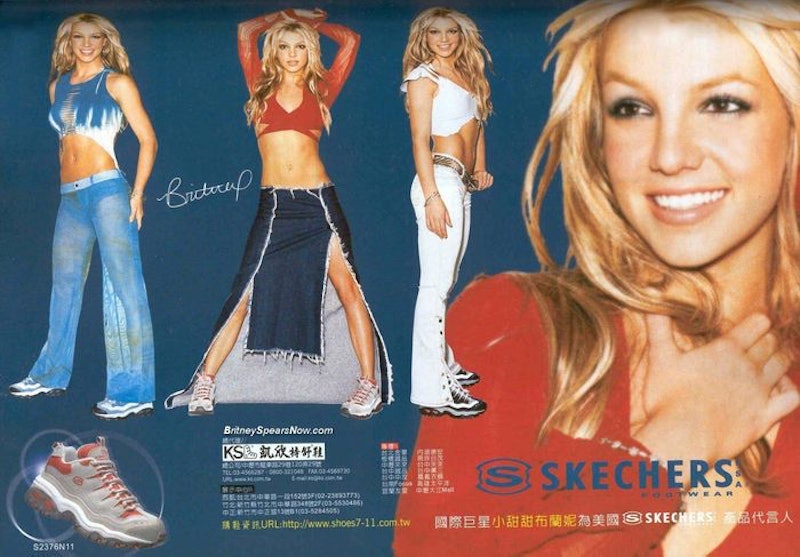 Some trends flare into greatness and die down fast. Take the miniature backpack purse, for example. It came, it saw, it conquered, it went away quickly, and because of that, it'll always be immortalized in our memory. We'll look back at the mini-backpack with loving nostalgia and just the slightest twinge of shame — but it's the trends and brands with long half-lives that really embarrass us. Not to be insensitive, but why are you guys still here?!

Take Skechers: They've been around for 22 years and have been cool for about half of that time. Despite several rather clumsy falls from grace, the brand still pumps out sneakers and celebrity representatives like it's their job. When does the madness end?

The Sketcher sneaker was birthed in 1992, and it didn't take Skechers long to become the must-have sneaker of the 1990s. In fact, the chunky shoe with the squiggly colors on the side quickly became the ultimate oxymoron: a sexy sneaker. And the brand did it with the help of the decade's hottest pop stars.

Sneakers are for gyms and losers, until Christina Aguilera pairs them with an unbuttoned schoolgirl shirt and a lot of attitude, and then sneakers are for hot girls with drama on their mind. If you were more of a Britney Spears fan, her Skecher advertisements taught you that sneakers like these were for pairing with any outfit, from a questionable pair of sheer bellbottoms to a ridiculous denim maxi skirt. Getting Britney and Christina to advertise something as, well, unsexy as Skechers was one of the biggest corporate power plays of the era. Skechers weren't just shoes that took you from one place to the next. Skechers were shoes that got you in trouble…in a good way.

But Skechers' blaze of sexualized glory didn't last long, and like other '90s/'00s trends, it faded into oblivion — or rather, it should have faded into oblivion. See, once you've tasted fame, it's hard to live without it. No one was wearing Skechers as a fashion statement any more, so Skechers decided corner the sexy workout gear market.

The premise was ridiculous and the silhouette was truly hideous, but Skechers had big plans for the Shape-Ups, which promised to "promote weight loss, tone muscles, improve poster, and reduce stress on knees and ankles." And what worked for Skechers in the past? Why, getting a big star on board with their shoes, of course.

Unfortunately, having Kim Kardashian push weird-shaped workout shoes just isn't the same as having Britney Spears pair her Skechers with white bellbottoms. The sneaker's cool factor was hanging out somewhere in the '90s and it wasn't coming back. To make things worse, Skechers was allegedly lying about the shoe's benefits. In 2012, the Federal Trade Commission claimed that Skechers falsified some of those clinical studies that said Shape-Ups would give you an amazing body, and Kardashian backed down from her marketing gig, flustered and back in stilettos.

Shape-Ups aren't the only public embarrassment that Skechers has faced, either. In 2010, the brand launched BOBS, which — to make a long story short — equal TOMS. Skechers's BOBS not only look exactly like TOMS and have a similar name, but they give back to charity, too. According to my internet sources, BOBS were pulled from the Skechers website in 2010, probably due to high levels of internal management embarrassment, but they're back and TOMS-ier than ever.

Thankfully for the star-struck among us, Skechers just named a new celebrity spokesperson to rep their fading brand. Demi Lovato recently announced that she'll be taking on the Skechers gig, like Ashlee Simpson and Carrie Underwood before her. Her face on the product will certainly boost sales, but it's unlikely that Skechers will ever top their turn-of-the-century fame, when Britney Spears wore them on the cover of Forbes and all was right with the world.

More like this
10 Nail Trends That Perfectly Capture The Early 2000s
By Paris Giles
I Tried Marilyn Monroe's Makeup Tricks, & They're Pretty Genius
By Olivia Rose Ferreiro
Machine Gun Kelly Wore A $30K Diamond Mani To The BBMAs
By Paris Giles
How To Master Baby Braids, According To TikTok
By Tomi Otekunrin
Get Even More From Bustle — Sign Up For The Newsletter