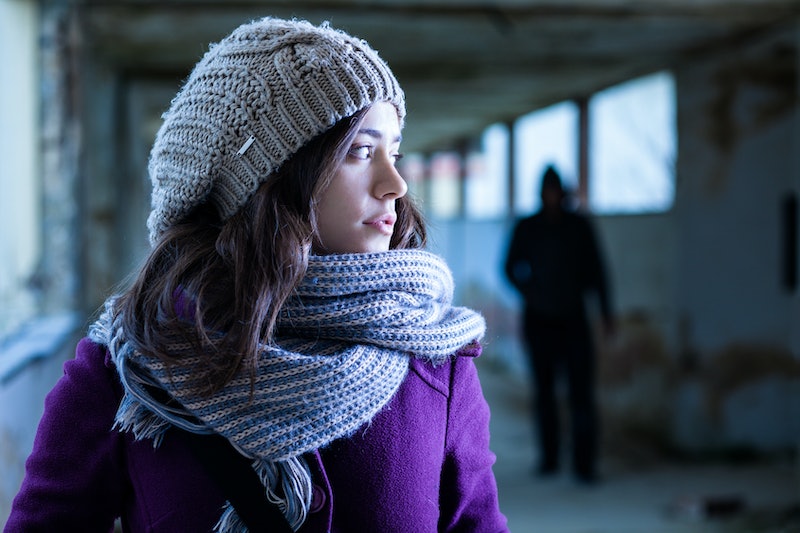 Though I walk through the valley of the shadow of Los Angeles public transportation, I shall fear no street harassers. It was mandatory that I repeat this mantra to myself. It was my first week living in Los Angeles, and I was armed with no car, no job, and the scattered disposition of a sheltered liberal arts student.

I was fresh off my freshman year, working my first unpaid summer internship. I was charged with the task of heading to Melrose to review some of the boutiques I'd find there. The details of my assignment were sparse — all I really knew was "get there" and "write something about something you see." But first, I had to cross The Valley. Unfortunately for me, I was staying out in the boonies of Van Nuys — fine if you're driving, a cuddly two-plus hour bus ride if you're bussing.

I didn't make it a block before I was stopped by (translation: hollered at) one guy loading up his van (he asked if I'd like to join him at his new apartment for a movie later), and solicited for an "erotic massage" by another dude who pulled up next to me in his truck. After I'd boarded, departed, and made my way to my second bus stop (are you getting it yet? It was a long journey), a second man in a truck pulled up next to me. I come from an overwhelmingly polite city, so I assumed that he was asking for directions or informing me that my wallet had fallen out of my pocket. I tilted my ear towards him to hear what he was saying.

It wasn't because of my breathtaking beauty, or my mind-melting body, or the way my hips did or did not move back and forth while I walked. As most women who've existed in public while female will tell you, it also had nothing to do with how I was dressed — in fact, I was wearing long sleeves, in July, in Southern California, defying all logic. The solicitations continued steadfastly throughout the summer, no matter what I wore. I couldn't even walk the block to the post office without being leered at.

Get out of this situation, I told myself, there's no one on this street to hear you scream. We reached an intersection, where I'd crossed to the other side of the road again. He followed me. I looked him in the eye. He looked back, moved closer. Statistics popped up before my eyes: One in four girls in America will be raped in their lifetime. Every two minutes, someone in America is sexually violated.

While I've never been as heavily assailed with offers to sell my body as I was during that summer in the Valley — it happened in waves that stagger me even now — this was hardly an isolated event indicative of problems unique to an isolated environment. No matter how nice the neighborhood — Brooklyn Heights, SoHo, the Upper West Side, a train station in Palo Alto, CA a WalMart outside of Oberlin, OH, the bus stop outside of a high school in Portland, OR — every city has offered me these unwelcome leers, shouts, and provocations.

But it was that summer that I learned that to these men I wasn't a human college girl experiencing her first summer away from home, trying to make her way around a strange city. I was just a chick on the road, something to look at while they distracted themselves from their lives, or their spouses, or their sense of human decency. What I wanted was irrelevant to them.

I came back to Los Angeles three years later, no longer a frightened teenager — rather, a frightened twenty-two year old who knew how to cover her fear with jaded remarks to herself and to her Twitter followers. This time around, I'd learned the skill of avoiding eye contact with the guys who might take it upon themselves to comment on whether or not I'm smiling.

I was cautious, everywhere, just like I'd always been; just like I know so many women feel like they have to be based purely on the body they find themselves in. And so I lived my post-grad life in LA. I tried to meet new people, find a job, a place to live. I went outside with less fear every day. I always paid attention to my surroundings, glaring daggers at the hoots or the leers, but whatever, there was nothing I could do about them. All I could do was me.

Though I walk through the valley of the shadow of Los Angeles public transportation, I shall fear no street harassers.

I was walking home from the bus station one day when I cut past the high school. Halfway down the block, I noticed a presence behind me. A young guy, about my age, though maybe a summer school student, ambled slowly on a bicycle. I glanced back at him, surveying; he looked me in the eye. I kept walking. He stayed behind me.

Am I imaging this? He's not as vocal as some of the other guys have been. Maybe he's just some kid with a crush on a stranger. Maybe he thinks he's being cute. Maybe he'll say something — surely by now he knows he's freaking me out.

He pulled ahead of me, turning at the end of the block. Maybe he's gone. Then I saw him: Hiding behind a fence, waiting for me. He peeked his head around to see how far away I was. A few beats. Then he did it again.

Get out of this situation, I told myself, there's no one on this street to hear you scream. We reached an intersection, where I'd crossed to the other side of the road again. He followed me. I looked him in the eye. He looked back, moved closer. Statistics popped up before my eyes: One in four girls in America will be raped in their lifetime. Every two minutes, someone in America is sexually violated.

Even if he couldn't tackle me to the ground right then and there, I only live a block away. If I run there he'll know where I live, and I'll never feel safe in my home again. He could come back anytime.

Panicking, I charged into the intersection.

I would not recommend charging into the middle of a busy Los Angeles intersection. But when you're being stalked by a guy who's looking at you like you're more steak than human, I'm just saying, it starts to seem like the better option.

Amidst the honks and yells from angry drivers, I made a bee-line for a car occupied with two young women about my age. They looked like they were just heading home for a good old fashioned Netflix binge, and I related to that. In any sense, confronting the stranger danger of these two ladies in this car seemed like a better idea than confronting the stranger danger watching me from the sidewalk, so I took the gamble.

My phone's dead and there's a creepy guy following me home, I said, pointing behind me to the biker planted on the corner staring at me. They gave me a ride home. I never saw the guy again.

When my brother and my sister-in-law got home that night they were sympathetic, but mostly unfazed. That's just the way it is. Welcome to the city. Be glad he wasn't following you home in a car.

I called the police and gave a description of the guy so they could survey the area for him, just in case there was another girl walking home that day. The officer was sweet and empathetic, and he told me that I might want to arm myself with pepper spray for further outings. My brother tried to get me to carry around a knife. They told me that it happened all the time, and that this just happened to be my initiation.

I was walking down a busy street in Brooklyn a couple years ago when a male business owner three times my senior (and his three buddies) hooted and hollered at my shorts as I passed. I was barely twenty. I was waiting for the bus outside of my high school in Portland when some guys pulled up and screamed at me to smile. Once, a sixty-something year old man pulled up next to me and offered me a ride. If I had gotten in, would I have been asking for it?

I'm told that this is how it is. That all I can really do is learn the best self-defense tactics, and carry a knife.

This is how it is: We live in a world where we react to a woman being stalked down the street not with Oh my god, I can't believe that happened that is so fucked up but with a Yeah, dude, welcome to the city. Carry mace. Where women are told You should do [insert self defense art here], you know how men are, instead of asked Why do you think so many of our men are like this? What do you think we can do to change it?

Though I walk through the valley of the shadow of Los Angeles public transportation, I shall fear no street harassers.

It was a useful prayer of sorts. But these days, I have a simpler mantra: Fuck that noise.

More like this
How To Fight For Reproductive Rights, Based On How Much Time You Have
By Courtney Young
The Most Compatible Life Path Numbers, According To Numerologists
By Kristine Fellizar
What Is "The Ick?" The TikTok Dating Term, Explained
By Courtney Young
9 Alternatives To The 3-Day Texting Rule In Dating
By Ginny Hogan
Get Even More From Bustle — Sign Up For The Newsletter