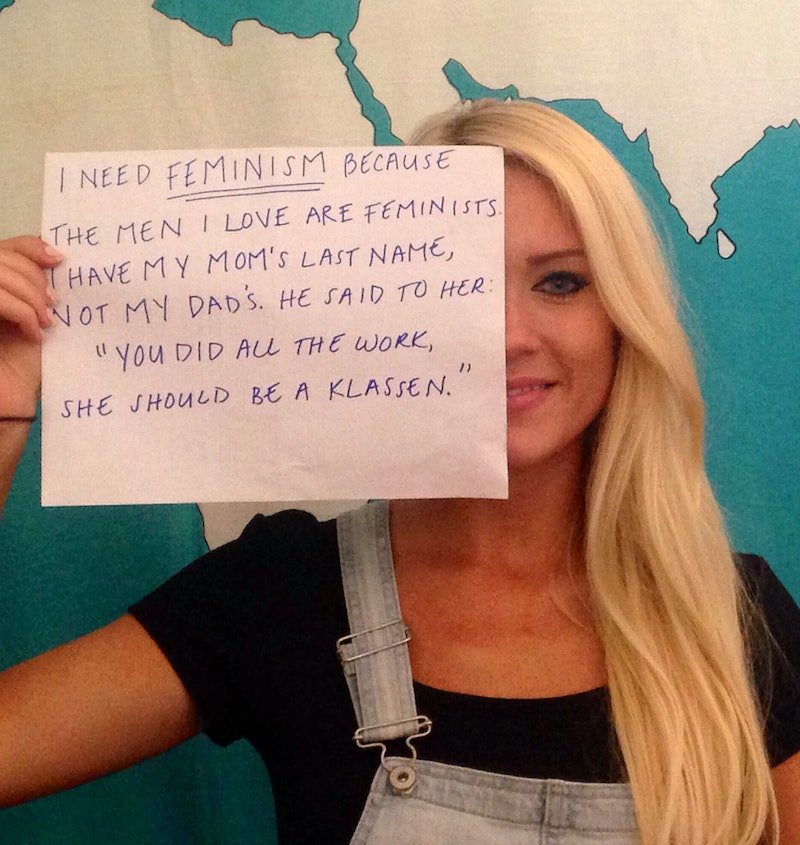 The Facebook group "Women Against Feminism" had a moment Monday. The group, which says it is “against modern feminism and its toxic culture,” (and presumably for Robin Thicke?) posted photos of women holding pieces of paper explaining why they don't need feminism. Of course, the fact that feminist movements and beliefs are the reason that said women can a) write, b) form an activist group, and c) express themselves freely seems lost on them.

The group has over 10,000 likes, and was trending on Twitter all afternoon. Of course, we could spend a bunch of time explaining why mentalities like "I don't need feminism because my sex life is not a political agenda" are deeply, deeply misguided — and we did.

But as the smoke coming out of our ears clears, we thought it would be best to hop on the Tumblr-inspired train and make it clear why we here at Bustle need feminism. I solicited our many writers and editors and asked them a simple question: Why do we need feminism?

In the flood of responses I received, I was interested to see that some of us chose to write signs that spoke for only ourselves ("I need feminism because... ), while others spoke in terms of why "We need feminism." Perhaps that was just the result of an unclear prompt on my part, but I like to think it represents something more: Feminism is both collective and highly personal. There are many reasons I need it, and many reasons we all need it — and in the end, they are all true. Because contrary to Women Against Feminism's assertions, feminism is not a strict ideology: We write and rewrite our own definitions of what it means to each of us everyday.

So let the Interweb record show: Here's why we need feminism — today.