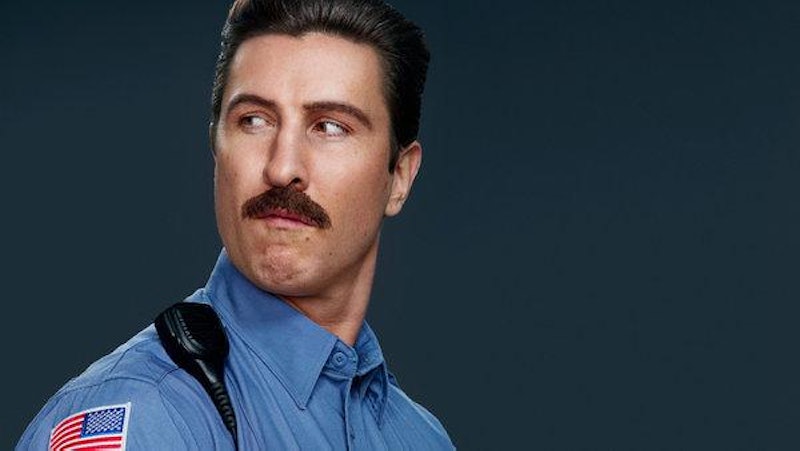 This is great news for the inmates and tragic news for the audience. Orange is the New Black's most heinous correctional officer, George "Pornstache" Mendez, has been the man that we all love to hate since his very first appearance in season 1. From harassing the inmates verbally and sexually to sneaking drugs into the prison, even his most sympathetic qualities weren't enough to make up for all the, well, Pornstache. However, Pablo Schreiber confirms Pornstache won't return to OITNB and I'm honestly not sure whether to cry or cheer. The rumors that Pornstache wouldn't be in season 3 have been going on for months, but I was sure that casting Mary Steenburgen as Pornstache's mother would mean at least one episode of Pornstache goodness.

Apparently not. Schreiber told the New York Post that he had taken a starring role on an upcoming HBO show called The Brink, which, compared to his guest role on Orange is the New Black, was a better opportunity for him as an actor. However, he hasn't ruled out the idea of ever returning to OITNB. "I would go anywhere that [Jenji Kohan's] working," he said. "And I know that our paths will cross again soon, whether it's on Orange or on a future project."

To be fair, Pornstache as a character isn't really the kind of person you miss. At least 98 percent of the things that he did on screen were so heinous that even his boss, Joe Caputa, was practically salivating at the idea of firing him. When we last left Pornstache in season 2, he was being dragged off to jail for raping inmate Dayanara Diaz and getting her pregnant, unaware that it had been Officer Bennett who had been in a romantic relationship with Daya the entire time and who was the true father of her child. Pornstache was also madly in love with Daya and promised to return to be a good father to her child on his way out, which seemed like the perfect set up for later conflicts between himself, Daya, and Bennett.

However, it appears that with Schreiber about to dazzle the world on The Brink, then we'll have to look to Steenburgen's Momstache as our new villain of season 3. After all, the woman who raised Mendez into the man that he is today has got to be twice as terrifying and four times as corrupt, right? Sure, she might not take the sting out of being unable to follow that mustache as it stomps around the prison giving shots to inmates with ugly faces, but it would certainly help. Especially if Momstache comes with a bonus episode delving into Mendez's past.

More like this
'Obi-Wan Kenobi' Takes Place After This Key Star Wars Movie
By Arya Roshanian
Here’s Everything Coming To & Leaving Netflix In June
By Alyssa Lapid
Britney Spears Met The Weeknd & Sam Levinson, So She May Actually Be On 'The Idol'
By Jake Viswanath
Jack's Facial Hair Moments On 'This Is Us,' Ranked
By Grace Wehniainen
Get Even More From Bustle — Sign Up For The Newsletter