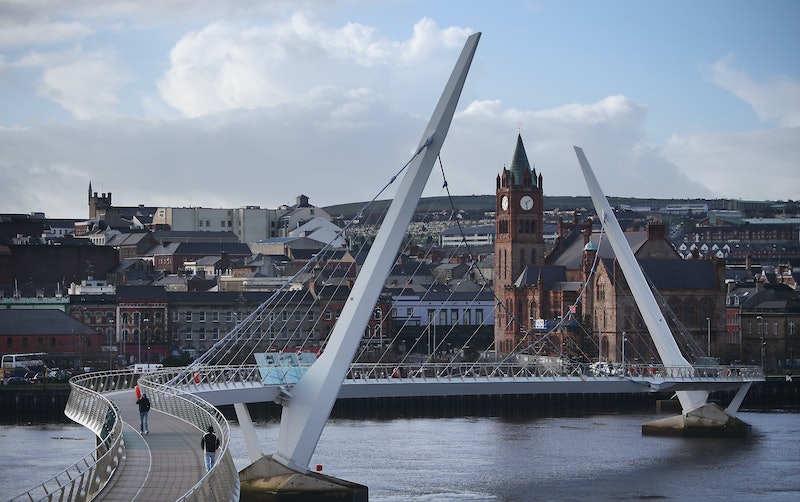 Abortion rights in Ireland are basically non-existent. Since the 1800s, abortion has been outlawed in the Catholic state, even in cases of rape and incest, and those who obtained or administered abortions faced lengthy prison sentences — or, until the latter half of the 20th century, the death penalty. The sad state of abortion affairs in Ireland recently attracted the attention of the United Nations. In a just-released report, the UN urged Ireland to revise its constitution to include abortion, or else the government will be violating the rights of women.

The report, issued by U.N. Human Rights Committee, honed in on Ireland's Protection of Life During Pregnancy Act 2013, which allows doctors to provide an abortion when there is serious risk to the mother's life, including from suicide. The 2013 law was partly spurred by the death of Savita Halappanavar, an Indian woman living in Ireland, in November 2012. Halappanavar was miscarrying at 17 weeks and denied an abortion, reportedly told by doctors that she was in a "Catholic country"; she later died of organ failure and sepsis.

The act was also supposed to clarify some provisions in Ireland's constitution, which was amended in 1992 because of the "X case." Then, the Irish Supreme Court allowed abortion in serious health cases, but the terms were never outlined in legislation.

Though the 2013 law tried to rectify that, it still carries with it a batch of red tape: two doctors must concur that a woman needs an abortion in the instance of physical illness, while three doctors must sign off on a woman who needs one because of suicidal thoughts. These restrictions, as well as the still-vague definition of what exactly is a "substantive risk," worried the U.N. committee.

According to the U.N., the circumstances under which Irish women can have abortions are still "highly restricive." The committee is concerned about the criminalization of abortion — which is currently set at 14 years in prison — as well as the presence of biased crisis pregnancy centers, the "excessive degree of scrutiny" for women thinking of suicide, and the "severe mental suffering caused by the denial of abortion services to women seeking abortions."

This is the advice the U.N. gave Ireland on how to change its abortion policies:

The State party should:

(a) Revise its legislation on abortion, including its Constitution, to provide for additional exceptions in cases of rape, incest, serious risks to the health of the mother, or fatal foetal abnormality;

(b) Swiftly adopt the Guidance Document to clarify what constitutes a “real and substantive risk” to the life of the pregnant woman; and

(c) Consider making more information on crisis pregnancy options available through a variety of channels, and ensure that healthcare providers who provide information on safe abortion services abroad are not subject to criminal sanctions.

“The UN Human Rights Committee is very clear on what needs to be done by Ireland to meet its civil and political rights obligations," Betty Purcell, spokesperson for the Irish Human Rights and Equality Commission Designate, said in a statement. "Now it is time for the State to act."

Will Ireland finally revise its abortion laws? One would hope so, but this isn't the first time Ireland has been harshly criticized by an international ruling body.

In 2010, the European Court of Human Rights said the country failed to properly implement its constitution when it denied a woman in remission from cancer from obtaining an abortion. The woman reportedly wanted an abortion because she feared the pregnancy would bring back her cancer. The court ruled that Ireland must make it possible for women with serious health risks to have legal abortions — and do so in such a way that doctors also aren't penalized for providing abortion as an option.

But standing in the way of legalizing abortion in Ireland is the Catholic Church, which doesn't condone abortion in any case, even when a woman's life is at risk. The only time the Catholic Church allows any form of abortion is when it doesn't cause the "direct killing" of the fetus, such as the total removal of the uterus to treat uterine cancer or the removal of the fallopian tubes to cure an ectopic pregnancy.

Because of the Church's overreaching views on abortion, bishops in Ireland spoke out against the Patient Protection of Life During Pregnancy Act last year, urging their parishioners to also do so. Their campaign even spread to the United States when Irish Prime Minister Enda Kenny was giving the commencement speech at Boston College in May 2013. Cardinal Sean O'Malley, head of the Boston Archdiocese, boycotted the commencement after Boston College refused to rescind Kenny's invitation. The graduation also attracted dozens of Boston-area anti-abortion protesters.

In the meantime, Irish women who need abortions are stuck — literally. Unable to have lawful one in their home country, thousands of Irish women are forced to travel to England and Wales for abortions. According to the Irish Family Planning Association, an estimated 160,000 Irish women have traveled overseas for an abortion between 1980 and December 2013.

But as the U.N. committee pointed out, not every Irish woman can afford to travel to England. As a result, thousands of Irish women are still left without a choice at all.

More like this
Sandra Bullock, Girlboss Extraordinaire
By Matt Harkins & Viviana Olen
How To Support Gun Control Reform Right Now
By Morgan Brinlee and Carolyn Steber
Twitter Was Saying The Same Thing About Sam Ryder’s Surprising Eurovision Result
By El Hunt
Taylor Swift, Kerry Washington & More Speak Out On Uvalde Mass Shooting
By Jake Viswanath
Get Even More From Bustle — Sign Up For The Newsletter