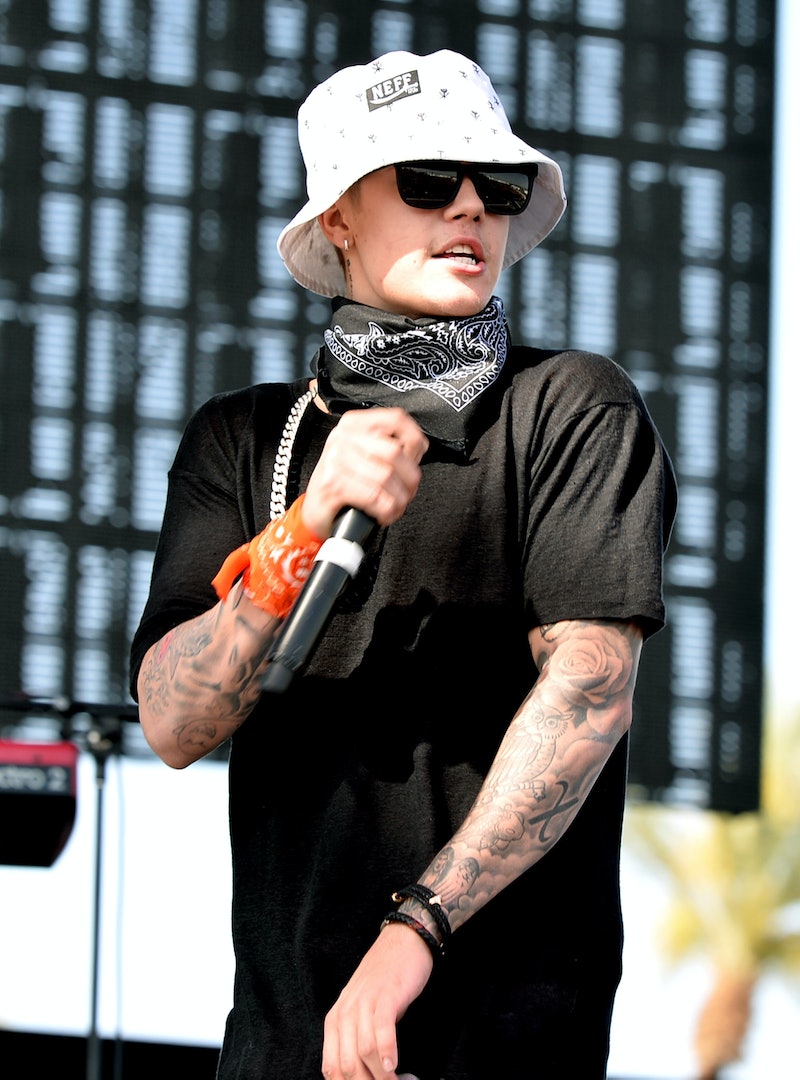 With all the stuff that Justin Bieber has been up to lately, it's easy to forget that his actual job is to make music, not to make scandals. Shortly after pretending to be disabled to get to the front of lines at Disneyland—can't he just pretend to be Justin Bieber? I feel like that would probably get him to the front, or at least his money could—Justin Bieber released snippets of 11 new songs on Instagram Wednesday night. That's right, as E! Online pointed out, he could very well be trying to drop his own Beyonce-esque secret album.

But since recently Bieber's life has been more about his escapades and his on/off girlfriend Selena Gomez, it's all too easy to read into Bieber's lyrics to try to find hidden meaning. But instead of saying that the Biebs is hung up on Gomez/is over Gomez and regrets/doesn't regret his recent transgressions, I'm going to rank his new songs purely on their own merit. Do they have good melodies? Are the lyrics fresh and catchy?

Obviously these tracks aren't radio ready and are only a few seconds each, but I can critique what he's given to us for now. Take a listen and see if you agree!

This is the only song Bieber titled in his caption and in addition to being about cold water it's apparently also about soft shoulders. But it's also an acoustic track which I hope he sticks with when he puts the finishing studio touches on. Bieber and acoustic music remind me of his start as a fresh faced YouTube kid with no DUIs.

Keeping things going strong, this track will likely be that song you don't want to admit you like, but also makes for really good club dancing music.

Basically this one sounds like it's being sung by a robot. I don't know if that was intentional or not but if it was, that's pretty cool of Bieber to branch out like that. I actually have a soft spot in my heart for this one because the lyrics are ridiculous. But the kind of ridiculous Sharknado was, in that it's also kind of awesome. Especially the line, "you're a superstar; you should be named after a planet, dammit!" I mean sure, stars and planets are different things and it's not really a good thing to be named like Pluto or Uranus or something, but I get his point, I think? Also the lyrics reminded me of "Dammit Janet" and I like that song a lot.

This song's caption was a crown emoji so maybe he's going to call it "King" or something? This song sounds the most complete, and it's kind of a slow number. I don't hate it and I don't love it. I am ambivalent about this song.

This one has radio single potential. Be prepared to probably hear this one a lot if you listen to the radio. (Do people still do that or is it just Spotify these days? I can't keep track.)

This is the Bieber version of a Miley Cyrus song because it's talking about sex and drugs. The Beliebers are going to dig it because they are probably going to pretend Bieber is singing it to them.

Bieber's mom, Pattie Mallette, is not going to be pleased.

The rhyming lyrics in this tune are so bad. It's like Bieber took an elementary school level poetry class and turned it into a song.

The melody of this song has potential but Bieber does so many vocal runs that it sounds like he was possessed by an angsty Christina Aguilera.

This one opens with the line, "I'm close to finishing" with no context so that's a little jarring. Also it's auto-tune central which is a shame because Bieber's not a bad singer; he shouldn't have to rely on auto-tune.

Soulful has always been Bieber's strong suit, so this song will probably do well.

All in all, he does have some stinkers in there but he also might have some hits. Besides once they're three minutes long instead of 15 seconds they might all be good. Stranger things have happened. For Bieber's sake I almost hope he does knock it out of the park because he needs to get back to focusing on music and less on illegal activities.