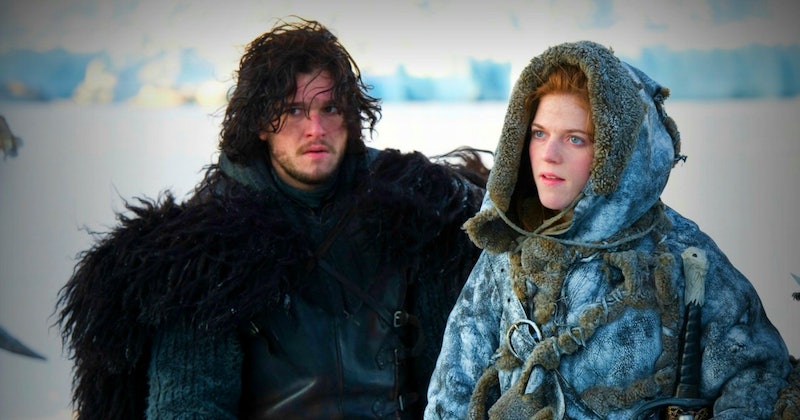 Jon Snow and Ygritte may have lost their millions of chances to ride off into the sunset together and live happily ever after on Game of Thrones (hahaha, like anyone could ever be happy on this show), but, luckily, love is still alive for their real person-counterparts. Apparently, Game of Thrones stars Kit Harington and Rose Leslie are maybe dating in real life again, about one year after reports that the couple broke up hit the web. Rumors about their initial hook-up hit the web back in 2012, when Jon Snow and Ygritte were still and item-to-be on the series.

Of course, since this is the age of the Internet and pictures mean more than text ever could, paparazzi caught the two at LAX getting on a flight out of LA together recently looking very much the couple. Though they didn't hold hands, they were rather close. Additionally, fans and other paparazzi outlets have caught the two former co-stars hanging out together quite a lot in London, both alone and with Game of Thrones' Samwell Tarly himself, co-star John Bradley-West. Of course, all the pictures are on Twitter, thanks to some very eagle-eyed and devoted fans.

Sure, there's always the possibility that Leslie and Harington aren't a couple, since there's been no official confirmation — but look, I believe in love and hope. I'm totally rooting for these two. And hey, when you think about it, they're already off to a much better start than Jon Snow and Ygritte were!

More like this
'Games of Thrones' Fans May Recognise This 'Conversations With Friends' Location
By El Hunt
The Grey's Anatomy Season Finale Finally Revealed If Japril Got Back Together
By Brad Witter
Oops! The 'Stranger Things' Monopoly Game Has Spoilers For Season 4
By Alyssa Lapid
20 Photos From The 'Stranger Things' Season 4 Premiere To Make You Feel Old
By Alyssa Lapid
Get Even More From Bustle — Sign Up For The Newsletter