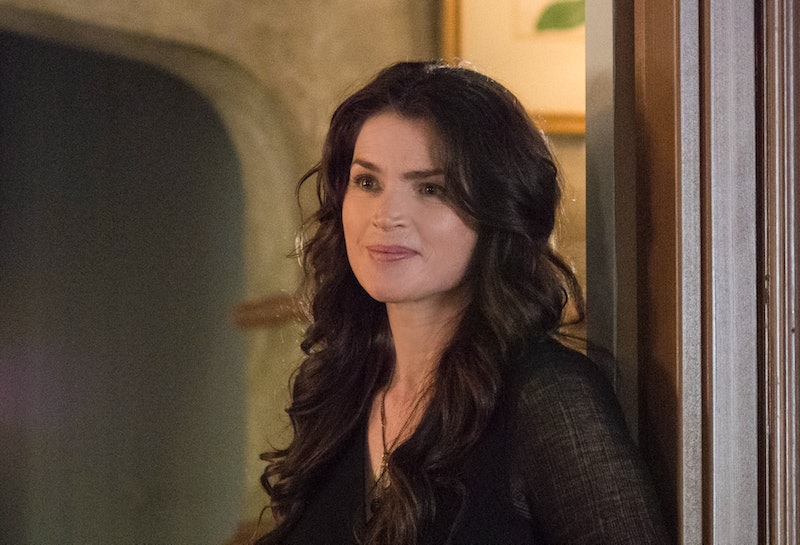 On Lifetime's Witches of East End, Julia Ormond plays a witchy matriarch, Joanna Beauchamp, who's not so easy to love. “Joanna’s pretty challenging because she’s more flawed in her choices,” Ormond told The Canadian Press. “She’s the straight one. The challenge for me is to keep it likable while she’s straight and so disconnected. I struggle with that.” In her real life outside of Witches of East End , Ormond has faced a similar problem with balancing the media's opinion of her.

A couple of splashy roles in '90s movies like Legends of the Fall and Sabrina made her a Hollywood "It" girl, then a couple duds and a break had the same people calling her a has-been. "I chose to take myself out of Hollywood because I was very confused and felt like I had gotten into a rut," she told Redbook. "So I took some time off, and when I decided to come back in, I knew that I didn't want to come back to that same place. I used to believe I'd be able to come back a little older and refreshed, but it seems to be that all people remember is my rut."

It turns out that, during that "rut," Ormond has been doing some pretty amazing things. Of course, we're perfectly happy to see her pop up again on Mad Men and in The Witches of East End. But perhaps we should recognize that, when she was out of the limelight, she was being kind of a hero for humanitarian causes. Here, a rundown of some of her outside-the-spotlight activities.

She Used the Power of Hollywood for Good

Ormond is the type to roll up her sleeves and get to work solving some of the world's major problems. "I learned that if you get involved with whatever clout you have, and you turn that to something else, it’s very satisfying," she told Canada's Postmedia News. "It’s not draining. It gives back to you in spades."

She's a founding co-chair —now founding chair emeritus — of FilmAid International, an organization that brings films to struggling parts of the world for both education and entertainment. For example, this past March FilmAid hosted a screening of The Red Balloon for refugee Syrian children as part of the he #WithSyria campaign. But that's not the only way she's used film to make a point. Ormond, a former Goodwill Ambassador to the United Nations, was the executive producer of the documentary Calling the Ghosts: A Story about Rape, War and Women, about two Bosnian Muslim women's experience in a Serbian concentration camp. The documentary won both an Emmy and a Robert F. Kennedy Journalism Award.

She Even Founded Her Own NGO

Ormond is also the founder of ASSET, the Alliance to Stop Slavery and End Trafficking, an NGO (or non-governmental organization). “You look at the products in your home and you realize slavery is all around you — in most cotton, a lot of coffee and cocoa, and in the charcoal which goes into steel production," she told New York. "You realize there’s more you can be doing.” And so she does — even when it's overwhelming. "I’ve had my periods of switching which issue I’ve given my focus to and then trying not to hemorrhage all over the place in terms of just doing everything," she said in Postmedia News. "But it’s been a really big part of my life to have set up an NGO and then having my own and working out the strategic part. That’s probably my favorite.”

She Takes Mad Men Way More Seriously Than You

Okay, maybe this doesn't have any kind of humanitarian bent, but Ormond is pretty hardcore about Mad Men. Even before she appeared on the show as Marie Calvet, Megan's mother, Mad Men was a bigger deal to Ormond than to the rest of us. "I did say to ['Mad Men' creator] Matt Weiner at one point that a very committed relationship that I had actually came to an end and was finally over when he watched a Mad Men episode without me," she told the Huffington Post. "I was like, 'You're toast. We're done.'"