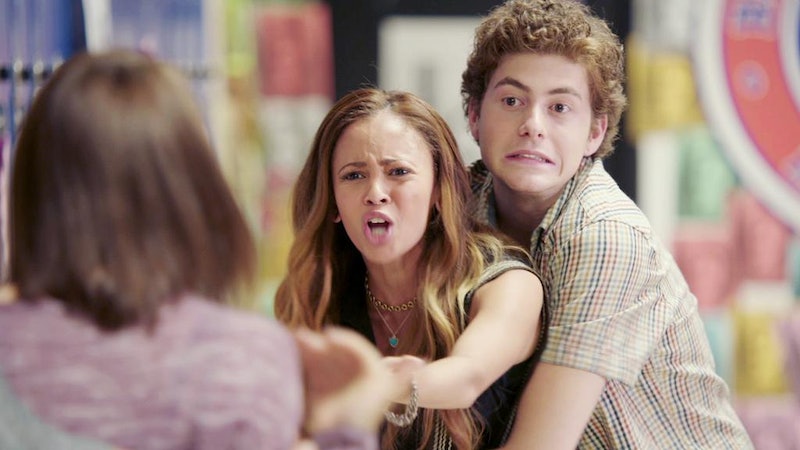 Tuesday's episode of Finding Carter was the most explosive yet, and Carter's friend Bird was at the center of all the action. In "Now You See Me," Carter and Bird got into their very first fight, and the result was far more shocking than anyone could have anticipated. For those of you who missed the recent episode of the MTV kidnapping drama, here's what went down: Bird revealed a painting of Carter at the school art show. Bird's artistic rendering of Carter — in which Carter's face was melting off — didn't exactly sit well with her subject, who demanded that Bird take down the painting in front of the entire audience. (And you wonder why I think Carter's awful?) The girls eventually made up (Bird admitted she probably should have asked, and Carter realized that the painting was art and not a personal attack) and Bird admitted something about the painting that made us question everything we knew about this show.

It turns out that Bird wasn't really painting Carter — she was painting a version of herself in order to cope with a past trauma. Bird told Carter this after Carter saw drawings Bird did of a dark figure with a mask. Though Bird didn't reveal details, it was clear that something awful happened to Bird — something done by the person wearing the mask. But the question here is, what happened?

We know that Bird is frequently alone in her house, something that makes her seek out friends to spend time with so she isn't by herself. While we assumed that her desire to be around others was out of loneliness, perhaps it is more than that. Perhaps Bird was attacked by an intruder while left alone in her house, and possibly even raped or assaulted by the stranger. It would explain Bird's melting portrait of Carter, as the attack could trigger a loss of identity and depression, as well as her hesitance to let Carter see the drawings in the first place.

Bird's apparent attack has given us insight into her character, but given the mysterious circumstances of the attack, there is a possibility that Bird's story might fit in with Finding Carter as a whole — perhaps more than Bird even knows. Though Finding Carter is a family drama, it's also a mystery. We have yet to uncover why Carter's kidnapper, Lori, stole her away from her family in the first place. What if the person who attacked Bird was connected to Lori?

There's one theory about Bird's attack that connects Lori and Bird's attacker, and it might answer a lot of questions about Carter's kidnapping. Finding Carter has long been compared to The Face on the Milk Carton, a book series about a teenager named Janie who is kidnapped by a woman in a cult. The woman, knowing that the cult would harm the child, gives up the baby to her parents, who assume Janie is their daughter's child. Could a similar situation have happened in Finding Carter? It would make a lot of sense given Bird's attack. What if Lori was a member of a cult or gang and was ordered to take Carter in order to protect her status within the group? Lori may have felt guilty about taking Carter, and decided instead to raise her as her own, abandoning the cult. Members of the group could live in Carter's town and prey on the people within it — including Bird.

The mysterious nature of Bird's attack may be a hint that Bird's attack was no random thing. While many attackers do wear masks, it seems like these masks are of a very specific variety — perhaps one that would signify that the attacker is part of a larger group. Had this attack truly been random, the masks wouldn't have been as important — Bird could have mentioned that it was a face she didn't recognize, or one hidden by a hood.

It seems that the writers are hinting that Bird didn't give us the full story about her attack, or, more likely, that she doesn't know the full story. Whatever awful thing happened to Bird, I doubt it's an isolated incident. This may just be another piece of the puzzle that will tell us what happened the day Carter disappeared.