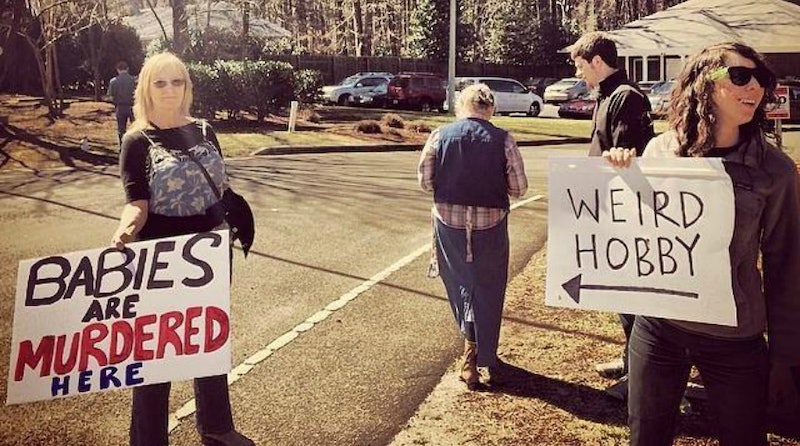 Pro-life advocates protesting outside women’s health clinics are a common sight these days. At their least offensive, they hold up signs condemning both the clinics for the abortion services they offer and the women who go to them seeking care and assistance; at their worst, they resort to harassment, in-your-face screaming, and violence. That’s why it was so disheartening to hear that in June, the Supreme Court struck down a Massachusetts law that had been enacted in 2007 creating a buffer zone around the entrances to clinics. Another day, another measure of protection stripped away.

But husband-and-wife team Grayson and Tina Haver Currin have found what might just be the best possible way to counter-protest the pro-lifers. Every Saturday morning, they arrive at a clinic near their hometown of Raleigh, North Carolina, with signs in hand, just like the original protesters. But while the pro-life signs read things like “BABIES ARE MURDERED HERE,” the Haver Currins’ signs… don’t. Instead, they look like this:

Grayson and Tina are both creative types — Grayson writes for Pitchfork and serves as music editor at Indy Week, while Tina is a copywriter and creative strategist — so of course they would harness their creative abilities instead of resorting to other means. They call it their "Saturday Chores," and they’ve been chronicling their efforts on Tumblr.

The project had humble beginnings; indeed, as Tina wrote on the Saturday Chores Tumblr, “It happened on a bit of a whim,” with the first sign making its appearance on March 8, 2014. Tina explained:

“There’s no big box hardware store very close to where we live, so Grayson and I were driving toward a suburb of Raleigh called Cary, which runs over with strip malls. I had gotten a gift card to Home Depot for my birthday, and we decided to get supplies for a garden box. We passed the clinic on the way.

“Grayson and I both grew up not too far away, and we’ve seen the clinic in question hundreds of times. But for some reason, on this morning in particular, the protesters got under our skin a little more than normal. Grayson suggested that we make a sign that said ‘Weird Hobby’ and point at one of the protesters. We tried to buy poster board at Home Depot, but they don’t carry it. As we were leaving, I ripped a vinyl sale sign off of a display and took a Sharpie to it. We posted the results to Instagram and Facebook, and people flipped.”

They’ve been at it ever since. And the best part? It’s working. Grayson told the Daily Dot, “Already they’ve taken to putting their signs down when we show up, which we consider an important if brief victory.” This Saturday, the couple is planning on showing up early with friends, taking over the curb so “they’ll have to squeeze into our ranks, as we normally do with theirs.” At some point, they’re also going to make a sign with pi written out to 100 digits.

Grayson notes that although there’s a lot of humor in what he and Tina do, there’s more to it than just giggles. “While it’s true that we’re mocking people, we consider the chief value of what we’re doing the solidarity that we demonstrate for the individuals or families that need to use the clinic’s services for whatever reasons they may have,” he said to the Daily Dot. “Generally, upon arrival, they only encounter hate. We want to offer a rejoinder, however slight. And we also hope to show passersby on the busy thoroughfare that the far religious right need not be the only ones with a voice; those with progressive views have one, too, and we should use it.”

More like this
How To Fight For Reproductive Rights, Based On How Much Time You Have
By Courtney Young
34 Quotes That'll Inspire You On Juneteenth & Beyond
By Syeda Khaula Saad and Siena Gagliano
16 Novels That Paint A Realistic Portrait Of Abortion
By K.W. Colyard
The Families Of Grenfell Tower Are Still Waiting For Justice, Five Years On
By Bustle UK
Get Even More From Bustle — Sign Up For The Newsletter