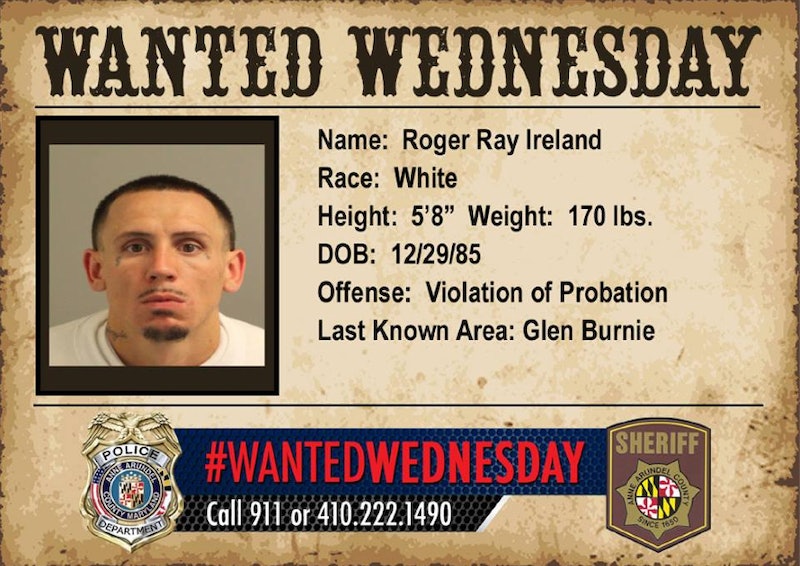 Oh, pride. It'll get you every time. Especially when it's being flaunted on a social media platform. Especially when you're a man running away from the police, and that particular social media platform happens to be the police's own. On Wednesday, Roger Ray Ireland got a bit carried away with his gangsta-mad skills, deciding to taunt the police officers, who were looking for Ireland, on Facebook. He bragged that he would never be caught — sadly, he was. Pretty much immediately, in fact.

On Wednesday, the Anne Arundel County Police posted a picture of Roger Ray Ireland on their Facebook page. He had violated his probation, and so he became part of their intense-looking "Wanted Wednesday" campaign. This involves posting a mugshot of the culprit, along with Wild West style writing and a series of facts about the person: name, race, height, offense, etc. (In case you're wondering, Roger Ireland is 5"8, 170 pounds, and at that point, he'd last been seen in Glen Burnie.)

Shortly after it was published, Ireland's Wanted Wednesday picture was shared over a hundred times. Multiple people began using the comment section, some recognizing the man in the mugshot, others choosing to tag others who might — including people who happened to be Ireland's family members. Which, you know, annoyed Ireland, him being on the run an' all. "Yo all yall people tagging my hole family bout my [business] stay ... outta [my business]," Ireland wrote on the police Facebook page.

Another commenter replied confusedly: "Wait what?? Isn't that him right above my comment??"

It didn't end there, though. Ireland also decided to taunt the police on his own mugshot, saying: "Y'all will never catch me." Only, they did. (Quickly. Clearly, that whole hiding-in-plain-sight thing just doesn't work in the social media age.)

In fact, just a day later, the detectives were able to figure out the wanted man's location, thanks to some tips they got from the public. They found him at a traffic stop in South Baltimore and took him into custody. “Social Media is a great tool for law enforcement and we appreciate our Social Media Sleuths,” Police Chief Kevin Davis said in a release.

Amid increasing stories of police brutality — that range from deeply upsetting to downright fatal — there's something reassuring in knowing that sometimes it's just a matter of finding an apparent idiot and putting him in handcuffs.

More like this
Michigan’s Governor Is “Going To Fight Like Hell” To Protect Abortion Access
By Andrea Zelinski
The Best Memes & Tweets From The 2022 Met Gala
By Olivia Rose Ferreiro
8 TikTok Pasta Recipes To Try Out At Home
By Emma Garza
On TikTok, Miley Cyrus’ “Malibu” Is The Soundtrack Of Growth
By Courtney Young
Get Even More From Bustle — Sign Up For The Newsletter