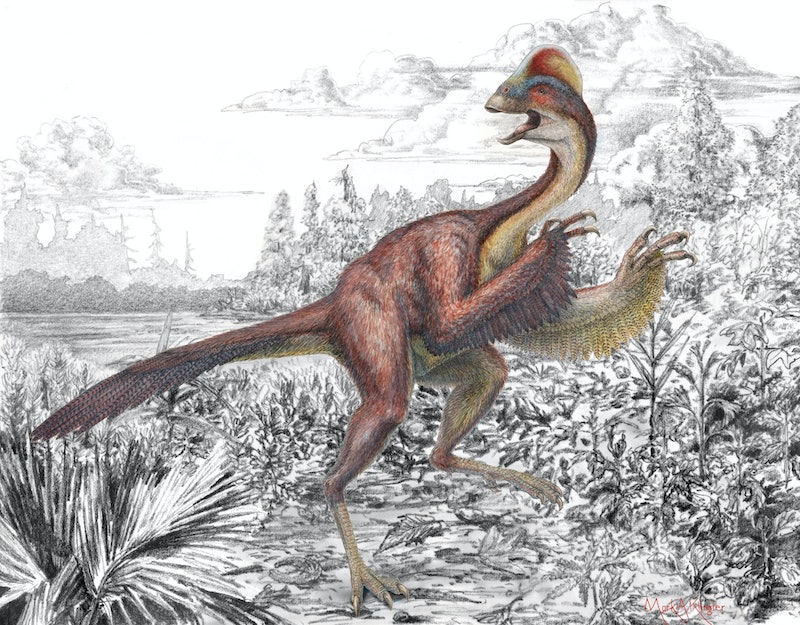 Prepare to have your mind blown, and your childhood turned upside-down: It's possible that all dinosaurs had feathers. I repeat: All dinosaurs may have been covered in feathers. Entirely covered. Like giant pigeons. Humongous, terrifying, carnivorous pigeons that clomped around the earth millions and millions of years ago, all feathery. I think I may need to lie down.

OK, I'll back up a little: On Thursday, scientists at the Royal Belgian Institute of Natural Sciences in Belgium published a potentially life-changing paper in Science magazine. (Well, life-changing for those of us who grew up on The Land Before Time and are averse to change in general.) This paper detailed the discovery of a newly identified dinosaur's fossilized feathers — and suggested that feathers were probably a much more common attribute on dinosaurs than previously thought.

Until now, scientists — along with the rest of the Jurassic Park-watching world — thought that only avian dinosaurs, the great-great-grandfathers of modern birds (or, as I like to call them, flying poop-missiles), had feathers. The newly discovered genus and species of plant-eating dinosaur cuts the legs off of this theory. It's called Kulindadromeus zabaikalicus, and it's wild, because it had both feathers and scales — but didn't fly.

“It’s impossible that they flew,” said lead study author Pascal Godefroit. “They were bipedal and had long legs with very, very short arms. Here, for the first time, we have found featherlike structures in a dinosaur [that] is far from the lineage leading to birds."

Incredibly, the scientists didn't just find one type of feather preserved on the dinosaur fossils; they found a variety. Some were shorter and less complex, more like bristles, others were downy — these, the researchers said, were likely decorative. The discovery made the scientists deduce that potentially a whole range of dinosaurs had feathers, and that they probably used them for everything from attracting mates to keeping warm.

Now, the search is on to find more fossils, with more feathers."We found [feathered fossils] in one locality in Siberia, and we will look around now to see if we can find more," Godefroit said, but warned: “We don’t know when new feathered dinosaurs will be discovered."

As the researcher points out, "the conditions for preserving feathers are really exceptional," so the task is a difficult one — but without it, how will we ever know if all of our favorite Land Before Time characters should be entirely redrawn? What if more types of our prehistoric friends — other than theropods and ornithischians — also had feathers? Are we really to live a life in which we never know whether to imagine Steven Spielberg sitting beside a murdered feathery triceratops or not?

Images: Giphy, The Land Before Time