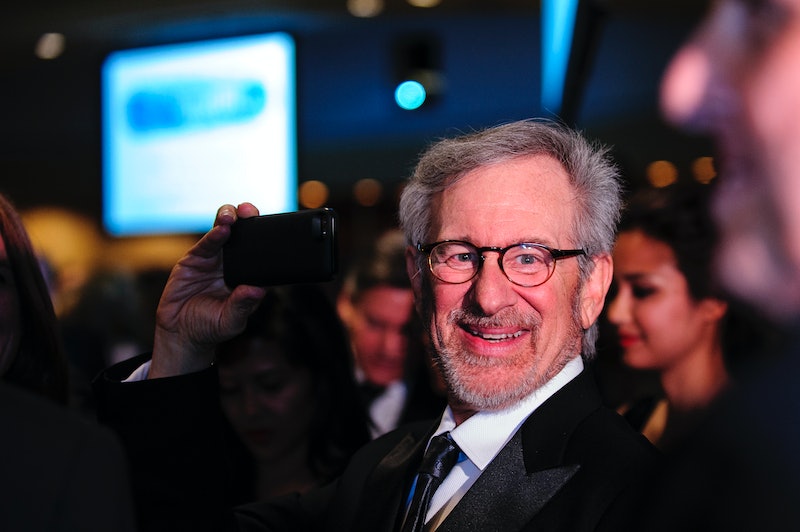 I don't know if you knew this (and you probably didn't because the mainstream media likes to keep this kind of stuff from us), but Steven Spielberg killed a triceratops and then he posed next to it smiling like it was totally fine. What a monster! This is really terrible stuff, you guys. I'm pretty sure triceratops are on the endangered species list. What is he going to do next? Fish for megalodons? We already know that those are being hurt every day by big tuna. He's appalling. I don't think we should watch his movies anymore.

The way news of Spielberg's clear hunting addiction and animal cruelty was brought to my attention was through a kind Facebook user, Jay Branscomb, who decided to post the photo of Spielberg with his "prey" for the world to see. And it's a good thing he did! Otherwise we would never have known the director was an animal killer. I know he's made movies about dinosaurs before, so maybe we should have taken them as a hint to his murderous ways. Maybe if we'd been doing that all along, the woman who wrote the Facebook comment below wouldn't have been so surprised by what she saw.

I'd love to see these hunters be stopped... I think zoos are the best way to keep these innocent animals safe.. assholes like this piece of shit are going into these beautiful animals HOME and killing them..its [sic] no different than someone coming into your home and murdering you.

If Steven Spielmurder is going to go around killing triceratops, maybe we can figure out what's next by looking at his film history. It's absolutely riddled with animal cruelty and inhumane acts.

Remember what I said about fishing megalodons? Guess he was way ahead of us. And not only that, he posed inside of the poor creature's mouth. It's absolutely sick.

"Why did it have to be snakes?" is right! But I'm sure it's a question Spielberg has never asked himself. Well, maybe if he's out fishing for megalodons and someone brings him snakes for bait instead of tiny kittens.

In E.T., Spielberg made the animal actor who played the extraterrestrial sit in a closet for God knows how many takes while a scene was shot. He was clearly overheated surrounded by all those stuffed animals, and do we even know if he was a member of SAG? Disgusting.

The crocodile may have triumphed in the film, but in real life Spielberg is probably hunting for his latest pair of gator boots.

War Horse? More like, It's a War When I'm Out Fighting Against Horses with My Rifles. Amiright, Mr. Spielberg?

Someone start a petition now. We need to keep this man off our screens and far away from our animals.