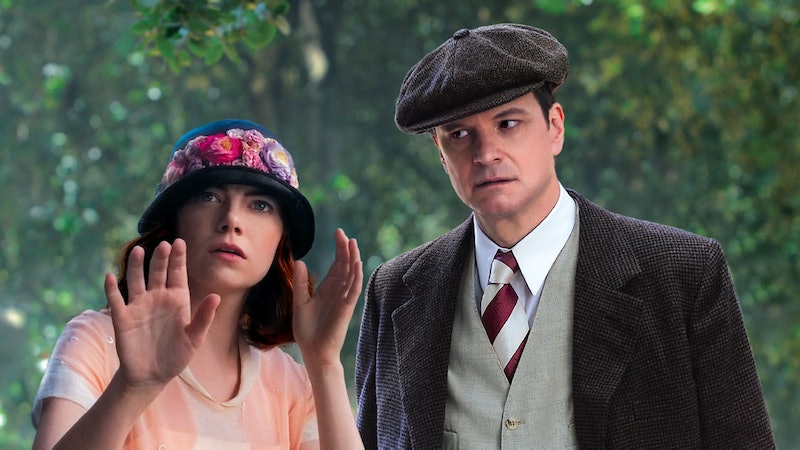 If you are going to see Magic in the Moonlight this weekend, it better be for one of two reasons: the charms of Emma Stone, or the adorableness of Colin Firth. The dialogue, the setting, the Woody Allen aspect — all of that isn't worth buying a ticket to this middling rom-com, but its stars, on the other hand, make for pretty good motivation to hit the theater. For fans of Firth, especially, Magic is a very good idea; practically every movie Stone does is charming and sweet, but her male co-star hasn't made a real rom-com in quite a long time. Long gone are the days of Bridget Jones and Love, Actually — with few exceptions, Firth as a serious actor has replaced the awkward, bumbly lead of the romantic movies we know and love.

Thankfully, those wanting to see all the different sides of Firth, rom-com lead included, have this year to do so; the actor has five movies out in 2014, all of which show him as a totally different guy — dashing charmer in one, action hero in another, and so on. The many faces of Colin Firth, as shown by this year's movies:

As Shown in: The Railway Man

In the blink-and-you-missed-it April release, Firth played a World War II veteran and former POW suffering from PTSD. His emotional distress, combined with his love for his wife (Nicole Kidman) and anger for the captors who held him hostage all those years ago, made for some compelling, if melodramatic, material.

Can Also Be Seen in: The King's Speech; A Single Man

As Shown in: Devil's Knot

In this biographical thriller (co-starring Reese Witherspoon — who knew?), Firth starred as a private detective investigating the case of the West Memphis Three.

Can Also Be Seen in: Trauma; Dorian Gray

The Adorably Awkward Romantic Interest, Typically With a Dead Wife

As Shown in: Magic in the Moonlight (although no dead wife)

True, Firth is less bumbling than usual in his latest rom-com, but even still, there's plenty of awkwardness to spare. As a magician set on unmasking a fraud psychic (Emma Stone), he's just sweetly dorky enough to make a bad movie tolerable.

Can Also Be Seen in: Love, Actually; Bridget Jones' Diary; Genova; Nanny McPhee; and so on.

As Shown in: Before I Go to Sleep

In the drama opening Sept. 12, Firth plays the possibly sinister husband of a woman (Nicole Kidman) who, after suffering a violent attack years earlier, struggles to remember the events of each day.

Can Also Be Seen in: Tinker Tailor Soldier Spy; Where the Truth Lies; The English Patient

As Shown in: Kingsman: The Secret Service

The highly anticipated adaptation of the comic book The Secret Service features Firth as a veteran secret agent who takes a new trainee under his wing.

Can Also Be Seen in: Nothing. This is all new territory for Firth, and we can't wait to see how it goes.

More like this
Colin Firth Revealed His Favourite Mr. Darcy (& No, It's Not Himself)
By Sophie McEvoy
Laura Dern Said “Cultural Awareness” Made Her Rethink This 'Jurassic Park' Fact
By Grace Wehniainen
Watch The Dramatic First Trailer For Netflix's Jennifer Lopez Documentary
By Alyssa Lapid
'Doctor Who’s New Star Is Already Huge On TikTok
By Maxine Harrison
Get Even More From Bustle — Sign Up For The Newsletter