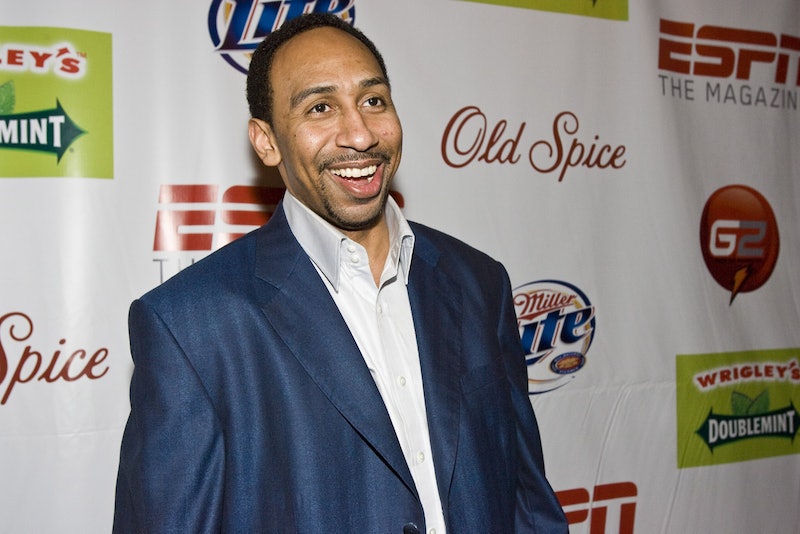 Earlier this week, The New York Times ran an article on how conservative women are urging their fellow political colleagues to stop talking about rape and sexual assault, lest they talk themselves into an insurmountable hole. That same idea should maybe apply to male sports commentators as well. On Friday, ESPN host Stephen A. Smith made some controversial domestic violence remarks while discussing the two-game suspension of NFL player Ray Rice for the alleged assault on his then-fiancée. Although Smith did try, repeatedly, to talk himself out of the hole, it was too much, too late.

For a quick refresher: Rice, a running back for the Baltimore Ravens, allegedly knocked his then-fiancée, now-wife Janay Palmer unconscious and dragged her body — by her hair — through an Atlantic City hotel casino. The act was captured on a casino surveillance camera. Rice was given a two-game suspension for the assault, a punishment that many critics thought was not enough.

Smith discussed Rice's suspension, which he admitted seemed much too light, on Friday's broadcast of ESPN's First Take. But the conversation soon veered into we-really-shouldn't-go-there territory when Smith suggested that women aren't doing enough to prevent domestic violence from happening to them.

"We keep talking about the guys," Smith said, reiterating that men have absolutely no right or excuse to put their hands on women. But let's also talk about how women are ultimately responsible for their partner's abuse:

Now, this is not something we haven't heard before. Whenever a story of domestic violence, rape or sexual assault goes viral, there's always the comment of well, the victim is at fault and must take some responsibility for triggering the violence. It's a dangerous line of thinking, one that unfortunately often influences people who are in abusive relationships: Many victims will tell you that they didn't leave earlier, or that they made excuses for their partner, because they were made to feel that they "deserved it." That they must have been at fault for some one else's actions.

What Smith seems to be missing is that abuse is often unpredictable. Many victims missed the so-called red flags for years — that is the power of domestic abuse.

But Smith's ESPN colleague Michelle Beadle seemed to understand. Outraged by his comments, Beadle fired back at Smith via Twitter. "I'm not aware that I can provoke my own beating," Beadle said, revealing that she has been in an abusive relationship in the past.

Beadle's stance is certainly valid and deserving of attention, especially her last tweet. When it comes to violence, the person at fault is the one who commits the act, and it's reprehensible to make excuses for the abuser.

However, some people seem to think Beadle stepped out of line. The responses she received from her tweets show just how prevalent the ideas "victim responsibility" and "victim privilege" and "women should expect a beating unless they do A, B and C" are.

Smith also thought Beadle was being way too harsh on him. He fired off a series of heated tweets on Friday, saying he couldn't understand how anyone took his words to mean women are responsible for violence and abuse against them. Smith later deleted those tweets and replace them with a single, longer message:

My series of tweets a short time ago is not an adequate way to capture my thoughts so I am using a single tweet via Twitlonger to more appropriately and effectively clarify my remarks from earlier today about the Ray Rice situation. I completely recognize the sensitivity of the issues and the confusion and disgust that my comments caused. First off, as I said earlier and I want to reiterate strongly, it is never OK to put your hands on a women. Ever. I understand why that important point was lost in my other comments, which did not come out as I intended. I want to state very clearly. I do NOT believe a woman provokes the horrible domestic abuses that are sadly such a major problem in our society. I wasn’t trying to say that or even imply it when I was discussing my own personal upbringing and the important role the women in my family have played in my life. I understand why my comments could be taken another way. I should have done a better job articulating my thoughts and I sincerely apologize.

Smith's apology seems sincere, but the fact he had to backpedal at all is frustrating. To say football has "a woman problem" is an understatement: As much as America loves football, domestic violence, rape and sexual assault run rampant among the sport's ranks from the high school to the professional levels. Sports fans, writers, analysts and athletes need to do better — and that starts with a message.

More like this
Amanda Gorman Shared A Powerful Message On Meghan Markle’s Penultimate Podcast
By Darshita Goyal
Claire Foy & Rooney Mara Revisit A Devastating Tale In 'Women Talking'
By Bustle UK
The David Beckham Qatar Controversy, Explained
By Sophie McEvoy
MOBO Awards Found Kanya King On The Woman Whose Grit & Determination Spur Her On
By Kanya King
Get Even More From Bustle — Sign Up For The Newsletter