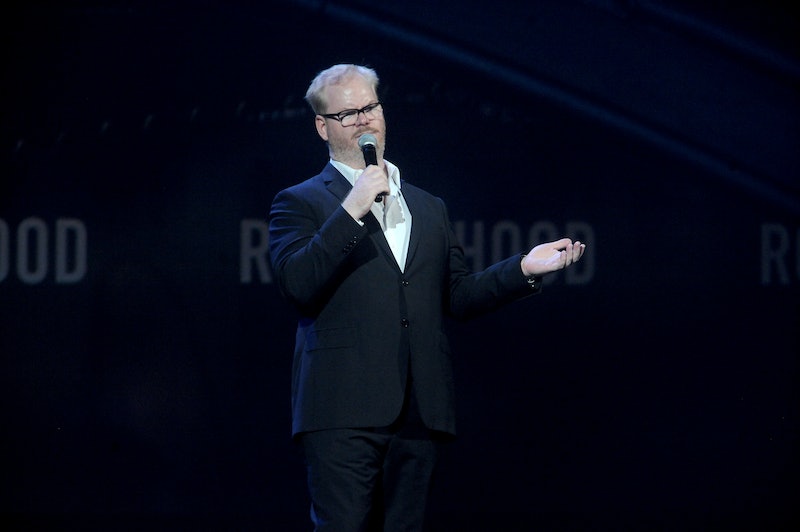 Although TV Land axed Kirstie on Tuesday afternoon, the network has quickly balanced its schedule out by adding Jim Gaffigan's self-titled The Gaffigan Show to its roster. According to TheWrap, the comedian is set to star in the single-camera, semi-autobiographical family comedy. The show will follow "one man's struggle in New York City to find a balance between fatherhood, stand-up comedy, and an insatiable appetite."

And just how many children will he be raising in his TV-family? Five — the same number of children he actually raises in his real-life. The series, which will also feature Ashley Williams (How I Met Your Mother) as his wife, Adam Goldberg (Fargo) as his best friend, and Michael Ian Black (This Is 40) as his wife's confidante, will air in 2015 on TV Land. And as an added bonus, each episode will re-air on Comedy Central a week after it first debuts.

So where is all of the material going to come from? Well, the self-deprecating and extremely pale Gaffigan co-wrote the pilot, so we're extremely hopeful that he'll be pulling material from his stand-up sets. Fingers crossed that these six bits will make their way into the show in some form or another:

1. He struggles with the judgement he gets from other people about him and his wife having five kids.

Best Line: "Strangers, for some reason, think I'm unaware that it's a lot of kids. 'Five Kids. That's a lot of kids.' 'Oh you think so? Thanks for the heads-up. Do you mind if I stab you in the head.?'"

2. They struggle to raise their kids.

Best Line: "Do you know what it's like to have a fourth? Just imagine you're drowning, and then someone hands you a baby."

3. He doesn't want to go to someone's wedding.

Best Line: "It is nice to be invited to a wedding, but you always look at that invitation like, "Ah, this is going to cost me. Oh good. It's out of town. Wouldn't want to use those vacation days for vacationing."

4. Their youngest child has to deal with a lot of shit.

5. Him and his wife argue over her changing her last name.

Best Line: "My wife changed her name. I know some women have a problem with that, but I wanted her to have my old girlfriend's name."

One time, Gaffigan's kids performed an opening number before one of his show's, and it was one of the most amazing things ever. Obviously they would win the talent show.