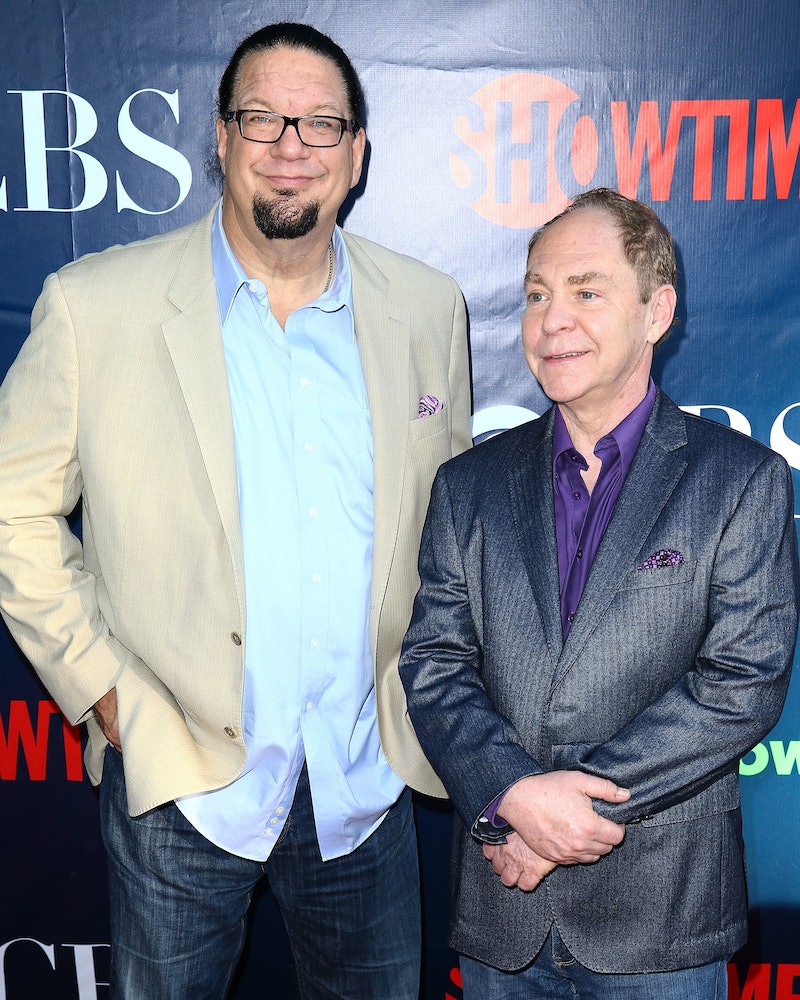 They almost had us fooled, but Penn and Teller's new show Fool Us is no newbie to television screens. While it may be hitting our shores for the very first time, the latest addition to the CW lineup is actually a British import. Originally airing in 2011, the program left English airwaves with only a single season under its belt. However, this whole recycled program business doesn't make the show any less good. For someone like me, who was a little bit of a magic nerd back in the day, this show is pretty exciting. Think of it like American Idol for magic, with a twist.

Magicians Penn and Teller watch other illusionists perform their tricks, and if they can guess how they did it, the magicians lose. If they can dupe the duo, they win the chance to open for Penn and Teller's Vegas show at the Rio Hotel and Casino. Penn and Teller see the routine just one time, and then must figure out how the performers pulled it off in real time in front of a live studio audience. It's the best parts of watching a reality talent show like The X-Factor combined with watching famous people play a kind of game, in the vein of Celebrity Game Night.

The CW website makes no claims as to whether this re-broadcast of Penn and Teller: Fool Us heralds in the start of an new all-American season of magical goodness. For now, they're airing the original nine episodes as hosted by British TV presenter Jonathan Ross, who is probably best known to American audiences for featuring Sandra Bullock's sweet rhyming skills on his chat show.

Regardless of how you feel about the idea of an import, the show itself has a lot going for it. Fans of entertainers Penn and Teller know they are lovers of both the history and the heritage of magic, as well as the art of debunking. Their Showtime show Bullshit! was in part inspired by Harry Houdini's skepticism and tendency to debunk supernatural claims, as explained in the very first scene of the show's premiere episode. While that show quite often veered toward the political, it's no great leap of faith to see why they might take a little lighthearted glee in unwrapping the logic behind some expertly executed magic tricks from new magicians.

The best part is that the veteran magic makers aren't cocky or narcissistic; they're generally pleased and delighted when they get duped by a talented performer. I can't imagine what it's like to be so good at illusions that you can usually see the strings, and then actually see something new that fills you with wonder.

If you're now antsy for a taste, I don't blame you. But if you want to avoid spoilers, Google may not be your friend. The show has got its share of fans across the pond, with some of the more awe-inspiring tricks and magic-makers having quite a bit of traction on reddit and Facebook, like comedian-magician Piff the Magic Dragon, who has almost 20,000 likes on the latter. The show still has to build up that following stateside, however. At press time, The CW's official Twitter feed for the show had less than 100 followers, but that'll probably change once the American broadcasr gets a little momentum.

The network is banking on revived summer magic shows capturing audience attention among a sea of the standard competition fare, pairing Fool Us alongside brand new episodes of Masters of Illusion, (a title I'm sure Gob approves of). Lest you think Illusion is all new, it too has been pulled from the dead. The show previously ran for three seasons on other networks and was then given a 13-episode order by The CW. So will this double dose of re-packaged illusions be a trick up the CW's summer lineup sleeve, or will it be a dud? Judging by Penn and Teller's past TV successes, it's safe to say we'll be ooh-ing and aah-ing over expertly carried out magic tricks all summer. But to really be a hit, Fool Us needs to feature "The Final Countdown" at least once.