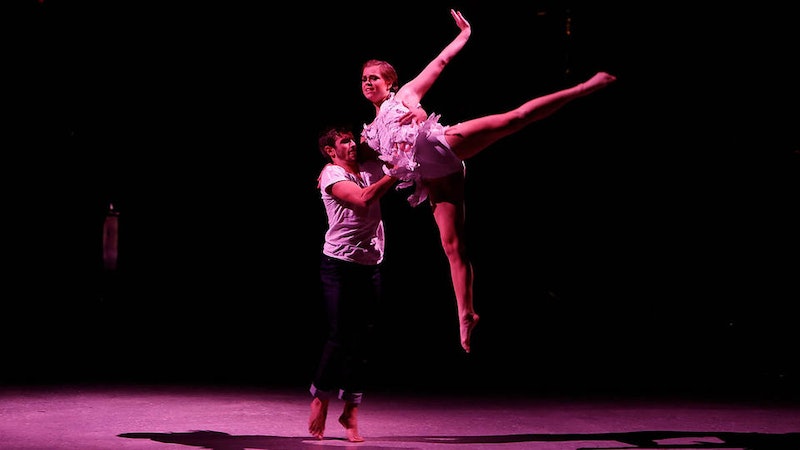 I'll be the first to admit that I'm not usually a big fan of the tapper contestants on So You Think You Can Dance, which is why Valerie Rockey is such a surprise this season. Tap wasn't really a represented contingent in early seasons, and once it was, the dancers generally weren't as versatile as the highly trained members of other genres.

But Season 10's Aaron proved that assumption is definitely not true. By Performance Week 1 of Season 11, this year's tappers gave a performance that made it easy to forget that in the past, tap dancers came in as underdogs. Each week, Valerie (who's one half of the tapping duo) proves that she's not one note, and that she packs a performance punch. I continue to look forward to next week's genre, and I'm pretty confident I can do that without worrying about her tenure on the show because this girl isn't going anywhere.

To the untrained eye and ear, advanced tapping is always pretty impressive, but the televised performances can fall flat compared to other routines with flowing movement and emotional connection. This season's debut tap number was an attention grabber from the first flap. Zack Everhart made a great partner for Valerie and the duo's performance quality was one of the best of the night, making their routine a surprising contender amongst the Top 20. Knowing they'd have to split up for Week 2 was a little heart wrenching.

But the show wasted no time in testing Valerie's versatility and had her performing a contemporary piece with new partner Ricky Ubeda, a contemporary dancer. As a partner, Ricky's strength can be an asset as can his technical talents, but pairing a non-contemporary dancer with him for a Travis Wall routine might be a recipe for intimidation. For someone on his level, it's not hard to outshine a partner. But against those odds, Valerie displayed her talents, held her own with him, and showed us what we can expect from her this season.

The next week, she was tested again with the beautiful but dreaded Viennese Waltz. She hit the stage looking like a princess with a twirly skirt every young girl dreams of, but despite the dream-like quality of the elements, the nature of the dance is slow, traditional and restrained. It often doesn't translate well for modern audiences at home. It can be the "kiss of death" early on, when voters don't feel strongly towards contestants yet. And while it probably won't be remembered as her most dynamic performance, Valerie danced it convincingly and beautifully enough to be safe the following week, an indicator of true staying power.

Finally, in Week 4, Valerie and Ricky were challenged yet again with the season's first Bollywood number. That's when I became convinced that this dancer really has what it takes to go all the way on So You Think You Can Dance.

With its intricate hand motions, extremely fast pace, and unfamiliarity to general American audiences, Bollywood is another tricky one for both dancers and viewers. Still, I could not tear my eyes from Valerie the entire performance. She danced Bollywood like a pro, and her energy and execution were among the best of the night. Though this number was performed first that night, it was memorable after all ten performances were finished. Even the most technically trained contestants have tripped over their Bollywood assignments, and Valerie carried it off as if it were an easy tap number.

Though Valerie has been hit with challenges early in the season, her technique and performance skills have kept her out of the bottom three so far. Obviously, she clicks easily with viewers — even the short into packages before each performance leave me wanting more. With Ricky by her side, some emotional latin ballroom or can't-miss-a-beat hip hop is all she needs to keep her streak going. And lucky for her, most of the "challenge" performances are already under her belt.