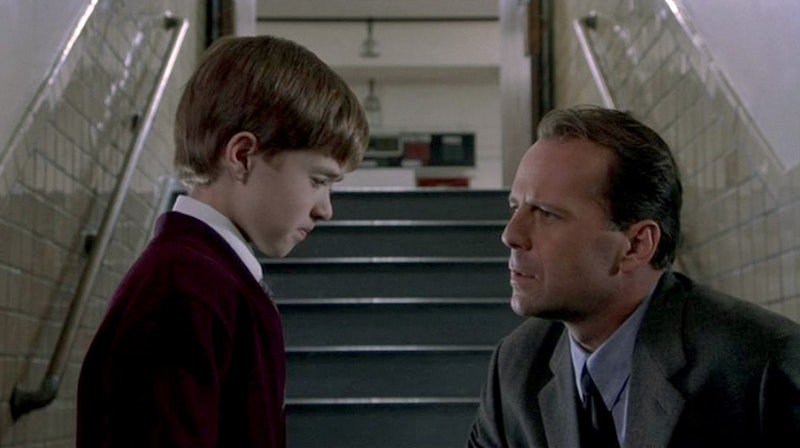 Wow, time flies. The Sixth Sense turns 15 this year, which means that we've lived through a decade and a half of "I see dead people" jokes and less-than-stellar derivative horror flicks. The paranormal thriller was more than just a scary movie — it boasted strong actors, an intriguing concept (what happens to a child when his world is flooded with beings only he can see?) and, of course, a jaw-dropping ending that shocked audiences everywhere.

After psychiatrist Malcolm (Bruce Willis) teaches Cole (Haley Joel Osment) how to help the ghosts who haunt him, Malcolm realizes that he, too, is one of the ghosts that Cole sees — Malcolm was dead the entire time. The twist ending was certainly effective — few could claim that they saw the truth before the big reveal — but while most people can agree that the ending was shocking, there is one thing about it that has spurred a great deal of debate amongst fans of the film. Did Cole know that Malcolm was dead?

When I first saw the film, I assumed that the answer was no. After all, if Cole did know that Malcolm was a ghost, wouldn't he be as afraid of Malcolm as he was with the other ghosts he encountered? Upon further reflection of the work — and another viewing of the film — I've noticed that there is considerable evidence that suggests the opposite. Cole could have known that Malcolm was dead the entire time — in fact, it's probably more likely that he did. Though writer/director Shyamalan has yet to clarify Cole's knowledge of Malcolm's death, viewers can infer after watching the film that Cole was aware of more than he let on. Here's why.

When we first meet Malcolm, we assume that Cole's mother has hired him, as most of what we see in the film is from Malcolm's unreliable perspective. When Malcolm is revealed to have died a year earlier, we realize this never actually happened. Cole would have known that his mother never hired Malcolm, and that she never saw Malcolm at all.

Ghosts Appear As They Did During Their Death

Every ghost we see in the film appeared to Cole as they did during their death. Malcolm most likely appeared to Cole with blood on his clothes from the gunshot wound that killed him. Malcolm, a ghost, only saw what he wanted to see. Most of the story is shown through Malcolm's eyes, which is why we see Malcolm as he wishes to be seen.

Cole Never Tells The Ghosts That They Are Dead

Most people assume that Cole would tell Malcolm that Malcolm was dead, which is why they believe Cole is unaware of Malcolm's situation. However, there's no precedent for that — as far as we see, Cole does not inform the ghosts he meets that they are dead, including the ghosts he befriends. There is a chance that Cole doesn't do this for a reason. Cole may have told a ghost that he or she was dead, which caused them to lash out violently.

Cole Knows The Rules Of His Sixth Sense

In Cole's infamous "I see dead people" speech, he tells Malcolm what he already knows about ghosts. He says that they don't know that they are dead, don't recognize one another, and only see what they want to see. Basically, Cole is describing Malcolm — and he knows it.

Cole Can Differentiate Between the Living and the Dead

Sometimes what we don't see on film is just as important as what we do. In The Sixth Sense, we see that Cole recognizes the dead immediately. There is never a scene where Cole is unaware that someone he is speaking to is a ghost, or assumes that a living person is actually dead. We can only assume, then, that Cole has the same level of recognition with Malcolm — for whatever reason, Cole just knows Malcolm is a ghost.

Shyamalan may never confirm what Cole knows, but when you peel back the layers of The Sixth Sense, it appears that only Malcolm — and the audience — were in the dark about his tragic fate.

More like this
These 25 International Horror Movies On Netflix Prove Fear Is A Universal Language
By Bustle Editors
A New Scooby-Doo Movie Confirmed Velma Is Gay & Twitter Is Pumped
By Radhika Menon
Everything You Need To Know About ‘Black Panther: Wakanda Forever’
By Bustle Editors
Alan Rickman's Diary Reveals Why He Considered Leaving 'Harry Potter'
By Darshita Goyal
Get Even More From Bustle — Sign Up For The Newsletter