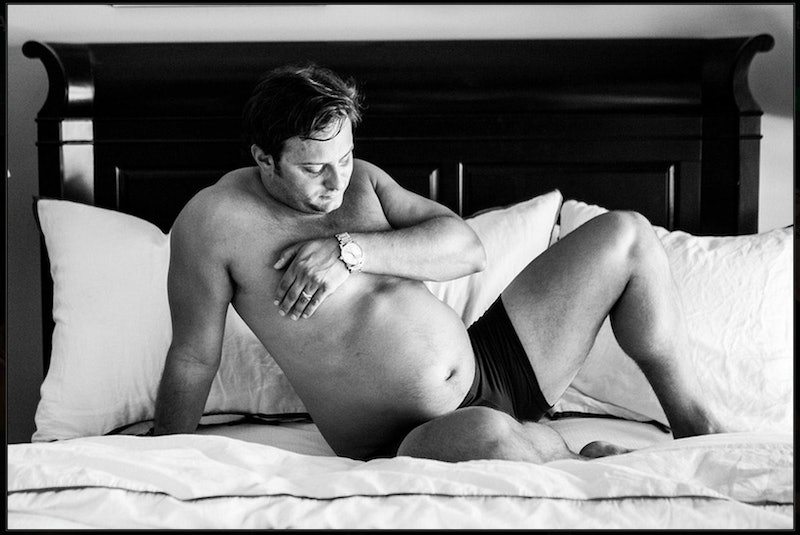 A question for the guys out there: If you and your partner were expecting a baby and she decided she didn’t want to sit for pregnancy photos, what would you do? Would you just say, “OK, that’s cool — why waste the money on a professional photographer?” Would you suggest you have your own photo shoot courtesy of Instagram, just so you had some documentation of the occasion? Or would you offer to sit for the maternity photos yourself instead? Because that’s what this guy did, and the resulting images are something I shall henceforth refer to as “manternity photos.”

Redditor DruishPrincess69 — who, as far as I can tell, is not actually a princess — posted a thread to the content-sharing website yesterday titled, “My wife didn’t want to take maternity pictures, so I hired a photographer and took her place.” In the thread was an Imgur album of beautiful shot maternity photos… featuring DruishPrincess69 himself and his beer gut instead of his wife and her baby bump. Maybe I’d better just let the pics speak for themselves. Here, have a look-see:

I’ll admit that I don’t quite understand why we feel the need to hire professional photographers to document all our major life events these days. This, though? This is so bizarre that it kind of circles right back around to genius. I think, at least — I don't know. Honestly, I have many thoughts about it, many of which conflict with each other in really confusing ways. On the one hand, it seems a little like it’s perpetuating stereotypes of women in general and pregnant women in particular; but on the other, it’s hilarious enough that it might be poking fun at the stereotypes, rather than perpetuating them. Also, does DruishPrincess69 remind anyone else a tiny bit of Jason Segel?

For the curious, here’s what he usually looks like:

One thing’s for sure: This images are going to haunt my dreams, whether I want them to or not. Anyone else?