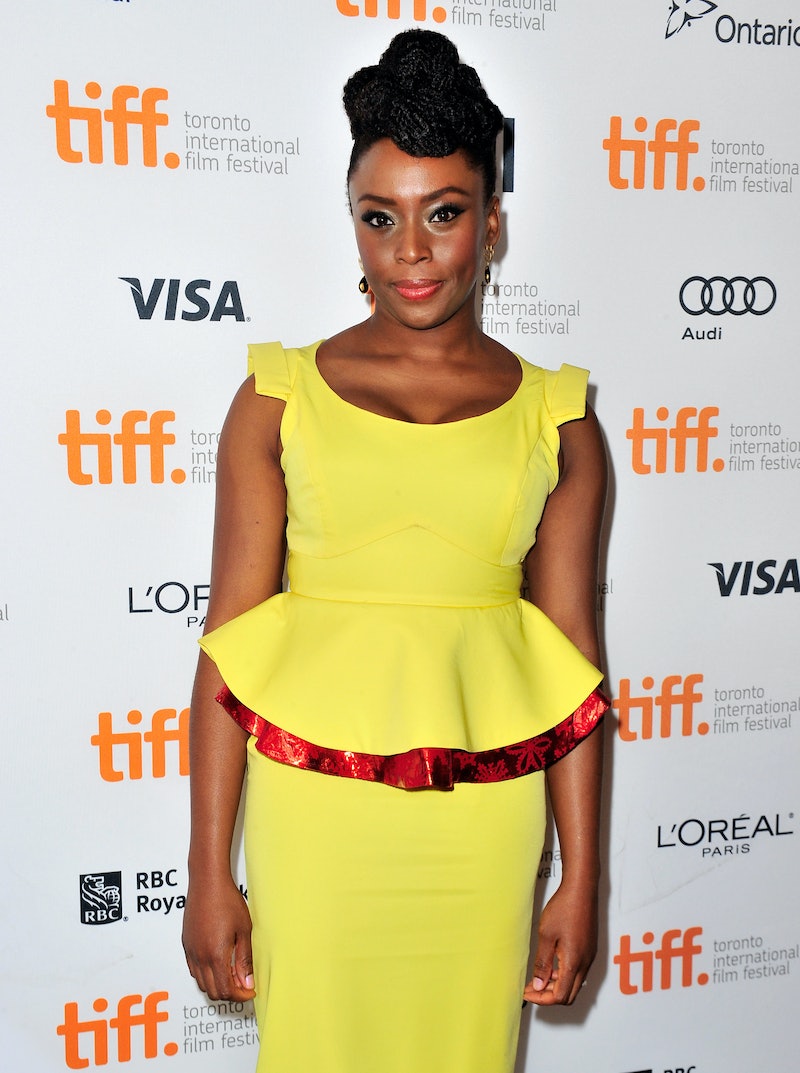 When my editor asked me to review Chimamanda Ngozi Adichie's new essay, We Should All Be Feminists (Vintage Books), I said yes and then dove under the covers to worry. I hate to admit it, but I'm one of those woefully under-read feminists. I'll wave the flag, sure, but I doubt I could skillfully argue my way between first-, second-, and third-wave feminist beliefs, and I certainly haven't read the cornerstones of the movement: The Second Sex, The Feminine Mystique, Audre Lorde. So how could I write intelligently about Adichie's essay if I couldn't situate it within the movement? Is it possible to write about feminism without knowing everything there is to know about feminism?

Oh, the lies we tell ourselves when we're afraid. Just as the classic definition of "feminism" is wonderfully straightforward — "the theory of the political, economic, and social equality of the sexes" — Adichie's essay is probably the most accessible exploration of feminism you'll read anywhere on the Internet. It's brief and accessible, clear-eyed and level-headed, empathetic, and determined. It's not so much about theory and history as it is about the ways in which our world is still failing half of its citizens, and it ends with this simple call to action: We should all do better. All of us. Even the gals. But also the men, obviously. In fact, this essay may be the ideal introduction to feminism for everyone, whether or not they've read the bigger books, and whether or not they call themselves a feminist at all.

Like me, Adichie hasn't read much of the feminist canon. In this essay — an adaptation of her December 2012 TEDxEuston talk that was sampled so famously in Beyoncé's "Flawless" — Adichie writes: "Much of my early reading was decidedly unfeminist: I must have read every single Mills & Boon romance published before I was sixteen. And each time I try to read those books called 'classic feminist texts,' I get bored, and I struggle to finish them." In contrast, We Should All Be Feminists is easy to finish, partially because it's so short (a huge plus when you're trying to reach stubborn people) and partially because it's full of fascinating, sad, hilarious personal anecdotes. Reading the essay is like listening to your cool friend wax poetic and political after a dinner party, with her glass of port in one hand and her shoes off. The essay isn't here to trick you, or make you feel terrible. It gives away its "point" in the title — we should all be feminists — and the rest of the piece follows suit, illustrating the still-so-insidious inequalities between men and women in concrete examples rather than theoretical ones.

Adichie opens the essay with an anecdote about the first time she was called a feminist. She was 14, arguing with a childhood friend, and when he called her a feminist, he wasn't complimenting her. This negative connotation has followed Adichie into her adult life: She's a feminist, so she hates men; she's a feminist, so she doesn't wear deodorant. "The word feminist is so heavy with baggage, negative baggage," she writes, and the very fact that a Women Against Feminist movement exists should show us just how much negative baggage the idea of "feminism" has collected over the decades.

Many of the essay's anecdotes take place in Nigeria, where Adichie was born. There, she is not allowed to go into certain clubs without a man accompanying her. She is questioned when she walks into a hotel alone, because a woman alone in a hotel is assumed to be a sex worker. When she tips a valet, he looks straight past her and thanks her male friend, because he assumes that all of her money must have, ultimately, come from a man.

"The word feminist is so heavy with baggage, negative baggage."

Adichie skillfully unpacks our assumptions about marriage and how the categories of marriage/singledom affect women so much more than they affect men. Even today, the world clings to this idea that gaining and preserving a marriage is more important for a woman (who, if unmarried after a certain age, is seen as a freak) than it is for a man (who, if unmarried after a certain age, "has not quite come around to making his pick"). She writes about how men are expected to give up trifling, hyper-masculine things for the piece of a marriage — strip clubs, cigars — while women are expected to give up "a job, a career goal, a dream." She writes of her unmarried friend, who wears a wedding ring to conferences so that she'll be respected.

The piece gets most compelling when Adichie muses about the ways in which boys and girls are raised differently. This, as she points out, is the root of the problem, because in order to achieve an equal world, we must raise our children to create an equal world. This is how we raise our girls: we shame them ("cover yourself"), we police them, we teach them "to shrink themselves," we turn them into women "who have turned pretense into an art form." And boys? "We do a great disservice to boys in how we raise them," says Adichie. "We stifle the humanity of boys. We define masculinity in a very narrow way. Masculinity is a hard, small cage, and we put boys inside this cage."

"Masculinity is a hard, small cage, and we put boys inside this cage."

Adichie is angry. She admits this freely. But her feminism does not stop with anger, and neither does the essay. "In addition to being angry, I am also hopeful, because I believe deeply in the ability of human beings to remake themselves for the better," she writes. This is what is so wonderful about We Should All Be Feminists, and what makes it such a perfect introductory text for those who haven't been exposed to feminism and those who distrust it. She's angry, yes, but Adichie consistently chooses empathy over anger. With skill and infinite care, Adichie paints feminism as an issue that all of humanity should be concerned with, not just something that husband-less women yell about and brutish men ignore.

(We should all buy We Should All Be Feminists for 99 cents through Vintage Books.)