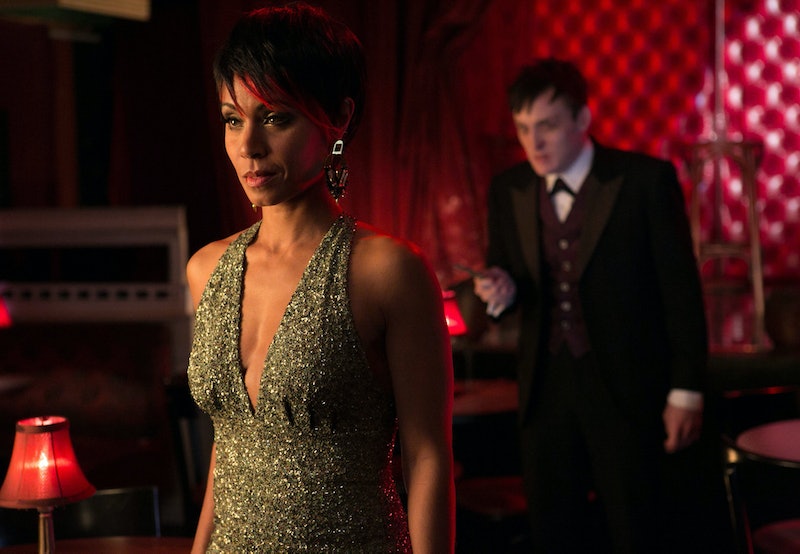 In September, Fox will premiere Gotham, a series about Gotham City before Batman and it'll be filled with characters with a certain locked-in destiny, since we know where they end up in DC comics and movies. We know that Bruce Wayne, for example, will eventually become the great Dark Knight, and that James Gordon will eventually be police commissioner. Even the villains are pretty recognizable, with Selina Kyle (aka Catwoman) and Oswold Cobblepot (the Penguin) in the mix. But one remains a mystery: Who the heck is Jada Pinkett Smith's character, Fish Mooney, and do comics fans already know everything there is to know about her?

Fear not, casual Batman fans. If you know your Christopher Nolan better than your Bob Kane, you're not the only one in the dark about who Mooney. The character of Fish Mooney was invented just for Gotham. Without the benefit of the comics to give us a leg-up, here's what's known so far about Mooney: Fox describes her as "a sadistic gangster boss and nightclub owner" who has "almost extra-sensory abilities to read people like an open book."

And, of course, she's not one to mess with. "Fish is, she's a very edgy woman with quite a temper," Pinkett Smith told press at the Television Critics Association Summer Tour. "I did kind of a mix of Griselda Blanco with Norma Desmond, Griselda Blanco being like one of the most notorious female gangsters… And then Norma Desmond from Sunset Blvd."

From what little we know about her so far, she'll fit just fine in the rogues gallery of Batman villains. Here's why.

Batman gets the most credit for dealing with crazier personalities like the Riddler, but good ol' organized crime has always been one of Gotham City's toughest adversaries. From the Penguin — who seems to start off in Mooney's gang in Gotham — to the soured financier who becomes the numbers-running Great White Shark to the old-fashioned mobster Carmine Falcone, Gotham has a deep bench to its criminal underground. Entertainment Weekly even floats a theory that Mooney becomes the Great White Shark (but that's purely speculation).

She Wields a Baseball Bat

Pinkett Smith was spotted around Comic-Con this week carrying an aluminum baseball bat to get into character. "This is her regulator," she says, according to HitFix. "I brought her best friend with her, and you're gonna see what kind of influence the regulator has on some of our most iconic villains in Gotham." Mooney comes from a long line of Gotham City heavies who use the bat as a weapon, including The Made of Wood Killer (called one of "20 Laughably Terrible Batman Villains" by io9) or Polka Dot Man. OK, those both are pretty weak, but maybe she can up the baseball-bat game in Gotham.

If there's one thing we don't want from our Batman villains, it's subtlety. The Joker wasn't known for his tasteful attire, you know. Thankfully, Jada Pinkett Smith looks like she delivers. "She's utterly absurd," Katharine Trendacosta writes in io9 after a screening of the pilot at Comic-Con. "But she is having the time of her life as Fish Mooney, and it's really entertaining." It better be, since Pinkett Smith has a lot to live up to if she wants to make it into the pantheon of Gotham City villains.