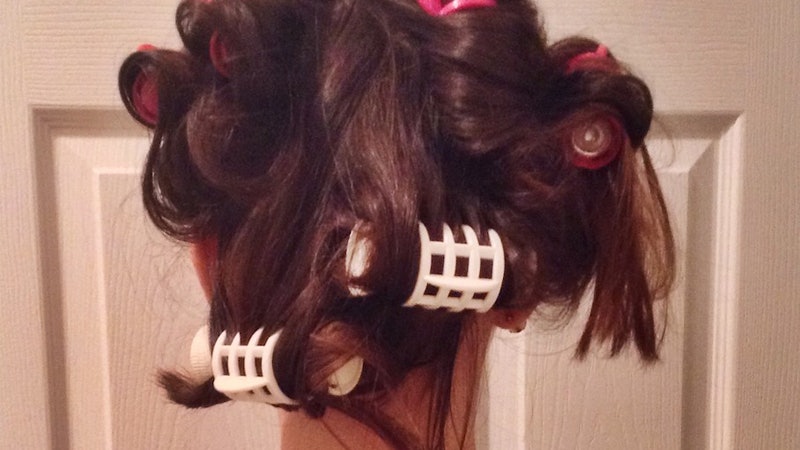 Let me just start this post by saying a ton of really great things about my boyfriend. He's tall, handsome, attentive, hilarious, a great puppy dad, and a genuinely nice person. He's also a man of many talents, whether that includes grilling the perfect steak (or practically any other amazing grilled recipe), fixing anything I ever ask him to, or absolutely ruling at his job.

But, ladies (and this is where you should stop reading, dear, sweet boyfriend), he is no Chris Pratt. Why am I comparing my truly awesome boyfriend to the super-stylish Anna Faris's husband? Not to see who's having the better year, of course (because we all know 2014 is the year of Chris Pratt). Rather, after watching the Guardians of the Galaxy star French braid an intern's hair in the middle of an Entertainment Tonight interview, I started to wonder whether my gifted boyfriend could do the same. The answer: Sadly, he cannot. And how do I know that, you may ask? Because I let him fix my hair for five days straight and trust me, that was long enough to judge his hairstyling skills (or lack thereof).

Here's how it all went down.

I started him off simply, because as skilled as he is in other areas of his life, I wasn't quite sure I could trust my other half with my precious strands. But after verbally guiding him through the proper way to use a straightener, I held my breath and let him get to work. And — wait for it — it wasn't so awful.

Sure, it ended up being a little frizzier and wavier than I would typically leave it (particularly in the back), but I'll just blame that on the fact that I let my strands air dry on this particular day. Surprising even myself, I was left thinking, "I would actually leave the house like this."

This is a style I wear pretty often, as I can't stand to leave my hair in my face but don't always love to throw it in a ponytail. My boyfriend got the hang of the style pretty quickly, and it looked great from the back and the side.

From the front, however, it could pass as a half-hearted attempt at pulling off a Snooki pouf for Halloween. When I asked him if he wanted to smooth it over (hint hint), he literally licked the palm of his hand and used it to slick my hair back. I guess that's how simple it really is for men...

This is where things started to get fun and, yes, definitely more challenging. I'm all for a chic chignon or a perfectly wrapped ballet bun (I'm a classic girl at heart, after all), but the hot mess of a lopsided bun that my boyfriend put together just didn't work for me.

He insisted, nevertheless, that the precariously balanced style looked amazing. Whether that was to flatter me or to pat himself on the back for what he truly thought was a job well done, I may never know.

By the fourth day, the two of us were really starting to get into a rhythm, with me not fully trusting his abilities and taste level, but nevertheless counting on him to produce a hairstyle that was halfway decent. Perhaps that's why I thought about letting him curl my hair the way I typically do it: using my straightener. And that thought lasted maybe half a second, or until the terrifying image of him burning my hair off popped into my mind. Thanks, but no thanks. Instead, we went the safer, more retro route and rolled my hair in a trusty set of hot rollers.

You guys, I can't even make this stuff up. I don't know if my boyfriend simply couldn't comprehend the idea of curling hair, or if the curlers burned his fingers so many times he just gave up. Whatever the reason, I ended up looking like I just rolled out of bed after a three-day bender.

This was a major relapse, and right at the moment when I thought he was showing a little bit of promise.

I like to call this the Chris Pratt test. Not quite confident he had the patience, willpower, or time to both learn how to French braid and actually pull it off on a real-life head of hair, I let him off a little easy by requesting a simple braid.

And though he doesn't really have a lot to show for it — it ended up looking like a dressed-up ponytail for the most part — even I can admit that the style didn't turn out half bad. I'd like to think it was my expert guidance, of course, but he may argue that after five days of learning the trade, he's finally becoming a hair pro.

Listen, he's not Chris Pratt level or anything, but he's passable in a pinch should I ever find myself desperate. And really, isn't that all a girl can ask for?