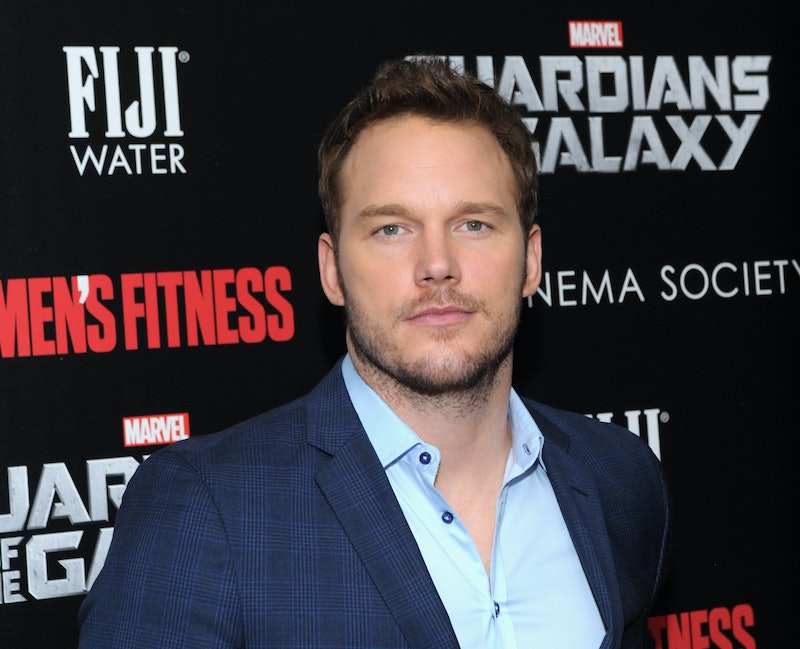 Chris Pratt is a very funny guy. In fact, one time on the set of Parks and Rec, he let out his inner flasher and decided to show Amy Poehler his penis. Wait! He's not supposed to joke about that! We're not supposed to think it's funny. The Parks and Rec and Guardians of The Galaxy star recounted this tale when he stopped by Late Night with Seth Meyers on Wednesday night.

This all transpired during Season 2, when the cast was shooting a scene in which Leslie Knope meets a naked Andy when he shows up to greet Ann in the flesh. You know the deal: nudity wins the heart. Pratt had been wearing skin colored underwear — as is often expected of actors who are implying nudity — but he claims he wasn't getting quite the reaction out of Poehler that he wanted to get.

So, in the final take, he went, as he calls it, "trou-down" with his "snake out." Apparently, this worked. It got just the reaction he wanted out of Poehler, and Poehler's reaction was so extreme, that the Parks and Rec crew ended up using the expression she made when she saw Pratt's real penis, as opposed to, uh, his fake one. So the next time you re-watch Season 2 of Parks and Rec, you can think, "aaaaannd that's how someone looks when she sees Chris Pratt's junk."

You can watch Pratt relive the tale in the video below.

More like this
Chris Hemsworth Joked That Baring His Butt In ‘Thor: Love And Thunder’ Was A “Dream”
By Brad Witter
'The Undeclared War' Took Inspiration From This Gavin & Stacey Location
By Maxine Harrison
'The Undeclared War' Is A Must-Watch For 'Black Mirror' Fans
By Maxine Harrison
What Is the Net Worth Of Each 'Stranger Things' Season 4 Cast Member?
By Hugh McIntyre
Get Even More From Bustle — Sign Up For The Newsletter