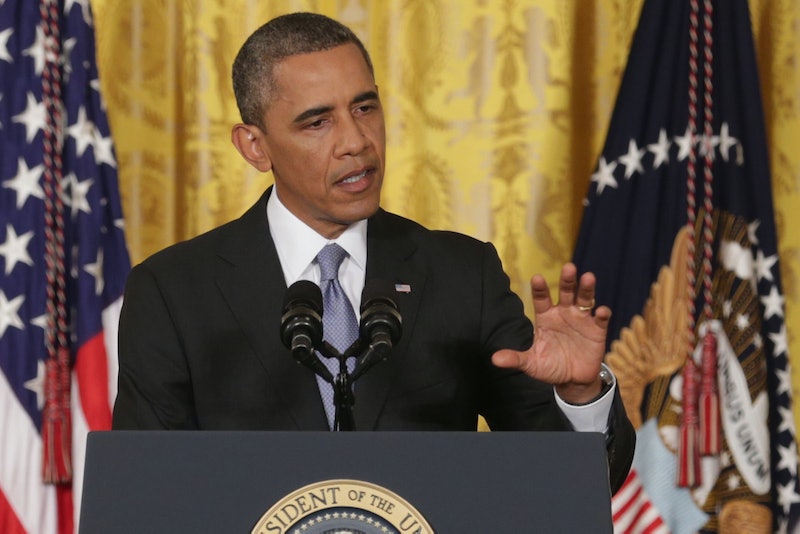 President Obama announced Friday afternoon that the National Security Agency's surveillance program will, as of now, be subject to a series of checks and balances to ensure "transparency."

At the press conference, he reminded that America faces ever-present threats, citing this week's embassy shutdowns in response to an alleged al-Qaeda plan of attack, and said that the technology available to security officials are imperative and necessary tools to defeat them. Obama went on to praise the existence of debate regarding surveillance — "given the history of abuse by governments" — and promised to implement a series of checks and balances in light of concern.

This concern is, in a nutshell, criticism that American security agents are breaching the privacy of citizens nationwide. Since leaks emerged that any online form of communication — texts, calls, emails, WhatsApp, you name it — can and some cases is being intercepted, critics have drawn attention to their Fourth Amendment rights not to be searched unlawfully. (Oh, and sales of George Orwell's novel at the surveillance state, 1984, have seen a hell of a jump.)

The administration, Obama went on, would deal with this in four ways: by reviewing and reforming the Patriot Act; to give FISC (the court that reviews intelligence activities) a kind of defense attorney to provide the other side of the story; by making as much of the surveillance measures as possible transparent, including setting up a website with details of the programs; and by forming an outside agency to independently review the programs in their entirety. The president continued:

I’m also mindful of how these issues are viewed overseas because American leadership around the world depends upon the example of American democracy and American openness, because what makes us different from other countries is not simply our ability to secure our nation; it’s the way we do it, with open debate and democratic process.

While taking questions, Obama addressed the issue of his canceled summit with Russian president Vladimir Putin. Snowdon was not the sole reason behind the decision, he noted:

It is probably appropriate for us to take a pause, reassess where it is that Russia’s going, what our core interests are, and calibrate the relationship so that we’re doing things that are good for the United States and, hopefully, good for Russia as well but recognizing that there are just going to be some differences, and we’re not going to be able to completely disguise them. And that’s OK. Keep in mind that although I’m not attending the summit, I’ll still be going to St. Petersburg because Russia’s hosting the G-20.

He mentioned his strong disagreement with Russia's anti-gay policies, especially in regard to its hosting of the Olympics.

I do not think it's appropriate to boycott the Olympics. Nobody’s more offended than me by some of the anti-gay and lesbian legislation that you’ve been seeing in Russia... And one of the things I’m really looking forward to is maybe some gay and lesbian athletes bringing home the gold or silver or bronze, which I think would go a long way in rejecting the kind of attitudes that we’re seeing there. And if Russia doesn’t have gay or lesbian athletes, then that would probably make their team weaker.

Finally, weirdly, Obama tried out a analogy: if he said he did the dishes, for example, Michelle would "have a right" to go and inspect them. Just to be sure.

"Of course, in the White House I don't do the dishes that much," he added.

You can watch part of the conference here: