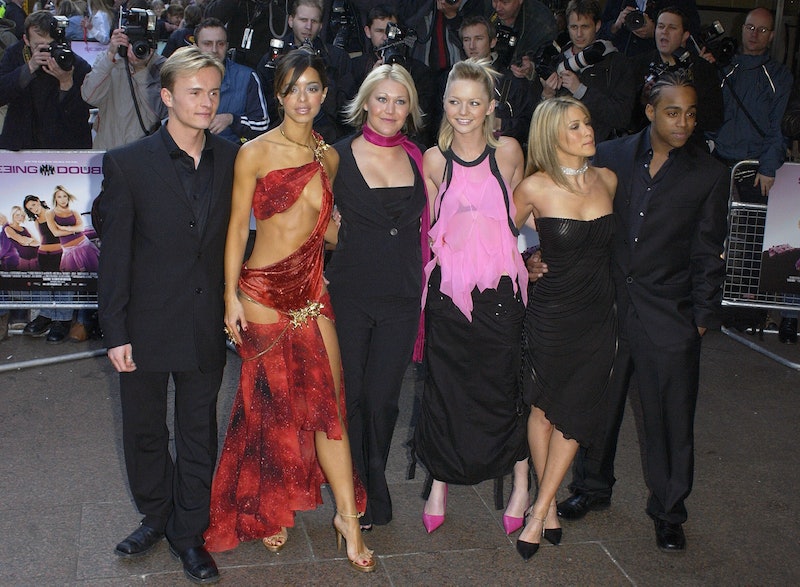 Remember the days when ABC Family was called Fox Family? Well, back then there was a TV show that rivals my current Pretty Little Liars obsession. Yes, it was that good. Or at least my 10-year-old self thought so. S Club 7 in Miami was a scripted series about a real life pop group, and I don't know why I loved it so much, but I did. I guess because there ain't no party like an S Club party, am I right? In case the name wasn't self-explanatory enough, this British band was comprised of seven members: Tina Barrett, Paul Cattermole, Rachel Stevens, Jo O'Meara, Hannah Spearritt, Bradley McIntosh, and Jon Lee.

Since I was mildly obsessed with them during my adolescence (and I doubt I'm the only one), I decided to do some digging and find out what they're up to now. Are they still acting on TV shows? Do they still wear matching outfits and hang around dancing in deserts? I needed to know. Upon searching Twitter, it turns out S Club 7 still hangs out, which is basically the best news ever.

To jog your memory (or add to the nostalgia), feel free to play this song as you continue reading!

The band first formed in 1998. Bradley McIntosh recently shared this on Instagram from their first photoshoot. It is perfection. P.S. Cool bucket hat!

Their show premiered in 1999 and this was really their prime time. There were even TV specials that aired along with the show.

In 2000, "Never Had A Dream Come True" came out. It is pretty much the perfect slow song. I dare you to listen and not sing along.

Sadly, they finally split in 2003. A year before, in 2002, Paul Cattermole reportedly left the group to join a rock band.

They've all been taking part in various solo projects ever since they broke up.

In 2012, Tina Barrett released a song called "Fire." Of course, her fellow S-Clubbers helped promote the song on their Twitter accounts!

Remember how I said Paul Cattermole left for a rock band? Well he's currently in one called Skua. He's the lead vocalist.

In addition to acting (including the movie Seed of Chucky ), Hannah Spearritt is a yoga ambassador.

Jo O'Meara considers herself a full-time mommy, according to her Twitter bio. She also has a super-cute cat.

Bradley McIntosh still makes music, too! He posts songs to SoundCloud under the name Citi Boy.

Rachel Stevens is a model and an ambassador for a charity called WaterAid. She also has two daughters.

Besides their solo endeavors, they've been hanging out as a group recently! Seriously, the band recently got together and really I wish I was there.

Here's photographic evidence of them hanging out:

All of this spurred rumors that they're reuniting. (!!!) All I can say is... Don't stop, never give up / Hold your head high and reach the top / Let the world see what you have got / Bring it all back to you!