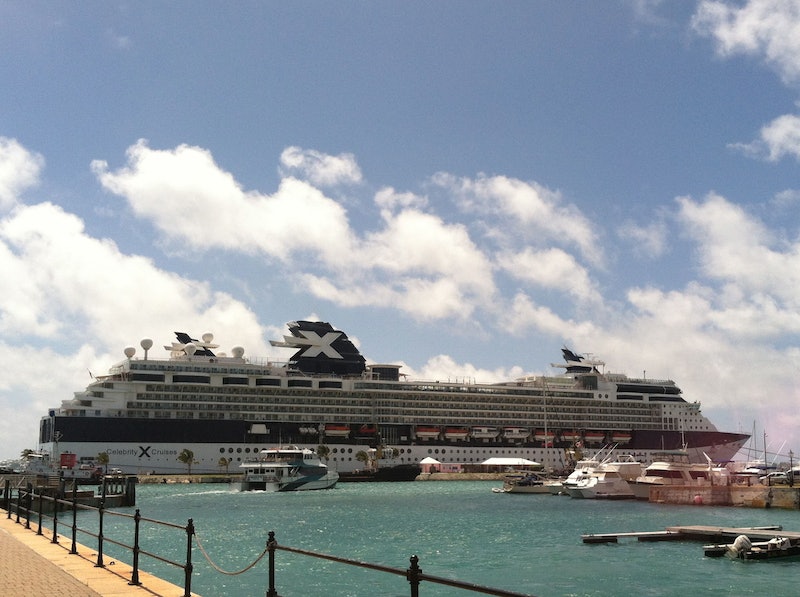 "You're going to New York?!" said my grandma, as I hung up the phone after checking on my flight information. "Um, sort of," I replied. More accurately, I was going to New York for approximately 20 minutes, after which I'd board the Celebrity Summit, a 2158-occupancy cruise ship, and head to, well, Bermuda.

Bermuda. On a cruise ship. I've never been on a cruise ship before — in fact, I've never been in the middle of the ocean, period — and seeing as I have a terror of open water and a major Titanic complex, I had no idea what to pack other than 10 LIFE JACKETS. I opted for certain basics (hot pink swimsuit, tiny white shorts, sundresses) and certain nautical-themed wares (a shirt with ships on it). Spoiler alert: I took photos of every single outfit I changed into, because the ship was covered in mirrors. At the last minute, I threw on a shark tooth necklace that I bought in Panama — because that's what pirates wear when they're feeling fancy — and hopped aboard.

DAY ONE: CHAMPAGNE AND HERBIE

After lunch and some seasick-quelling sips of rosé, I was shown to my room. Due to some holy mix-up from a greater power than I, I'd been upgraded at the last minute to the spa-themed room (don't even ask me how much my Scottish Presbyterian guilt kicked in when my dad expressed disbelief that I had my own balcony). Am I crazy, or is the greatest part of any vacation the moment when you get to your room, fling down your bags, and collapse on the bed?

The ship set sail to great fanfare, and soon enough it was nightfall, and time to change into something a little nicer. Here's the thing about cruise ship nights: People dress up. And they dress up right. And you wouldn't necessarily know this if, say, you had an inbred fear of the ocean and had never been on a cruise before. Let's just say I didn't pack a pair of heels.

But pants will do when dresses are not to be had, and flowy blue shirts make up for a lot of ills.

It is a truth universally acknowledged that all men involved in commandeering a boat are extremely attractive. Half of it is the uniform (did somebody say EPAULETTE NATION?) and half of it is the fact that they're doing something very important with an extremely large vessel. That morning, I toured the bridge and the engine room, and made a GREAT impression by asking the captain what sorts of nautical "slang" he used. (Answer: none. Ships don't use slang.)

Since my life was obviously really hard that day, I slunk on over to the ship's Canyon Ranch SpaClub and experienced something called, blissfully enough, the Dream Ritual. When my masseuse asked me if I had any problems, I said something like, "I sit at a computer all day writing, so I basically don't have a functional spine anymore." She pointed to her moonflower-scented oil with a knowing smile. An hour later, I was a new writer.

My outfit on Day Two was ship-themed, which I personally found very appropriate. I think it's important to show the world that you're really invested in whatever you're currently experiencing. Put me on a cruise? I WILL WEAR NAUTICAL PRINTS.

Tiny white cutoffs were fine during the daytime, but that night was formal night, and formal night on a cruise ship is no joke. Women wear ball gowns. Men wear tuxedos. Apparently it's a throwback to the days when cruising was an ultra-formal activity, and I think it's a sweet ritual — but unfortunately, I didn't have anything truly fancy. I opted instead for a beloved ocean-blue maxi dress from Anthropologie that has seen me through enough socialization to kill a grown man.

After two nights of staying up until 3 AM, I looked like at least one of my parents was a zombie. But I had a facial scheduled for that morning, so I managed to get out of bed.

Slater Zorn top, Target shorts. Not to boast, but my pattern-mixing game was on point that day.

I packed a thick daytime moisturizer, but my face was suffering — as much as I love travel, I think my skin may officially hate it. My facialist even commented on the dryness of my skin before I started my appointment. I am a tortoise.

I'm usually a member of the don't-overexfoliate-dry-skin school of thought, but the facialist took a different approach, and I have to say, it worked: She used both a mild exfoliating mask and a very gentle chemical peel before applying multiple layers of moisture in mask-, serum-, and lotion form. This is so cliché, but it's also the mark of a good facial: My skin was glowing afterward.

It was also shiny.

Night fell leisurely, as it does on the ocean, and I drank some more champagne, because when onboard, right?

Apparently we pulled into Bermuda at 7 AM that morning, but I didn't feel a thing, because I was busy sleeping like the dead. (Last-call champagne is never a good idea, friends.) Unfortunately, an oncoming storm meant there was little to do, but on the bright side, I saw a side of Bermuda that was decidedly un-cliché: gray skies, lashing palm trees, gorgeously turbulent water. I was glad to be docked (see: terrified of ocean), if slightly bummed that I wouldn't get to go to the beach, but I went onshore anyway to get lunch.

I include this photo as a cautionary tale, because this was a rough morning for me. A few life lessons I've since learned from this photo: When your hair is disgusting because you stayed up till 4 AM the night before, PUT IT UP IN A BUN BECAUSE YOU DON'T ACTUALLY HAVE "BEACH WAVES." In addition, I'm not really feeling my decision to pair heavy, dark Birkenstocks with white shorts. It looks off-balance. But what am I saying? Thoughts like these are incredibly self-centered, because really, the point of this whole excursion was not to complain about fashion, but to see this:

See the rain in the distance? It began to pour minutes after this photo was taken, so I rushed back to the ship to prepare for dinner. Formal night was child's play compared to this night, because this was the night I received the highest possible honor a cruise ship can convey — other than getting to steer the thing, I suppose — DINNER WITH THE CAPTAIN. Obviously, this called for my very fanciest wares. Fortunately, I snuck an LBD into my suitcase amongst all those nautical prints.

The theme of the next day was Getting Home in One Piece, which for me, meant frantically eating a baguette on my way off of the ship.

You know that famous David Foster Wallace essay on cruise ship culture? That's what I had expected from the trip, and in many ways, Wallace was right. Cruise ship culture is bizarre — it's a tiny floating island full of you, 2,157 other people, and everything you need to survive. It's not at all like a hotel, where you wander through the anonymous hallways and out into the real world to do your Real Person Vacation Things. It's more like summer camp. At first, it's overwhelming and full of strangers, but after three days at sea, you feel a distinct affection for them all (even the odd ones). You run into people in the elevators and dance with the same gaggle of adolescents and elderly folks every night. Nobody has functional Internet, and that's great, because it means you're all looking at the ocean.

Late one night, as I was leaning over my balcony and looking at the incredible darkness of the ocean, I realized that the man on the balcony beside me was doing the exact same thing. We said hello and went to bed. I saw him the next day, and the next. It was that grownup-camp solidarity that I missed when I was back on solid ground. So I called home to tell my grandma about it.

More like this
The 8 Best Walking Shoes For Metatarsalgia, According To A Podiatrist
By Lauren Moison
Here Are All 703 Outfits Rachel Wore On Friends
By Kat George
This Scandi Beauty Brand Is Basically Hygge In A Bottle
By Justine Knight
20 Glamorous Holiday Party Outfits That Give *Opulence*
By Dominique Norman
Get Even More From Bustle — Sign Up For The Newsletter