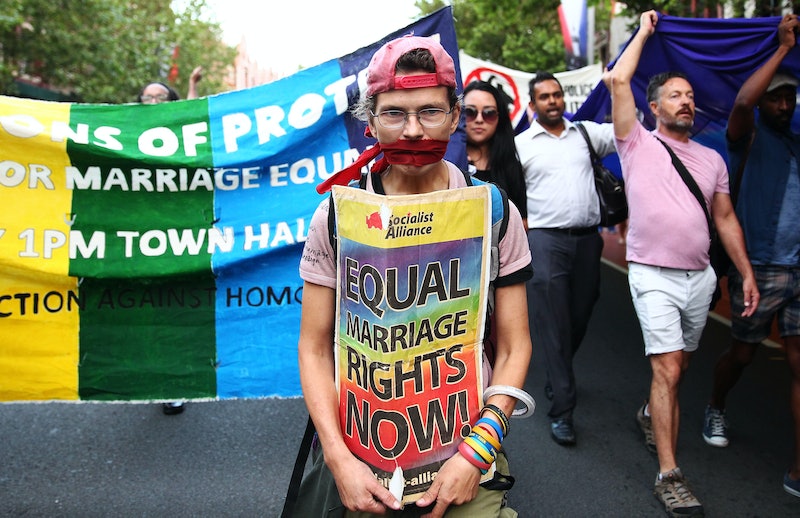 Hundreds of people gathered in London Saturday to protest against Russia’s “gay propaganda” law, calling for a boycott of the 2014 Winter Olympics in Russia, just as the athletic championships begin.

Demonstrators — including actor and author Stephen Fry — gathered opposite the Prime Minister's residence on Downing Street, and as near as they could to the Russian Embassy's building. The protesters carried rainbow flags and banners with slogans like "Love Russia. Hate Homophobia," demanding changes in the homophobic Russian policy.

Fry, who penned an open letter Wednesday to Prime Minister David Cameron and the International Olympic Committee calling for the 2014 Games to relocate, said the protests were really about “allowing gay people of Russia to grow up free and proud and happy and with the genuine sense of importance they deserve.”

"I’m under no illusions that we’re going to make the Games go to Vancouver or Lake Placid or anywhere else — they will go ahead. But I think it’s up to the gay community now, and our straight friends, to devise a signal that all the athletes can use, every time they perform, every time they win a medal, to show that they are thinking of the oppressed LGBT community."

Cameron responded to Fry’s letter via Twitter Saturday, agreeing that the homophobic legislation was "concerning," but adding that an Olympics boycott wasn't the answer.

A human rights campaigner who was at the demonstrations said that Saturday's protest was just the beginning of a long fight for change.

"Right now we’ve got a Boycott Russian Vodka campaign it’s just the first stage. The next stage is to boycott the companies that are backing the Winter Olympics such a McDonalds, Coca Cola and Visa," he said. "Then we have to escalate the campaign further to Russian companies that are investing in Russia and supporting the Putin regime. Economic power is the key to victory."

The anti-gay legislation bans the dissemination of information aimed at minors which may cause a "distorted understanding" that gay and heterosexual relations are "socially equivalent" — effectively making it near to impossible to voice support for gay rights.