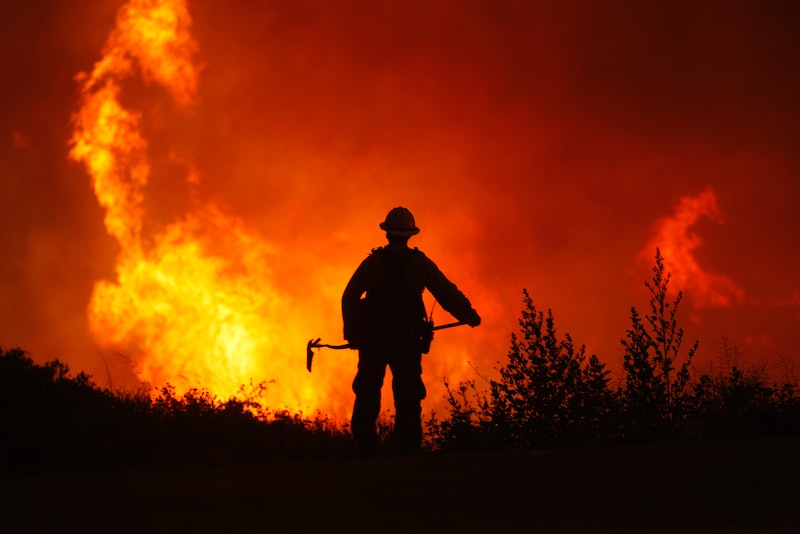 Gov. Jerry Brown declared a state of emergency in California on Saturday night as several wildfires raged across the state. And you may be surprised where the fires are. Although many of the season's fires have occurred in Southern California, known for being dry and, well, hot, the current fires are burning in the central and northern parts of the state, as well as in Oregon and even Washington. In total, there are six major wildfires and tens of smaller ones burning in California and the Pacific Northwest, so you might want to reconsider those plans for a summer vacation out west.

Most of the fires are thought to have been sparked by dry lightning, which strikes without any rain to go with it. In other words, it's probably one of the worst things that can happen in dry, drought-beset, fire-prone areas. A spokesman for the California Department of Forestry and Fire Protection said that the size and scope of the fires is something usually not seen until September. (Fire season is typically June through October.) But considering the first fire of the year was in January — which marked the beginnings of seven wildfires total — all rules were thrown out the window long ago. This year, it's always fire season.

The specific fire that prompted Brown to declare the state of emergency is happening on the California-Oregon border and has prompted evacuations. The fire has thus far destroyed three homes and threatened about 270 more structures. During the day Saturday, it had burned 33 square miles of land. By midnight, that number had climbed to 50. You aren't alone in thinking that's unusually scary, even for a wildfire: The Oregon Department of Forestry thinks so, too. In a statement on its website, the agency confirmed, "Fire behavior for the Oregon Gulch Fire was extreme with rapid rates of spread. ... Erratic, gusty winds on the Oregon Gulch Fire caused the fire to move east."

California was able to get federal funds on Saturday to cover 75 percent of the cost of fighting that particular fire. But Brown acknowledged that this is a battle that California can't fight alone. In the declaration of emergency, Brown announced that "the circumstances of these wildfires ... are likely to be beyond the control of the services, personnel, equipment and facilities of any single local government and require the combined forces of a mutual aid region or regions to combat."

Adding Smokey Bear to your team might also be a good idea, Mr. Governor.