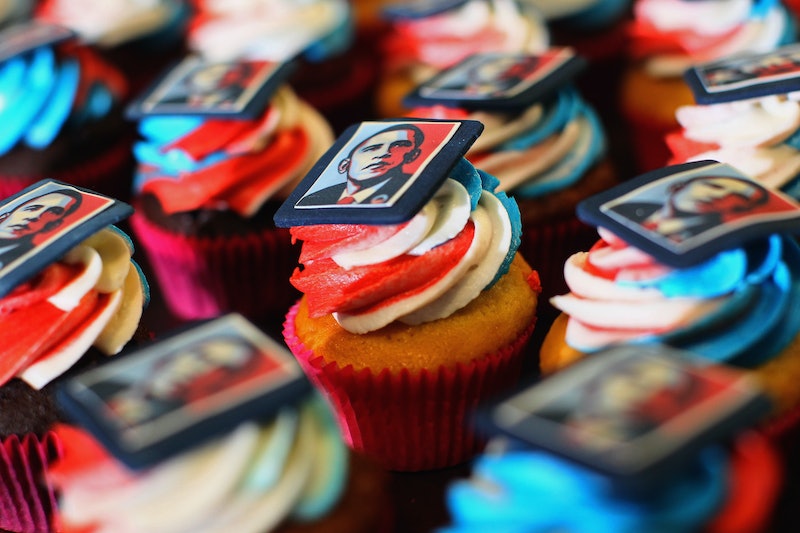 How would you spend your birthday after a week full of broken cease-fires, fractured relations with Vladimir Putin and a pending federal lawsuit? For the president, there's only one way: on the golf course. Yup, Monday marks President Barack Obama's 53rd birthday, and he celebrated by playing a round of golf with his high school buddies. After the week he's had, it's safe to say that Obama deserves it.

According to The Associated Press, Obama was joined on the golf course at Andrews Air Force Base on Saturday by friends Mike Ramos, Bobby Titcomb and Greg Orme, who he's known since high school in Hawaii. The golf outing is an annual tradition for him and his high school pals. The foursome teed off against eight other golfers, and guess whose team reportedly won — Obama's.

But Obama's 53rd birthday celebration didn't end there. Following the winning golf game, the president and his entourage boarded Marine One and jetted off to Camp David in the Catoctin Mountains. Obama also took his personal trainer along with him. Michelle and his two daughters, Sasha and Malia, did not come along for the ride, for reasons that remain unknown. Perhaps it's just a guys weekend out, or maybe the women of the White House have something else in store.

As for plans on his actual birthday, Obama is laying low on Monday. He has no public events planned, save for a meeting with Treasury Secretary Jacob Lew. It's probably for the best for the embattled president: Last week, the House of Representatives voted to approve a federal lawsuit against Obama over his delaying of an Affordable Care Act provision. After being hit with a lawsuit of that size, I think Obama deserved to take a small break from Washington.

But Obama's birthday weekend didn't get off to a smooth start. On Friday, the president had to handle a tension-filled press conference that addressed everything from the ongoing conflict in the Gaza Strip to the House lawsuit. After being bombarded with questions about the Ebola epidemic in Africa and the CIA, Obama asked: "I thought that you guys were going to ask me how I was going to spend my birthday. What happened to the happy birthday thing?"

No journalist did ask about his birthday, as they seemed more interested in his admission of "we tortured some folks" than how it feels to turn 53. But at the end Friday's press conference one journalist did wish the president "happy birthday," to his delight:

That’s what I was talking about — somebody finally wished me happy birthday — although it isn’t until Monday, you’re right.

So, help Obama out and wish him a "happy birthday." After all, he's probably not getting too many birthday cards from Congress this year.

More like this
Are John Legend & Kanye West Still Friends? The Singer’s Latest Update Is Candid
By Brad Witter
Rishi Sunak's Wife Is Worth More Than The Queen
By El Hunt
7 Things We Learned From Rebekah Vardy's First Post-WAGatha Christie Interview
By Sam Ramsden
What We Know About Where Caroline Watt Is Now
By Catharina Cheung
Get Even More From Bustle — Sign Up For The Newsletter