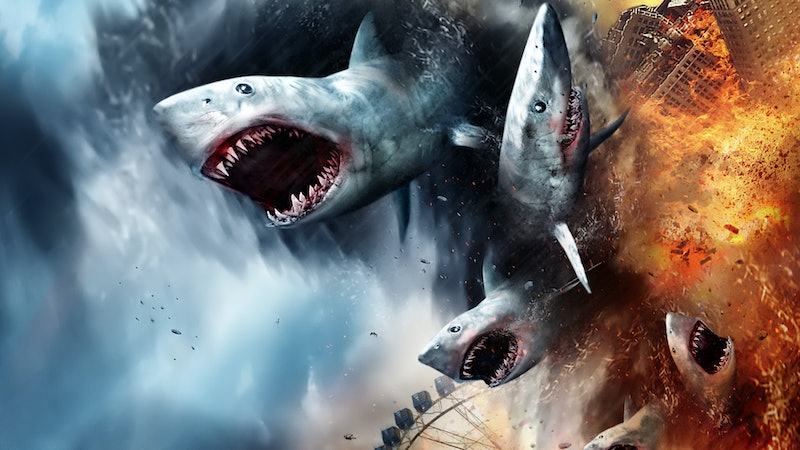 Sharknado 2 will be the most popular TV movie of 2014. Although it may never win an Emmy or Golden Globe nomination, Sharknado 2 has captured the minds, hearts and tweets of summer TV-watchers with its ability to "make viewers groan both in pain and pleasure, depending almost entirely on their cheese tolerance." The television premiere on Syfy garnered 3.9 million viewers and over 1 billion social media impressions. For comparison, the first Sharknado garnered over 600,000 tweets, while the much-debated True Detective finale raked in around 160,000 related tweets. Although it's clear that Sharknado has won social media, it also seems to be winning at the box office: the theatrical release of the first installment has been followed up by the one-night-only release of Sharknado 2: The Second One. The finned funnel clouds will form in a theater near you on August 21, and it's expected to sell out far in advance.

Now that Syfy has created this internet-monster of a TV movie, we need to step back and consider what it has achieved. Between Sharknado, Sharknado 2 and the promised Sharknado 3 , there will most likely be over 10 sold-out "film events" nationwide, billions of social media impressions, over millions of tweets, and a viewership bump that the network hasn't seen since Battlestar Gallactica was in its prime. Even though Sharknado comes from a long tradition of made-for-TV movies, it will probably be the defining TV movie of the '10s. So let's see how this cultural phenomenon compares to the crazy, campy, and meaningful TV movies that got us to this point.

Hurricane vs. Nuclear Apocalypse: The Day After

The Day After may not have started the tradition of politically-fueled TV specials, but it has staying power that other political thrillers of the '80s can't muster. It's a cold, clinical look at the aftermath of a nuclear missile much like the ones President Reagan was stockpiling at the heart of the Cold War. Although it may seem as melodramatic as Sharknado now, it was deeply disturbing for its time.

Although this is still an important reminder of the effects of nuclear warfare, it is perhaps too sincere for us jaded, emotionally distant millennials. We've signed on for the escapism of shark-filled tornadoes instead of gritty, post-apocalyptic realism.

Sharks vs. Sequins: Behind the Candelabra

Like Sharknado, Behind the Candelabra was in theaters for a limited time, making it a stand-out in the made-for-TV genre. Unlike Sharknado, this look into Liberace's personal life won a Golden Globe, an Emmy, and a BAFTA award. Sharknado may never achieve that kind of critical success, but it will keep kicking HBO's ass on Twitter.

"The Second One" vs. The Anthology: Trilogy of Terror

Although Trilogy of Terror started as a failed Twilight Zone-esque pilot, it was quickly recognized as a cult horror favorite. Much like the cult-to-mainstream arc of Sharknado's success, Trilogy of Terror has been lauded as one of the best uses of anthology horror in the genre since its relatively underwhelming debut on TV. If only the internet had existed in 1975, the Trilogy would have gained even more respect.

Duel was another instant classic in the horror genre, despite its humble origins. A yet-untested Steven Spielberg was signed on to direct this made-for-TV genre flick, which he quickly turned from a pedestrian thriller to actual thrill ride. Under his expert direction, the film used unseen terrors on the road to terrify audiences. Although Sharknado may never benefit from the same tactic, it's possible that director Anthony C. Ferrante is one of the smartest TV-movie directors in the business. After all, he's made a successful trilogy out of a film whose entire plot rests on sharks falling from the sky.

Angelina Jolie was relatively unknown until she starred as the title character in Gia, and the film's use of her rebellious sexiness and ability to frown will be forever remembered. However, Sharknado also makes great use of Tara Reid's '90s fame and squeaky voice is equally laudable. I doubt Sharknado will be a vehicle to anything except perfume sales for Tara, but nonetheless, she makes the cliches even campier.