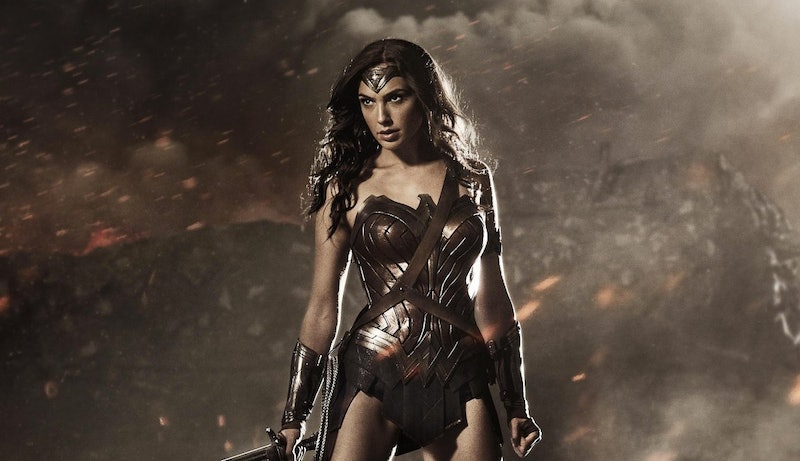 The phrases that generally accompany a female solo superhero movie are most-often "possible," "potential," "hopeful," and "future." From Wonder Woman to Black Widow to Captain Marvel, the status of female superheroes — and their chances at headlining solo films — has been in flux for years. These days, the public demand has reached a fever pitch. The question is: Which studio will be the first to stop hedging their bets and stalling for time? Who, among these superhero profiteers, will actually deliver the supply? To that end, could Sony beat Marvel and DC to the punch? The studio just announced plans for a female-led superhero movie come 2017.

Guardians Of the Galaxy 's release saw a record-breaking percentage of women buying tickets to Marvel movies: 44 percent, an uptick from The Avengers' 40 percent. Those women have always been there — the idea that women don't read comics or watch comic book movies has always been a myth, and as geek culture declares itself dominant, those numbers are simply growing. And there have been good things for women in worlds like Marvel's over these past few years: The Avengers fleshed Scarlett Johansson's Black Widow out so that she was more than a femme fatale with martial arts training and a sultry glare, and her role in Captain America: The Winter Soldier was practically a co-headlining one alongside Chris Evans' titular character. Warner Bros. announced Wonder Woman's inclusion in Batman V. Superman in December. Zoe Saldana's Gamora has a lot of people thrilled in Guardians Of the Galaxy.

And yet the pattern remains: As the title indicates, Black Widow didn't get co-headlining credit in Captain America: The Winter Soldier. Batman V. Superman is also notably missing a name. Gamora, though wonderful, is — like Black Widow before her — included as the sole woman in a larger, male ensemble. The Amazing Spider-Man 2 saw [iconic comic book spoiler alert] the murder of Gwen Stacy in the name of her love interest's heroic manpain. Things aren't as awful as they could be, but they're not great, either.

And audiences know it. Movies centered around female leads made more money than their male counterparts last year. Think your Frozens, but also think your Catching Fires, your Gravitys. Heroic women, when done with any semblance of competence, sell tickets. They also make for good press: The demand for representation in 2014 in real. When Marvel announced its plan to hand the title of Thor over to a woman, the public was, by and large, very loudly enthused — especially coupled with the announcement that they were handing Captain America over to a black guy.

But these victories for Marvel's PR team seem less victorious for the rest of us when you realize just how far Marvel seems from actually executing these kind of confident decisions on the big screen. Chris Hemsworth joked at Comic-Con that playing a female Thor "could be [his] Oscar," but he knows his job is safe. The mantel of Captain America is predicted to fall to Sebastian Stan's Bucky in the already-greenlit Captain America 3, in following with a notable comics storyline; Anthony Mackie's Falcon will likely have to wait. And when it comes to those ever-present Black Widow movie rumors, Marvel head Kevin Feige seems to be in a constant state of flip-flopping and skirting the topic. He's asked about it in practically every interview, and yet he never seems to say anything new. Take these comments from an interview with Badass Digest this past March:

I think [Black Widow] has a central leading role in [Captain America: The Winter Soldier]. What people are really saying is ‘When are you doing a standalone female superhero movie?’ The answer is: I don’t know. We only do two a year, we know more or less what’s coming up through ‘16/’17. With Widow what’s great is the interaction with all the team members, and the question is whether we want to pluck her out of that.

I’m very proud of the way the Marvel movies handle the female characters who are in all the movies we are making, as opposed to feeling the pressure of ‘When are you doing a female movie?’ We’re exploring a lot of Widow, and that’s going to continue with Age of Ultron in a big way.

It's this kind of willful ignoring of what people are actually looking for that brings him up in the conversation when Paul Feig's rumored plans for a female-led Ghostbusters movie surfaced Sunday. As a The Mary Sue commenter Jon E. Christianson wrote:

People are tired of waiting. And after the box office year women have had, it no longer even makes sense why we're still waiting. And so we've entered into this weird chess match — between the simple desire for representation and long-entrenched concepts of misogyny, and between many of the major studios (right now Marvel, Warner Bros., and Sony mainly, with an option of 20th Century Fox joining the fray if they're feeling it) dancing around each other trying to decide if it's best to get there first or to watch someone else get there first, and see if they fail.

Warner Bros., it should be noted, seems pretty damn close to actually making the move: They've got their Wonder Woman, and they've signed her for three movies. These are, almost glaringly obviously, the upcoming Batman V. Superman, to be followed by Justice League and, if all goes well, a Wonder Woman solo film. But considering Batman V. Superman doesn't even hit theaters until May 2016, we've still got a long while to wait. Meanwhile, as Guardians of the Galaxy co-writer Nicole Perlman noted on Twitter, Marvel's "got a lot on their plates."

Which doesn't really seem like an excuse, considering they're the ones designing the plates in the first place.

Sony recently expressed interest in stepping up to the bat: They saw a reluctance for endless repeats of what had come before and so moved Amazing Spider-Man 3 to 2018, teasing a female-led film for 2017. As one source with reported "knowledge of the plans" spelled out to Deadline:

What other movies we could do was something everyone started talking about when shooting the last movie. With Salt, Wanted and Lucy, there is a huge appetite for this right now. [...]The one thing you can’t ignore is the fans. There was a rejection going on with having another Spider-Man come out so soon, and you have to listen to the fans in this world. We all took a good look in the mirror and said, we have to try to have to figure it out and revamp it.

Who exactly would headline their female-led film is still very much in the air, as is seemingly everything else. It feels like everybody has pieces on the board. So will it be Wonder Woman to lead the charge for female solo movies? Will it be someone Sony has in their belt? Or is Marvel currently working to sign a Captain Marvel, or confirming Johansson's commitment to continue on as Black Widow?

The biggest question, it seems, is if the people in charge of these franchises will ever stop staring at the chess board and actually move a piece.