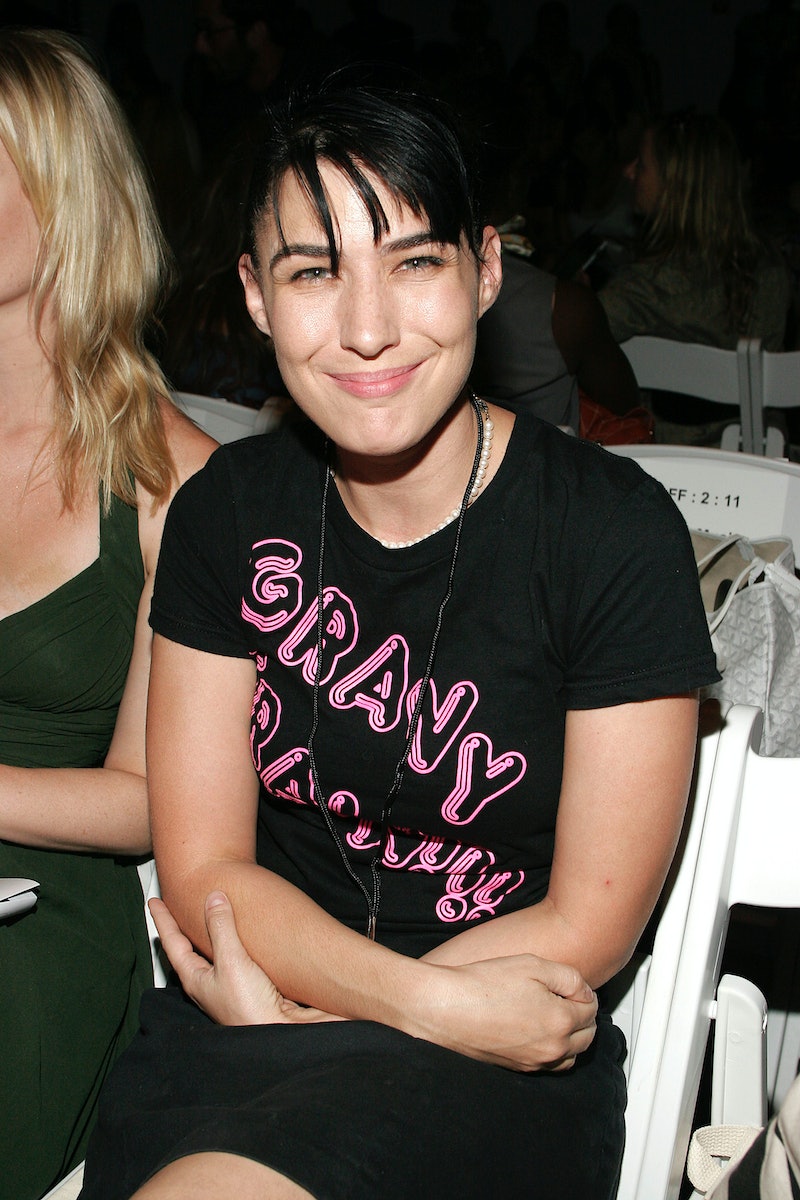 Miley Cyrus, who has caused many style riots, by chopping off her hair and getting tattooed, paid homage to Riot Grrrl veteran Kathleen Hanna, formerly of Bikini Kill, with a vintage pic of the singer (and wife of Beastie Boy Adam Horovitz), performing in her panties like her badass self. Cyrus even posted a picture an iconic Riot Grrrl shot: an image of Hanna with the word "SLUT" scrawled across the belly, a signature move about taking the power out of and back from derogatory words often ascribed to females. The photos prompted a response from Hanna, who said she had ideas about working with Cyrus. That is, if Miss Miley is daring enough to do so!

But what's most important about the stroll down feminism memory lane is that someone with the cultural reach and impact of Miley Cyrus pointed to a once booming movement that sought to empower women through action, rather than through talk.

If Riot Grrrl is before your time or you are not familiar, here's the Reader's Digest version. It was a movement that gained steam in the 1990s, when fanzines ruled the roost as a means of communicating and going viral all over the world. Girls were not afraid to enter moshpits at punk shows. As with every counterculture movement, it came with its own unique look and style, one that was eventually co-opted at mass market.

The accompanying look primarily consisted of girly and girlish dresses, that were either flowery or adorned with Peter Pan collars, paired with combat boots or Mary Janes. Think Courtney Love during Hole's heyday.

It was often called the "kinderwhore" look, since it mixed grown up with little girl, and therein lived part of the statement that was being made. Girls were wearing what they wanted and taking power back by using decidedly female pieces. They could love being girly without being submissive or subordinate.

Red lipstick was also a Riot Grrrl signature, as were little girl barrettes clipped all over the hair. Riot Grrrls often scrawled negative words on parts of their body, but not because that's what they thought of themselves. If they owned these words, they could not be defined by them.

Altogether, the look was an anti-glam expression of feminism.

The movement sought to give women a voice, one that came calling from the underground. It involved Grrrls making music, fighting for equal footing in a male-dominated musical culture, fostering a space where women felt comfortable, welcome, and safe while enjoying the music, and making far-reaching political statements.

Since '90s nostalgia is such a thing in 2014, the Riot Grrrl ethos, which was pro-girl, should come back into favor. The look was so emblematic of the time and the subculture and the message is not passe or nor is it diluted; in fact, it's as important as ever.

That's Hanna above, performing in her panties and generally not giving a you-know-what about norms and mores. Below is her tweet to Miss Miley.

If you want to be proud of being a girl, spark some fourth wave feminism, and pay homage to a look long since in the rearview, here's how to do it. But remember that the ideology is just as important as the image. The image is and should be the powerful visual to get people to pay attention. Then you reel 'em in and get them to perk up and understand the ideals.

A babydoll dress is very Riot Grrrl, and this high-waisted, short-hemmed cut is back in fashion. This grunge-like option by Evil Twin Faded Glory is roomy, cute, and comfortable enough to wear while doing things like spreading the word about feminism, organizing meetings with fellow Grrrls, and reading up about Riot Grrrl history. ($109, urbanoutfitters.com)

Girly dresses are balanced out by clunky boots, like these Doc Marten Mary Janes. The juxtaposition and contrast of a femme dress and big ol' shoes is empowering and stylish. Who says girls need to wear heels to be beautiful? Oh right, they don't! When you've got work to do and a message to send, a sensible, supportive shoe is necessary. ($110, docmartens.com)

Riot Grrrls often clipped a bunch of cheap, colorful, and plastic barrettes, normally seen in the hair of toddlers and grammar schoolers, in their hair. It was another feminine and girly contrast to the boots and the message. This mixing of styles takes the female paradigm, shifts it, and turns it on its ear. And, obviously, Miley Cyrus is super on board. ($2.49, cvs.com)

Red lips, a pretty universally recognized symbol of femininity and feminine wiles, were also incorporated into the look. But with Riot Grrrls, scarlet lips conveyed power. If you have something important to say, you may as well speak from a pair of bold, strong lips. NARS Velvet Matte Lip Pencil in Dragon Girl is a modern option to use. ($25, NARS.com)