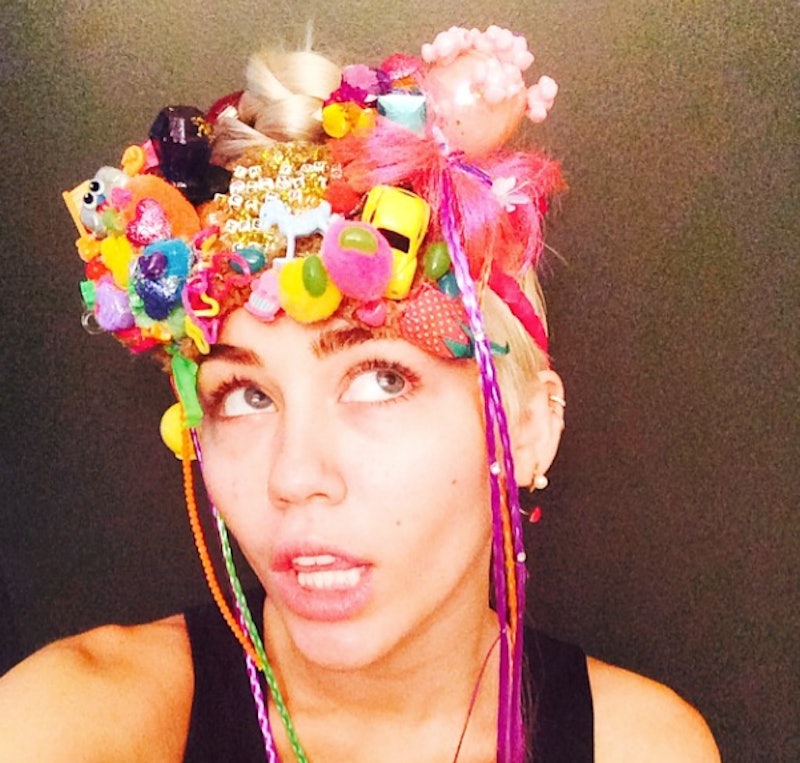 Think you’re an extreme crafter? Think again. Unless your days of DIY look like those of Miley Cyrus, you’ve been holding back. Believe me, baby girl has been taking homemade artwork seriously lately. It’s kind of amazing, but it’s also sort of dark. For those of you who haven’t seen them, her creations are, well, interesting. When I say "interesting," I mean the stuff of childhood nightmares. They’re sort of like the devil traps in True Detective. If I could succinctly describe the experience of crafting with Cyrus, it’s like Lisa Frank meets True Detective.

Seriously, whatever is in arm’s reach becomes prey for her glue gun. I know because I follow her on Instagram. You really should, too. Other than the chronicles of her hair, you’ll get a glimpse into the whirling dervish of Miley’s psyche. That is, as much as her bonkers artwork can reveal to you and that would appear to be a fixation in childhood. From careful observation, I can liken a DIY day at the Cyrus residence to the following things: the most fun ever, a therapy session with a troubled child, smoking a joint dipped in formaldehyde, or maybe, just maybe, a trip to Carcosa.

Miley loves posting her inscrutable creations. They’re kind of like Rorschach inkblots; every person sees a different thing. At one point, I thought they looked like Christmas trees made from old toys. You could call them party hats made from garbage. It all depends on your mind. Yesterday, she made this macabre headdress of stocking stuffers.

Isn't this just a crown fit for a Yellow Queen? Perhaps she could play the Errol Childress to Jennifer Lawrence and Emma Watson's renditions of Rust Cohle and Marty Hart in True Detective Season 2.

Here's what she ultimately made. It's kind Blair Witch-y with notes of Hello Kitty.

She calls this one a party hat. Also, is that a bottle of perfectly good nail polish at the base of this? What a waste!

Quite frankly, I can't totally make up my mind on these little projects. Actually, I feel the same way about them as I do about most of the episodes of True Detective. Intrigued, yet perplexed and disturbed.