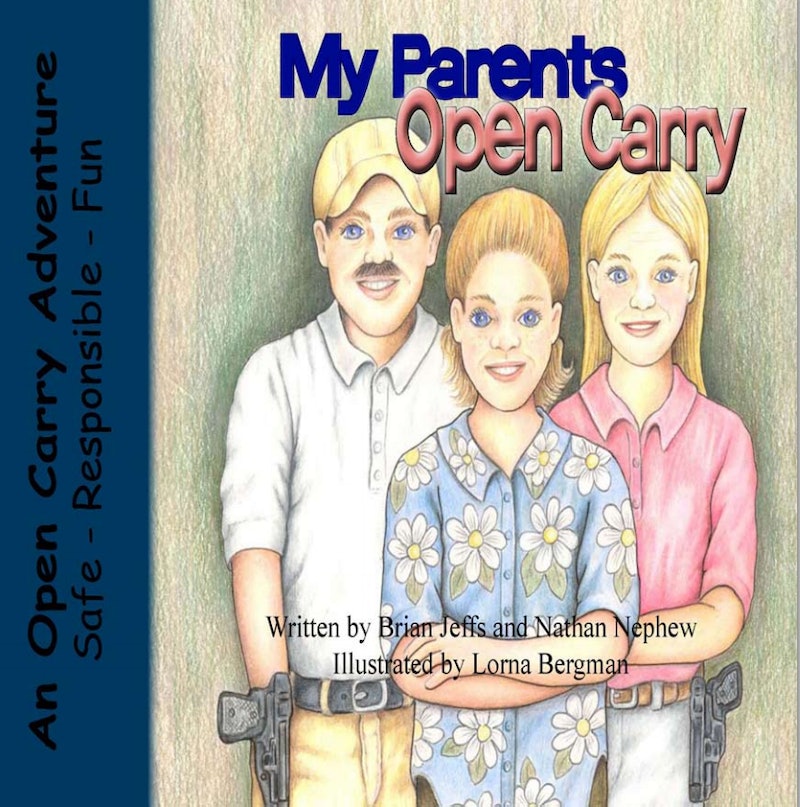 A new, untapped market in children's book publishing has recently surfaced, and it's already generating a lot of buzz and controversy: pro-gun children's books. I'll give you a second to read that sentence again.

So far, there's only one offering in this niche market, My Parents Open Carry by Brian Jeffs and Nathan Nephew. The book, published by White Feather Press and available for purchase in print or as a downloadable PDF, was written by Jeffs and Nephew after they "looked for pro-gun children's books and couldn't find any." Neither author is a professional writer (according to their bios, Jeffs is a senior geologist for the state of Michigan and Nephew is a software developer), but they are co-founders of the pro-gun lobby group Michigan Open Carry, so I guess that qualifies them to write a book with the express purpose of:

providing a basic overview of the right to keep and bear arms as well as the growing practice of the open carry of a handgun ... Our goal was to provide a wholesome family book that reflects the views of the majority of the American people, i.e., that self-defense is a basic natural right and that firearms provide the most efficient means for that defense.

My Parents Open Carry seeks to fulfill that goal by showing a "typical Saturday" in the life of the gun-enthusiast, Midwestern Strong family — dad Richard, mom Bea, and 13-year-old daughter Brenna — that includes trips to the hardware, grocery, and book stores, as well as a shooting range. There's lots of proselytizing about how darn safe and great guns are, and how anyone who thinks otherwise is woefully misguided. It includes several illustrations by Michigan artist (and gun enthusiast) Lorna Bergman in which guns are featured prominently.

Jeffs and Nephew are not subtle about the fact that this book is a means to promote a pro-gun agenda. Some of the text is lifted almost verbatim from the Michigan Open Carry website, including this explanation Brenna's dad gives to some teenagers about why he carries his gun openly:

Open carry can deter a crime, it's a faster draw, and it's more comfortable in the summer when we wear light clothing. It also brings gun ownership out of the closet and into the mainstream and shows the public that good people keep and bear arms.

Of course, using organizational boilerplate as dialogue makes My Parents Open Carry more propaganda, and less a treasured tome to be honored with a place on the shelf alongside Goodnight, Moon and The Cat in the Hat.

As is often the case, propaganda quickly leads to misinformation and the manipulation of facts, and My Parents Open Carry is no exception. There are plenty of themes and situations that stretch the limits of its credibility.

The idea that people who openly carry firearms actually help deter crimes comes up several times in My Parents Open Carry. And Gun Owners of America have plenty of evidence that guns are used "2.5 million times a year for self-defense purposes," and that concealed carry laws contributed to lower crime rates around the country.

Statistics from organizations unrelated to the gun lobby tell a different story, however. As far as anecdotal evidence goes, although citizens with guns may contribute to declining crime rates in certain areas, there are still situations in which the concept backfires with tragic results. As indicated on FactCheck.org, the trouble with getting to the truth about whether guns actually help prevent crime lies in that it's hard to study what would have happened if the gun wasn't present. Although it may not be fair to completely call BS on this idea, My Parents Open Carry definitely does not tell all the sides of the story.

My Parents Open Carry also includes a lengthy discussion of the Second Amendment, and allusions to guns protecting citizens from a "tyrannical government." There's even a kindly WWII vet who explains to the book's young protagonist:

...when the United States was forming a new government, the Founding Fathers knew that the surest way to keep the new republic from becoming too powerful was to allow the citizens the right to keep and bear arms. This assured that the new government wouldn’t become too bossy, because the people had the means to fight against it.

It's a great history lesson, but it doesn't take into consideration that the America of 1787, when the Constitution was ratified, and the America of 2014 are different in many ways. Regurgitating the notion that American citizens need guns to protect themselves from their government in a children's book is not just audacious, it also doesn't take into account that if citizens want to take on their government, they don't necessarily need guns to do it.

Perhaps the book's most outrageous and controversial moment comes right at the end. Throughout the story, readers have been told that Brenna's parents promised her a special reward for getting straight As on her report card. When the family makes its final stop of the day at their favorite shooting range, Brenna's reward becomes painfully obvious:

Forget money, new clothes, or an iTunes gift card — the 13-year-old gets her very own handgun. Technically, it won't be "hers" until she's 18, as her dad explains, but why should her tender age mean that she has to miss out on all the gun-slinging family fun? It's just like giving a 13-year-old a car to practice on until she reaches the legal driving age. That's a thing people do, right?

To the surprise of absolutely no one, My Parents Open Carry has become the latest lightning rod in the gun control debate. Critics have described the book as "bizarre," "chilling," and "probably the worst children's book ever." Outside of the positive blurbs on the book's website, people don't have a lot of good things to say about My Parents Open Carry. Even the five-star reviews on Amazon belie a distinctively snarky, distasteful tone:

My Parents Open Carry is also making international headlines, and not doing much to disprove the image of all Americans as pistol-packing cowboys that is prevalent elsewhere in the world.

This story can't end without a cherry on top, of course: My Parents Open Carry is not even the most shocking title published by White Feather Press. For that, look no further than the "fun book" Raising Boys Feminists Will Hate by Doug Giles, which you can get for free when you order a hard copy of My Parents Open Carry. I declined the offer because there was only so much I could take in one day.