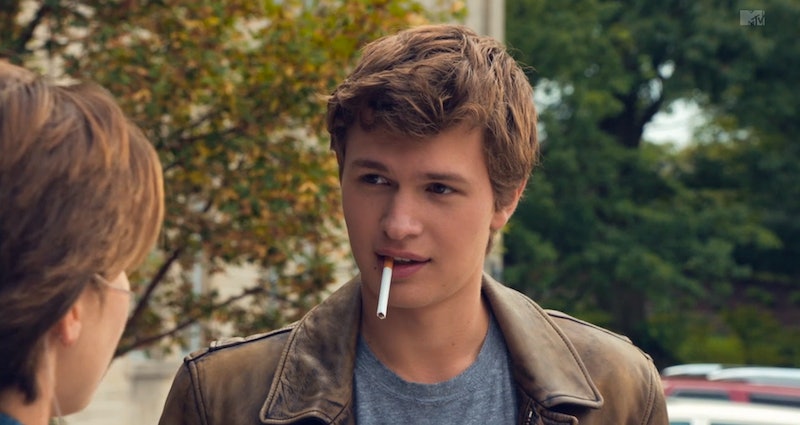 We've finally come full-circle, Nerdfighters and Potterheads. The Fault in Our Stars and Harry Potter finally got the mash-up they deserve and it's even better than you ever imagined. The Internet is full of perfect riffs on Augustus Waters' "It's a metaphor" line, but this one, from Harry Potter and the Deathly Hallows Part 2, might be the best yet. Especially since diehard fans of both phenomena are carrying around the knowledge that the TFiOS film and the Potter film franchise shared TFIOS production designer, the amazing Molly Hughes. Not even Professor McGonagall would be able to stifle a smirk when looking at this perfect application of Gus's famous line to the Potter series.

The mash-up is made up of five gifs from the scene in Deathly Hallows Part 2 where Harry finally has possession of the Elder Wand, following the Battle at Hogwarts and Voldemort's demise, and he snaps it in half while Ron and Hermione look on. (Really, that thing was so much more trouble than it was worth.) And apparently, Harry is almost as sick of hearing and discussing "It's a metaphor" as you are following the incredible success of the TFiOS film.

So, I have to ask, J.K. Rowling, is Harry snapping the Elder Wand really a metaphor?

More like this
Sadly, 'Fantastic Beasts: The Secrets Of Dumbledore' Isn’t Streaming — Yet
By Arya Roshanian
The 'Hocus Pocus' Sequel Finally Has A Release Date & It Makes Total Sense
By Shannon Barbour and Radhika Menon
A 'Bridgerton' Star Just Dropped A Major Hint About Joining The Live-Action Barbie Cast
By Bustle UK
9 Honestly Unbelievable Revelations From The WAGatha Christie Trial
By Frances Stewart
Get Even More From Bustle — Sign Up For The Newsletter