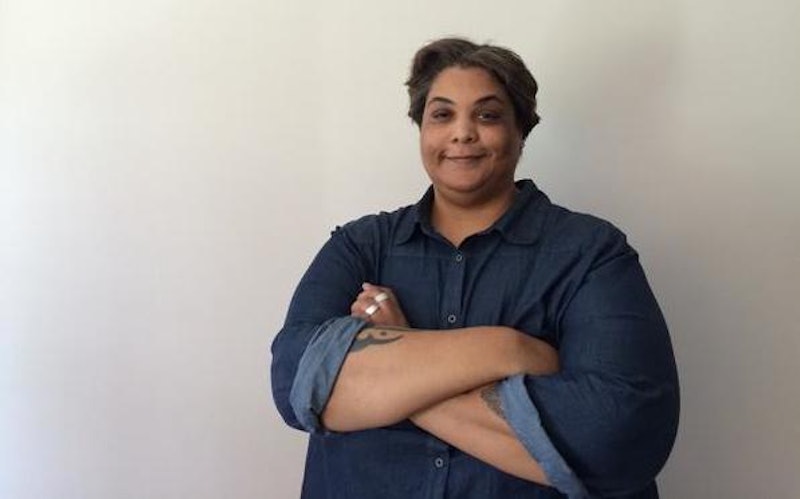 This summer has been the summer of Roxane Gay, and the world is the better for it. Her first novel, An Untamed State, was published by Grove Atlantic in May, and her essay collection Bad Feminist has just been released by Harper Perennial (it happens to be our August Book of the Month, by the way), and they are both exceeding every ridiculously high expectation set for them.

But what may seem like overnight success is actually the product of decades of writing. As Gay told The Great Discontent, she started to publish her work "very carefully" in literary journals in the late '90s. For those who've followed her through Twitter and Tumblr — digital treasure troves where she'll share lyrical spare thoughts, eviscerate racist Best Buy employees, or just narrate a Barefoot Contessa episode — the publication of both of her books is cause for massive celebration.

But don't listen to me — listen to absolutely everyone talking about her, aka the entire Internet. And if all the chatter makes you want to dive into Gay's work, here are some fantastic essays and stories by the writer you can read now, for free, to convince you why you should be a Roxane Gay fangirl, too.

A brief and quietly devastating story about a kid named Gérard who moves to America from Haiti. Gérard receives a nickname from his fellow classmates, and it takes a little while to sink in, but once it does, you’ll understand — and maybe even instinctively feel — the humiliation that Americans can inflict on immigrants. Gay, who has Haitian parents and grew up in Nebraska “raised as a Haitian-American,” imbues the short scenes with a potent mix of secondhand and firsthand embarrassment.

BuzzFeed: "Not Here to Make Friends"

The title is a commonly trumpeted battle cry for female reality competitors, whether they’re fighting for a bachelor or a modeling contract, but Gay uses it to frame her wish for more unlikeable female characters in literature. Published six months after author Claire Messud scoffed at an interview question about the likability of her latest novel’s female protagonist — "For heaven’s sake, what kind of question is that?" Messud had bitten back — "Not Here to Make Friends” puts forth the claim that when male literary characters are dark, disturbing, moody, volatile, just plain cranky or otherwise psychopathic, they are still validated as “ultimately compelling.”

Not so for female characters, who, from Nellie Olson to Countess Olenska, are often judged as if they are competing for Miss Congeniality rather than existing as complex, human characters. Essential reading for anyone who wonders why Walter White gets all the love and Skyler White gets the Internet’s ire.

Key sentence: "I want characters to do the things I am afraid to do for fear of making myself more unlikable than I may already be."

xoJane: "My Body is Wildly Undisciplined and I Deny Myself Nearly Everything I Desire"

In the aftermath of this year’s Biggest Loser finale, in which a contestant lost what many considered to be an unhealthy amount of weight, Gay considered her own relationship to her body. The Biggest Loser “is a show about unruly bodies that must be disciplined by any means necessary,” she writes, “and through that discipline, the obese might become more acceptable members of society.” She ticks off a list of ways she tries to make her “wildly undisciplined” body more acceptable — by wearing dark clothes, by not eating junk food in public, and by denying herself over and over again.

The problem of body image in America is real, and Gay is not afraid to reveal the parts of herself that don’t fit into the typical female weight loss narrative of deprivation → thinness → happiness. And this is a radical move; a move that I wish more women writers would make; a move I believe will let other women first feel OK with feeling insecure, and then feel like they no longer need to be insecure at all.

Key sentence: “I said, 'People like me don’t get to eat food like that in public,' and it was one of the truest things I’ve ever said.”

Ask a normal person for a list of book recommendations, and you’ll (probably) get one, but ask Gay for a list of book recommendations and she’ll give you a genre-hopping digest of literature that registers pretty much across the board on the high-low culture matrix. Doesn’t even matter if you didn’t want to read a bunch of stories about virgins — now you’ve got options from J.G. Ballard to Jeffrey Eugenides, and you probably want to read them all. This list is proof that nothing is mundane in the hands of Roxane Gay.

Key sentence: “You know virginity is a big deal when a vampire breaks a bed frame as he breaks his new wife’s hymen.”

HTMLGIANT: "Do As Franzen Does. Do What You Like."

This could have been one in a thousand posts making fun of the tech-phobic Corrections author and his distaste for anything that has to do with the words “social” or “networking.” A ton of those pieces came out after he described using Twitter as “like writing a novel without the letter P,” and all of them said he was out of touch, a lame dude who just didn’t get it, yadda yadda yadda.

What set Gay’s piece apart was that she critiqued Franzen for ignoring something important — writers who aren’t as successful as Franzen need Twitter to promote their books, communicate with their fellow authors, and build a literary network. Without the infrastructure (and money) of big publishing, writers can use Twitter (and Facebook, and G+, and other social networks that have yet to be invented) to get their names and words out there. Gay’s best advice about social media is to chill the F out. “Do something where you are willing to show that you give a damn, however you interpret giving a damn,” Gay writes. If only Jonathan Franzen went on the Internet enough to even read that himself.

Key sentence: “It’s like Franzen is saying, 'I cannot swim in my car and therefore my car is not useful.'”

The Hairpin: "Adventures with UPS Man"

Those who follow Gay on Twitter will know that she has an ongoing flirtation with her UPS Man (whom she has since moved away from — oh, the humanity!). And why wouldn’t any of us fall in love with a cute dude who shows up every week to deliver us, um, packages? Here, she compiles all of her not-so-innocent thoughts about UPS Man. You will never think of the UPS slogan the same way again.

Key sentence: “Lord y’all. The UPS Man(hot) is training a another UPS Man(hotter), and they just came to bring me something.”

“The desire for authentic representations of girlhood is like searching for water in a desert.” Gay bemoans the lack of real, representative examples of young adult women we have on television and in the movies, referencing the new-at-the-time first season of Girls . Girlhood is “too vast” and “too individual” to be summed up by a single show; Girls just bears an unfair amount of weight in the argument that it doesn’t represent a woman’s early 20s for everyone. According to Gay, the problem is not that Girls is a show made by and about privileged white people — the problem is that there are not enough other shows creating stories that less privileged and less white women can relate to.

Key sentence: “Every girl or once-was-girl has a show that would be best for her.”

Gay’s feminism is clearly legible in her nonfiction, but her fiction bears it, too, though sometimes in subtler ways. The now-defunct journal Kill Author published Gay’s story in its second issue, and it reads like either a cryptic third-person diary, an aspirational instructional manual, or notes from a spy, depending on who you think is talking.

Key sentence: “She takes dictation and makes note not of what he says, but rather what she thinks.”

Spork Press: "Do You Have a Place for Me"

This is a story about two female friends spending a weekend together, and it’s told in a tangled cascade of ecstatic, almost run-on sentences. I don’t want to say anything more about it because it is best experienced unspoiled.

Key sentences: “We will be bright lights and spectacle. I will think these are those better days.”

Gay spins her love for Law & Order — ”the exquisite dramas of (in)justice” — into a fragmented, haunting series of vignettes. The classic tropes and moods of L&O are translated into juicily bitter poetry. Assault in alleyways, cadavers laid out in a morgue, Very Special Episodes: it’s like the “dun dun” sound effect, in fiction form.

Key sentence: “His tears stain his cheeks and seep between their mouths.”

The Rumpus: "We Are Many. We Are Everywhere."

Not a piece of fiction and not nonfiction exactly, but still one of the more important collections of words to exist on the Internet: a list of writers of color, plain and simple. This list exists as a defiant reminder to whitewashed literary journals, wild inequality in book reviews, and publishing companies that describe the imbalance as a historical problem — not to mention narrow-minded or lazy readers.

And even though this list should probably be bookmarked on everyone’s browser of choice, it also reminds me of the bigger desire — that writers of color, female writers, queer writers, writers who exist outside of the literary status quo, can achieve success, find a wider readership, purchase whatever the hell they want to at Best Buy, kick ass, take names, then do it all again. Roxane Gay is the gold standard, and she’s taking us along for the ride. We should all be such bad feminists.