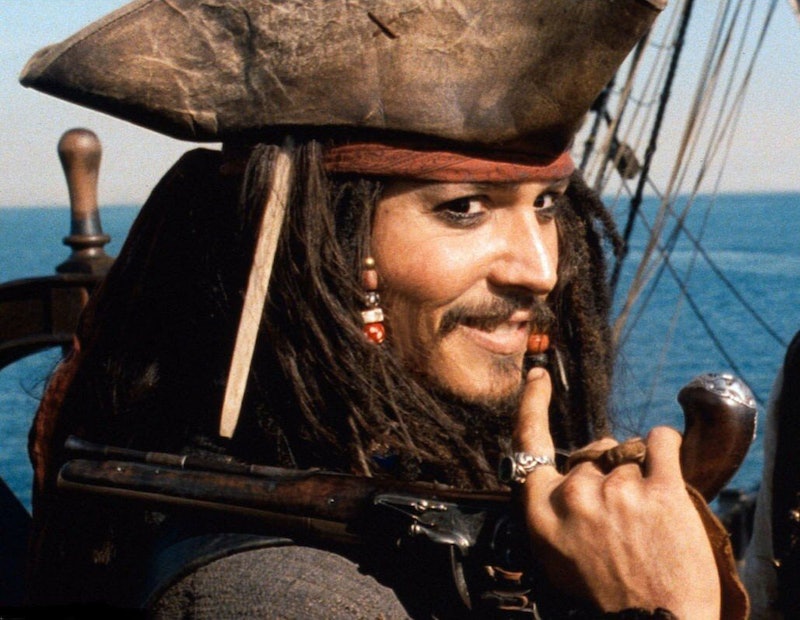 Toward the beginning of 2004, while most people were drooling over Return of the King or desperately hunting down news of Bennifer, I spent several straight months watching Pirates of the Caribbean: The Curse of the Black Pearl at least once a day. Yes, I nerded out over this movie with a disturbing intensity — set my alarm clock to the jaunty theme at full blast, changed my AIM screenname to "deppobsessed437" — and when my parents politely suggested that we please watch anything else, just this once, for the love of God, I'd simply reply that I was disinclined to acquiesce to their request. So you can only imagine my excitement when I learned that the film was profitable enough to earn a continuation in Pirates of the Caribbean: Dead Man's Chest — and just how severely my innocent hopes were dashed upon discovering that this sequel (and the next one, and the one after that) had all the cinematic chutzpah of a heap of wet garbage.

Of course, this hasn't stopped Jerry Bruckheimer & Co. from planning a fifth film — Pirates of the Caribbean: Dead Men Tell No Tales — which is now officially slated for release on July 7, 2017. Personally, I'm now making plans to incapacitate myself, Odysseus-style, for that entire month, lest the indignation literally melt my brain; even the rumor of Christoph Waltz's involvement isn't enough to unroll my eyes. In fact, over these past jaded years, it has only become clearer to me that the Pirates of the Caribbean series epitomizes a specific and infuriating set of Hollywood misconceptions — i.e., why film execs seem incapable of elaborating on quality material without draining it of everything that made it remotely enjoyable in the first place.

Because honestly, the original Pirates is still pretty great, even by my less excitable, oh-so-adult standards: You've got a plot with a few legitimate twists; a bland, hunky hero who is frequently mocked for being bland and heroic; old-timey guns and hats and goofy wigs; Geoffrey Rush at his high-camp best; Johnny Depp walking on set and saying, "Hey, I think I'm going to play this Disney character like Keith Richards on varying amounts of quaaludes, cool?" — and not only getting away with it (despite threats of termination), but pulling it the hell off to the point of an Oscar nod. Even the early-aughts CGI doesn't look that bad in the cool, clear light of 2014; apparently, faux-rotting flesh ages well. In short, for a movie improbably based on a theme park attraction, The Curse of the Black Pearl scored, hardcore.

Indeed, rather than shy from their ludicrous source material — all told, a plodding boat trip past some lurchy animatronics — the filmmakers seemed to relish it, crafting scenes that looked, jot for jot, like their Magic Kingdom counterparts: the Tortuga flophouse, the jailed prisoners with their dog bone. Even Barbossa's throwaway threat that "You're off the edge of the map, mate; here there be monsters" references an actual map you passed at the beginning of the ride, marked "HERE THERE BE MONSTERS" by the edge. And I mean, it's not like the sheer act of swashbuckling was a real box office draw in and of itself; as Cracked's Dustin Koski notes, just about all pirate movies prior were notorious and undeniable flops. Ultimately, it's hard not to imagine the filmmakers leaning into this farce of a pitch with the same fucks-bereft glee of the Coen brothers making The Big Lebowski.

In contrast, the sequels shuck any and all of that playfulness in favor of Big Cool Stunts™ with Massive, World-Ending Implications™ — e.g., a 20-some minute fight scene inside a giant, rolling wheel; barnacled Stellan Skarsgaard and his army of fish-hybrid friends; a supernatural quest to defy death; even an international pirates council tasked with ruling the seven seas, like a grimier, bangle-sporting UN. Worse, when the sequels go for a joke, it's more often than not a slapdash copy-paste of a memorable line from the first movie — the most grating of which has got to be Jack's never-ending series of rum callbacks ("Why is the rum always gone?"; "Hide the rum" upon re-meeting Elizabeth, etc.), never mind the fact that the original "rum" bit was itself a joke already predicated on repetition.

The one scene I'll give them, in the interest of fairness, is the white void of surrealist nightmares that is Davy Jones's Locker in At World's End — if only so I can convince whoever wrote that "rocks that turn into crabs" bit to hook me up with his or her acid connection. Still, much like the buccaneers' parliamentary quorum, this scene is ultimately a perfect example the filmmakers' wrongheadedness: Rather than just a pirate-y turn of phrase, "Davy Jones's Locker" becomes a mystical realm where only heroes dare tread, thus upping the stakes to cosmic, budget-exploding levels and disavowing the lovable swashbuckling of the original in one fell swoop.

It's the same trap the Star Wars prequels skipped merrily into, spending eons detailing the inner workings of the Trade Federation and introducing funky new graphic feats (insert requisite Jar Jar Binks bile here), instead of simply trusting a core group of scrappy characters to be compelling. And so it goes with Spider-man, X-Men, anything Michael Bay has even breathed near. In each case, the execs' apparently assume that "blockbuster" means "bombastic," "expensive" means "good," and, perhaps most pernicious, that "good" means "more," and only in the most literal sense (see: stale rum joke 29).

The impulse to franchise is all but built-in these days — to make not only the movie, but the next five movies, the video game, the action figures, the ice show, the record-breaking high budget porn parody. And it does make some degree of sense: Hollywood is a business, after all, and the surest bet that someone will buy your product is to link it to another product they bought before. Still, even assuming this systematized dead-horse battery is inevitable, there's a way to make a sequel without hollowing out the original and pumping it full of schmaltz. Otherwise, an inspired "LOL" of a film like Pirates spawns an awkwardly self-serious saga in which the actors look bored, the plots sag, and the hearts of fans worldwide are slowly ground to chum.

So if there's one thing that I'd ask, humbly, from this dreaded upcoming quint-equel, it's a return to some semblance of The Black Pearl's stakes, in which the villains want gold (or, apples) more than they want world domination and fight scenes are kept to a comfortable 15 minutes or less — maybe even a tiny swipe at genuine, hack-free levity?

And if nothing else, just please, for fuck's sake, shut up about the rum.