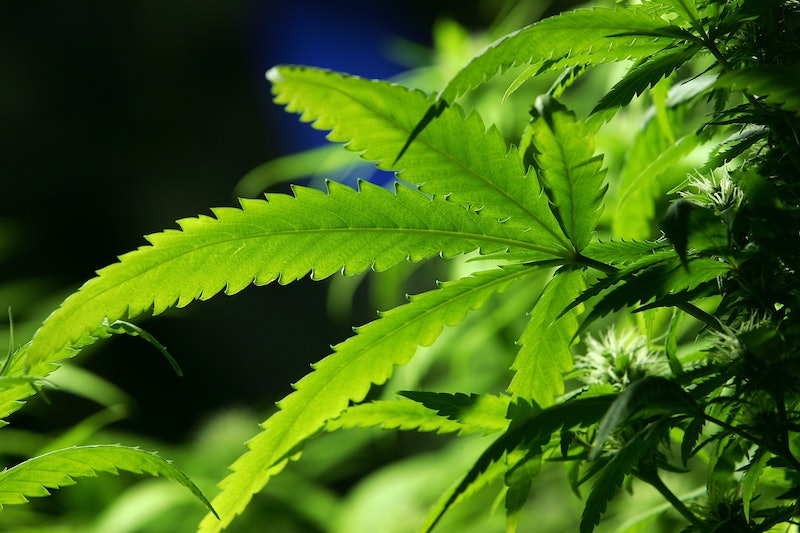 Colorado may have been the first state to legalize marijuana, but Rhode Island residents smoke more pot than any other state's inhabitants. That's right — the smallest state in the U.S. is the biggest smoker of cannibis, according to the most recent National Survey on Drug Use and Health. One in every eight Rhode Islanders over the age of 12 smokes weed on a monthly basis, making it the newest hotspot for American pot aficionados.

Standing in stark contrast to Rhode Island's frequent usage is Kansas, where only 4 percent of residents reported smoking in the last month. Overall, the south appeared the most straight-laced of Americans, with just 5.83 percent overall admitting to recent weed usage. Unsurprisingly, the west coast takes the cake as the most weed-heavy region of the U.S., with around 9 percent of residents smoking on a monthly basis.

A shocking close second to Rhode Island's 13 percent of pot-smoking residents was Alaska's population, 12.97 percent of whom reported using marijuana in the last month. Joining these two states in the double-digit usage ranks are Colorado, Washington D.C., Montana, Oregon, Vermont, and Washington. Of these eight most weed-heavy states, all but two (Washington and Montana) have either decriminalized or legalized marijuana usage.

The NSDUH also confirmed the generally held belief that weed appeals most to people between the ages of 18 and 25. Nearly one in five Americans in that age range have smoked in the past month, but some states are contributing significantly to that average. In Vermont, a stunning 33 percent of 18- to 25-year-olds have smoked pot in the last 30 days. This is nearly double the number of Americans who smoke cigarettes, according to the CDC.

With the ever-burgeoning number of Americans choosing to use marijuana, it comes as no surprise that states across the country seem headed down the inevitable path of legalization. And while pot naysayers have often pointed to the dangers and health risks associated with the drug, many proponents of marijuana legalization have pointed out that cannibis is far safer than a few legal drugs, mainly alcohol.

In January, President Obama made marijuana users cheer — and his critics shudder — when he told the New Yorker, "I don't think [marijuana] is more dangerous than alcohol." And while Obama didn't exactly substantiate his claim, many studies have backed up his statements in the months following his bold proclamation. While marijuana is by no means safe, relatively speaking, its health consequences seem less troublesome than that of alcohol.

This has become a particularly salient point in light of Tuesday's article in the Washington Post, headlined "Since marijuana legalization, highway fatalities in Colorado are at near-historic lows." Author Radley Balko isn't making this up — the first seven months of 2014 have seen fewer fatalities on the road in Colorado than the average first seven months of the last 12 years, since 2002.

Of course, this doesn't mean that Colorado's decision to legalize marijuana in 2001 immediately led to safer driving conditions, but Balko's examination of the Colorado Department of Transportation's data certainly goes a long way in debunking claims that pot has led to more traffic fatalities.

There is also mounting public pressure to legalize marijuana, as evidenced by the New York Times' decisive proclamation "to repeal this version of Prohibition." In their first article in a series discussing the vices and merits of marijuana legalization, the editorial board of the Times endorsed state-level regulation of the drug, citing disparate impacts on minorities, only "minor problems" of addiction and dependency, and popular support of marijuana as motivation for legalization.

The Times also took a moment to recognize the scientifically-confirmed dangers of marijuana to adolescents. As David Sheff pointed out in his piece in Time Magazine, marijuana has the capacity to "impair high level thinking," and "impedes kids’ biological and emotional development." But regardless of its risks, of which there are many, Sheff points out, "The illegal status of marijuana hasn’t stopped millions of kids from smoking it every day."

The NSDUH certainly proves this point — an average of nearly 8 percent of kids between the ages of 12 and 17 have smoked pot in the last month. In Vermont, 13.36 percent of young teenagers have recently used marijuana, and these numbers certainly aren't on a declining trend.

The real safety measure, then, experts seem to agree, is education. Not stigmatization, which proponents of legalization say is what the current criminal status of marijuana perpetuates. Pot and pot users are no longer hiding, and the NSDUH only serves to reinforce the point that marijuana is becoming increasingly mainstream. And legal or not, it seems as though the folks in Rhode Island are going to keep on smoking.

More like this
Scotland's First Period Dignity Officer Has Sparked Backlash
By Darshita Goyal
Why Eurovision 2023's Host City Won’t Be Revealed For A While Yet
By Sam Ramsden and Rachel Mantock
25 Things I've Reduced My Life To, In Addition To WFH In My PJs
By Ginny Hogan
11 Upper Back Exercises That'll Help You Stand Upright
By Carolyn Steber
Get Even More From Bustle — Sign Up For The Newsletter