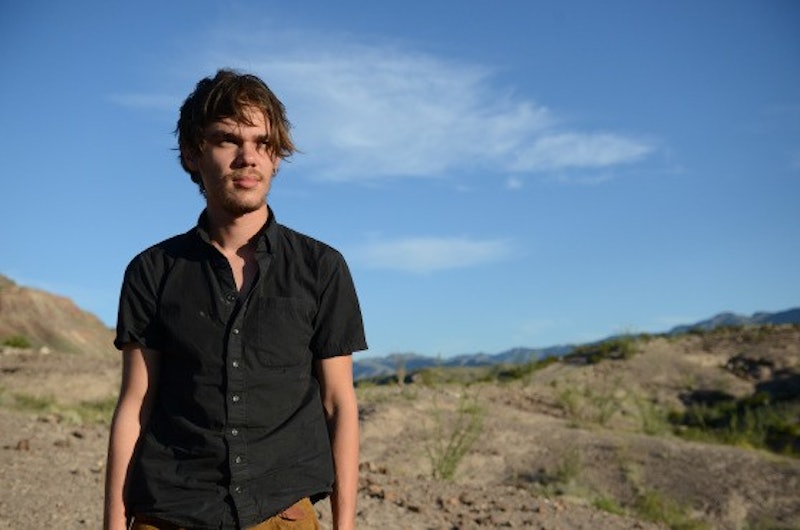 It's no spoiler to say that at the end of Boyhood , Richard Linklater's epic, acclaimed new film, the boy in question grows up. After watching him go from child to adult, naive little boy to mature, curious college freshman, the last we ever see of Mason is still just the beginning of his life. As the movie ends, the question lingers: Where does Mason end up?

"I think probably alone," actor Ellar Coltrane, who plays the boy in question, tells Bustle, before laughing and quickly clarifying, "I mean alone, like, not in a relationship. Traveling, hopefully. But it's hard to say. I don’t know where I’m gonna be in the next couple years."

It's not as strange as it might seem for a movie's star to base his character's future on his own. Boyhood is a work of fiction, but it's every bit as much Coltrane's childhood as it is Mason's. The actor, now 19, has been a part of the film since the age of six, when Linklater decided to begin one of the most exciting, innovative projects in movie history — a film that would follow the lives of a boy and his family, from childhood to adulthood, without the help of CGI, makeup, or new actors.

"I really want to go to school. That's probably the first thing," Coltrane says. "Hopefully I can find more projects to work on, but first, going to school."

"For so much of the time we were making the movie, the end goal of it, of coming out and being a film, was so distant," says Coltrane. "It’s not something that I thought about very much. It was much more about the process of making it and making the character."

Yet once Boyhood was released, everything changed. The film received rave reviews, the Oscar talk began, and Coltrane, previously unknown, became a movie star essentially overnight. In interviews, he's spoken of panic attacks and unnerving discomfort.

"It’s all pretty overwhelming for me," he says.

For support, he's leaned on his on-screen parents, Ethan Hawke and Patricia Arquette.

"Ethan and Patricia, definitely, are a big help," he says. "They're there for me."

Still, Coltrane says it was overwhelming to see Boyhood on-screen, in its entirety, after over a decade of filming scenes for only a few days a year.

"Seeing the film for the first time was kind of surprising," says Coltrane. "And having people connect with it, and just pour out such tender and genuine emotion — it’s rare to have someone, anyone, be as emotionally honest as so many audience members have been towards it. It’s rare to have a friend be that open with you, much less a stranger, so that’s been very surprising, and incredible. You don’t expect that."

Nearly a month after its release, Boyhood has garnered unanimous acclaim, with critics already predicting Oscar nominations and, at the very least, a unique place in cinematic history. Audiences have responded strongly to Linklater's grounded, relatable take on the highs and lows of childhood, as seen through the eyes of Mason.

"There was just more up there [on-screen] than I really knew," says Coltrane. "Emotionally — it’s a lot that consciously, I didn’t realize I was showing."

The experience for his real-life family was surreal as well.

"It's hard for us to talk about it to each other, not just my family, but all of us that were so close to it," Coltrane says. "They were around for a lot of the filming, they were on set, they were part of that family for a lot of the years. So it’s hard to – there aren’t any words. But I think it’s a little different for them, just because they already watched me grow up, I guess. I think it’s really emotional for them because I’m their child, but I don’t know. My dad’s really blown away by it, definitely. He feels like it’s important. But we don’t talk about it that much."

And the more times Coltrane views the movie, the more he says takes away.

"I’ve seen it several times now, and my experience with it changes every time I watch it," he says. "I can’t even imagine in 10 years what it’s gonna be like to watch. Because the first several times I saw it, where the film ends was now — that was where I was at that age, that was what I was going through emotionally. So it was very surreal to see that that’s me, and that’s where I am. But when I’m 30 or something, it’s gonna be a very different experience."

It's difficult to imagine Coltrane as an adult, when his childhood and adolescence have just been experienced so vividly on-screen. But the actor is already making plans, figuring out his future and finding his niche.

"I really want to go to school. That's probably the first thing," he says. "Hopefully I can find more projects to work on, but first, going to school."

Although nothing's in the works, he hopes to make more movies with Linklater, a director he's formed a close bond with over the decades.

"I definitely hope so," Coltrane says. "He’s a great guy to work with and just fun. I don’t know what it’ll be, but I hope I get to do it."

The platform of his work, whether it's acting, photography, painting, or music ("I'm kind of learning the banjo," he says), is almost irrelevant. Really, he just wants to make art.

"I just want to express genuine things," he says. "I want to keep acting, and I want to do all these things, but more than any of that, no matter the outlet, I just want to express tender emotions. I think the world needs that. I think that a lot of why people are so excited by Richard’s movie is because it’s so tender and simple and just kind of normal. There’s nothing really fantastic going on, nothing super dramatic or tragic. I think we’re over-saturated with caricatures and these dramatic, violent stories, and it makes it hard to appreciate normal existence, normal life, because most people aren’t superheroes."

He takes a breath.

"But I don’t know. I’d like to express more of that; that everyone’s life is just amazing and beautiful and that’s what it’s all about. It’s not about trying to be a superhero or a rockstar or whatever."

Out of context, that could sound like a speech out of Mason's mouth, not Coltrane's. And perhaps that's exactly the point: After 12 years, the actor and the character seem nearly interchangeable. Two artsy, thoughtful young men, about to enter a stage of their lives totally different than anything they've ever known — and they couldn't be more ready.