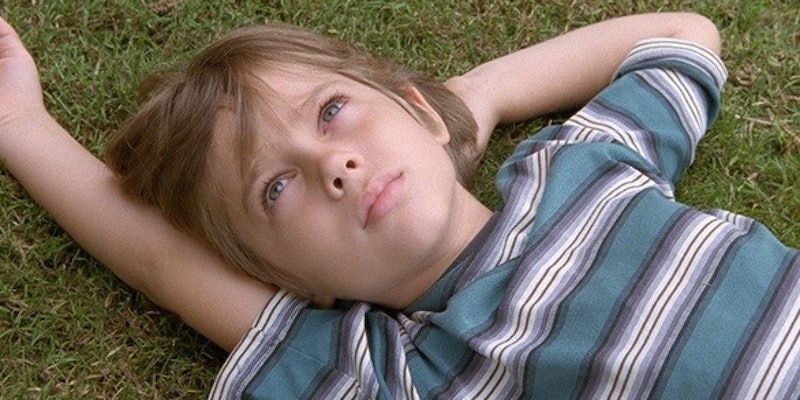 Based off just the summary of how it was filmed, Boyhood is going to be enough to change cinema forever — and the trailer, which breaks down just how the film was produced with the same cast of actors over a 12-year period just backs that up. And now, this new clip from Boyhood featuring stars Ethan Hawke, Ellar Coltrane, and Lorelei Linklater, does just that as well.

Though only running about a minute, the clip does a good job of highlighting Hawke's character, Mason Sr.'s struggle to communicate with and get to know his kids during the period of his and his wife's (Patricia Arquette) estrangement. "Talk to me," he urges his kids, Samantha and Mason Jr., before launching into a sample conversation that they could be having with their father if, in his view, they tried.

"Why is it all on us, though?" Mason Jr. asks, "What about you, how was your week? Who do you hang out with? Do you have a girlfriend? What have you been up to?" It's a mundane, simple conversation that most everyone has a version of with their family at some point in their lives, and yet, that's just the beauty of it — Boyhood set out to be a realistic representation of a boy's coming-of-age story, and it is.

You can check out the clip below. Boyhood will finally hit theaters tomorrow, July 11.

More like this
Lindsay Lohan Just Recalled A Hilarious 'Parent Trap' Story
By Sam Ramsden
Then Vs. Now Photos Of The 'Enchanted' Cast In 2007 & The Sequel's Stars In 2022
By Marina Watts
See 'Twilight' Stars Together Again For A Sweet Cullen "Family Reunion"
By Stephanie Topacio Long
Blake Lively's Reaction To Ryan Reynolds' Dance Video Was Pure Thirst
By Stephanie Topacio Long
Get Even More From Bustle — Sign Up For The Newsletter