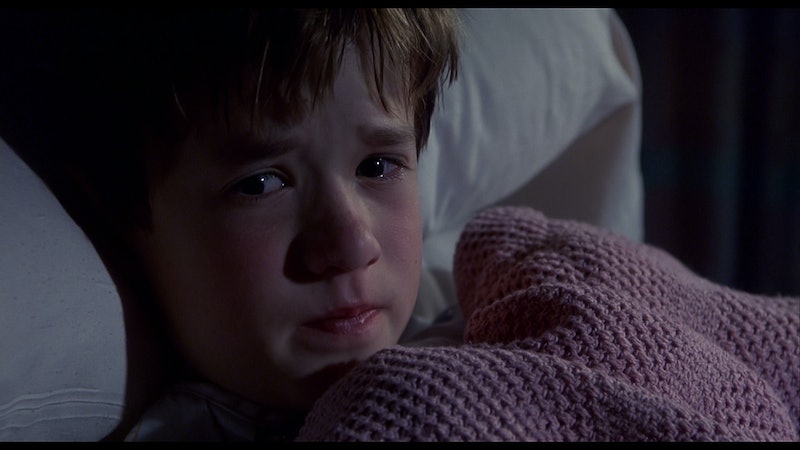 The Sixth Sense is known for many things: being M. Night Shyamalan's best movie, reminding us how cute Haley Joel Osment was as a kid, having one of the most original twist endings in all of film. Although it may be known for its many charms, there is usually one quote that audiences remember: the evergreen "I see dead people." Most people consider these four words just an eerie, memorable standalone quote, but they may be responsible for the world's first meme.

When I first saw The Sixth Sense, those four words were the scariest moments of the movie. Cole's (Osment) admission made my skin crawl since it somehow made his experiences even more real. Then again, I was young, and I thought ghost-girls were going to come out from under my bed at night. After watching the movie, I practiced my run-and-jump-into-bed-from-the-door technique like it was an Olympic sport. While I was hiding under the covers and avoiding Bruce Willis, the rest of the world was silently plotting ways to repurpose this striking movie catchphrase.

From outright parody to T-shirt to online graphics, "I see dead people" is responsible for one of the earliest memes that is still in use today.

After five Scary Movies and dozens of genre-parody spinoffs, it's hard to remember the humor of Scary Movie in a serious-horror-film world. The 15-second parody of "I see dead people" made its mark, starting the wave of parodies and memes.

The earliest memes turned "I see dead people" into either "I see dumb people" or "I see stupid people," often to hilarious effects. Although I first remember seeing this phrase on a bumper sticker, apparently the meme has been online almost 13 years. An early iteration was posted to a personal website in 2001, according to Know Your Meme, then reposted and reimagined all over the Internet.

From the early "I see dumb people" stickers to the latest "I see dead pixels" nerd shirts, there has been a healthy mix of sass, smarts, and outright snark.

Although The Sixth Sense predates memes, it has been one of the memes with the greatest staying power. While memes like Philosoraptor and Lame Pun Raccoon seem to have died down, "I see dead people" has had sustained traction over time. Don't believe me? Look at this shockingly steady Google Trends graph of the past, and worry why we haven't come up with a different master meme yet.

Luckily, the latest versions of this classic are often updated pop culture references, like the heartbreaking Steve Jobs shoutout above. Even smarter variants focus on the semantics of the original quote, or remix the visuals, often to cute-but-creepy ends. So! Here's to the quote that may have started memes, since it's clearly not leaving Tumblr any time soon.