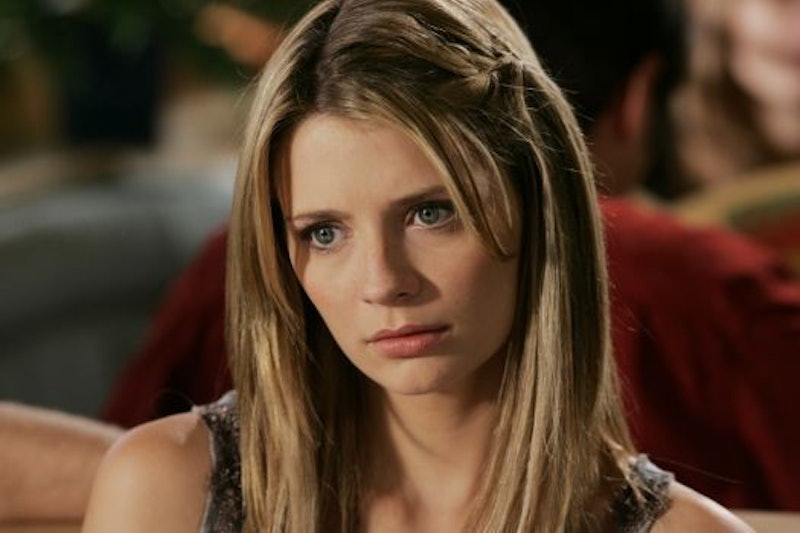 There are a lot of things I'd like to use a time machine for: lottery numbers, stock prices, a couple of high school math tests. Going back a decade to give advice to up-and-coming TV stars was never really on the list, but that was before I read an article in which Mischa Barton admits she regrets being on The O.C. In the piece, the actress says that if asked to do it all again, her answer would be "probably not." Being able to prevent the tragedy that was Marissa Cooper from ever existing? If there's ever a reason to mess with the space-time continuum, it's this one.

You see, Marissa Cooper, played by the monotone-voiced Barton, is one of the worst TV characters to ever grace the medium. She's whiny and annoying, selfish and narcissistic. From the moment she first appears on screen, creepily ogling Ryan until he offers her a cigarette, her entire purpose is to make things more difficult for the teens of Newport than they need to be. She starts fights, breaks up relationships, and forces her friends to (literally) save her life several times, doing absolutely nothing in return except RUIN THEIR LIVES.

I remember it all too well. This past spring, I decided to watch The O.C. , all four seasons, for the very first time. For years, friend after friend had egged me on to begin what they called "the greatest, well not really the greatest, but seriously it's the greatest" show of all time. Yet it wasn't until a few months ago that I decided to get started, and at first, I didn't quite get the hype. By the end, though, I was obsessed. It's like John Green famously said: I fell in love the way you fall asleep: slowly, and then all at once. Except I wasn't sleeping, because I was watching every episode of The O.C. But you get the point.

And as my friends had predicted, the series quickly became my new favorite. The dialogue ("You know what I like about rich kids? Nothing!"), the drama, the dream of a human being that is Seth Cohen — I loved everything about The O.C. Everything, that is, but Marissa Cooper. And now I know it all could've been avoided, if Barton had only had the good sense to back out at the beginning. Oh, well; having a character as awful as Marissa did give the show some of its most memorable moments. Such as:

Her Refusal to Eat Anything

This is a typical diner scene in The O.C.: Ryan and Seth eating away at their sandwiches. Summer taking occasional bites of her meal. Marissa waving a french fry around as if it's an extension of her hand and walking away saying, "I'm stuffed!" Look, I know the girl used to have an eating disorder, but either make her unhealthy diet a plot point in the show (since an eating disorder is serious subject worth dissecting, on TV and elsewhere), or show her as a recovered teen. Why, instead, eat into our subconscious, forcing us to watch the pretty, popular girl eat nothing?

Almost dying in Tijuana. Almost dying with Oliver. Almost dying with Trey (all right, that one wasn't her fault). Actually dying in a car accident. Marissa couldn't go a couple of months without nearly getting killed, and every time she came close to biting it, her friends had to be the ones who saved her life. And when she actually died, in the third season finale, it was because Volchok, the creepy guy she'd been hanging out with, rammed into Ryan's car and ruined his life, too. Even in death, Marissa couldn't help but makes things difficult for everyone around her.

Wanna know how to be a good friend? Try not crashing at their house for a year, barely getting to know their boyfriend (I mean, did she ever ask about Seth?), and taking advantage of every opportunity to complain about your life, whether or not they want to listen. Marissa and Summer were supposedly best friends, but one girl clearly gave a lot more effort than the other.

And Her Awful Relationship With Kaitlin

In the world of The O.C., going to boarding school apparently means dropping off the face of the planet, because Marissa and Kaitlin never talked while the younger girl was away. In fact, they communicated so little that when Kaitlin returns home in season three, they act as if they haven't been in the same room together in years. Which is probably true. Because Marissa is a terrible sister. And speaking of Kaitlin ...

She Doesn't Care About the Alopecia-Stricken Horse

Even Julie mustered some sympathy for Kaitlin's sick horse. And if Julie Cooper is feeling bad, there's no excuse for anyone else not to, too.

To be fair, a person's alcoholism can't be caused by someone else. But she did encourage it. Though he can't blame his alcoholism on the fact that Marissa didn't want to be with an obsessive, immature surfer, she did completely lead him on, handed him off to Kaitlin, and disregarded all the warning signs that he was about to destroy his life. And that sort of behavior kind of makes Marissa a terrible person.

Julie is an awful human being. She's incredibly selfish, hugely narcissistic, and completely out of touch with reality. In four seasons of the show, she does everything from ruin Kirsten's company to sleep with Marissa's boyfriend. But everyone still loved her, because Julie Cooper is, hands down, the best character on The O.C. Marissa, however, did not, because Marissa is the worst.

She Made Ryan's Life Terrible

After moving to Newport, the only thing Ryan needed in his life was stability. And what did he get instead? Marissa Cooper, the crazy, unlikable, and totally unappreciative "girl next door." Over the course of their on-again, off-again relationship, Marissa did everything in her power to make Ryan's life miserable. She destroyed his family life, ruined his chances of getting into good schools, and when she died, she sent him on a downward spiral that ended with cage fighting and Taylor Townsend. Dear Ryan of the O.C. pilot: See that girl standing there, weirdly staring at you? Don't talk to her. In fact, get as far away from her as you can. Trust me, it's for your own good.

More like this
Shaq Might've Spoiled His Relationship Status With Kirsten After 'MAFS'
By Brad Witter
Airris From 'MAFS' Says He Doesn’t Regret Going To Decision Day With Jasmine
By Brad Witter
The Banned 'Friends' Ad Shows Monica As You’ve Never Seen Her Before
By Sam Ramsden
Ashton Kutcher Wants Danny Masterson “To Be Found Innocent” In Rape Retrial
By Jake Viswanath
Get Even More From Bustle — Sign Up For The Newsletter
From hair trends to relationship advice, our daily newsletter has everything you need to sound like a person who’s on TikTok, even if you aren’t.