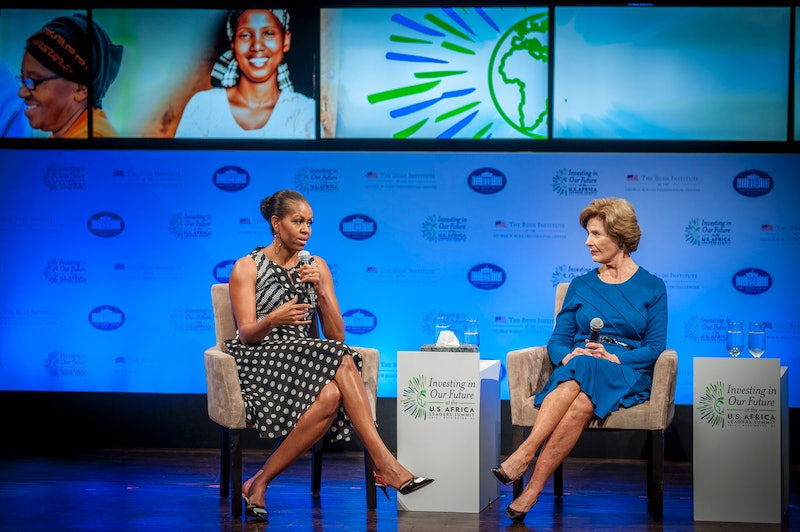 One is a Republican Southern gal, born and raised in Texas, and the other is a Democratic city girl, raised in Chicago and educated in Boston. But the two ladies have plenty in common, including the title of first lady and the causes they hold dear: Michelle Obama and Laura Bush spoke about women's education at President Obama's U.S.-Africa Leaders Summit in Washington, D.C. on Wednesday. In between commenting on matters of international importance, they also took the opportunity to display their adorable mutual girl crush.

The U.S.-Africa Leaders Summit brought together African presidents, prime ministers, foreign affairs ministers, and even OITNB actress Uzo Aduba (e.g. Crazy Eyes) for a three-day summit on the economic and political security of the continent. The theme of the inaugural summit was "Investing in the Next Generation." According to the White House page for the event:

This Summit is an opportunity to discuss ways of stimulating growth, unlocking opportunities, and creating an enabling environment for the next generation.

Naturally, education plays an integral role in creating such an environment for future generations — in particular, education for girls and women. Former first lady Laura Bush joined first lady Michelle Obama for the "Investing in Our Future" panel to shed light on the topic.

Obama commented that roughly 30 million girls are not enrolled in school in sub-Saharan Africa, which, according to UNICEF, has the lowest proportion of countries with gender parity. But as UNICEF and both women point out, educating girls in Africa will help break the poverty cycle and pave the way for a healthier, more prosperous future generation.

"You have to change attitudes before you can change behaviors," Michelle told the crowd. She added that the former first lady "set a high bar for me during her time in the White House."

Obama also praised the Bush daughters for setting positive examples for young people in America. "We have had some terrific role models — Jenna and Barbara are just amazing young women who are doing extraordinary things, not just in this country, but around the globe," Michelle told moderator Cokie Roberts. "They're setting a high bar."

The two have been close for a while. In 2008, long before the two joined forces to help promote U.S.-African relations, Laura came to Michelle's defense after the latter made a controversial comment. When asked about Michelle's remark that she was proud of the United States "for the first time in my adult life," Laura told ABC News, "I think she probably meant 'I'm more proud.' That's what she really meant." Clearly, she empathized, adding, "You have to be really careful in what you say because everything you say is looked at and in many cases misconstrued."

During the summit, Michelle said of Laura: "I consider her not just a role model, but also a friend."

D'aw. And what's better than two amazing women coming together for an incredibly important cause?

More like this
Here’s How Lizzo Is Supporting Abortion Rights After The Roe v. Wade Reversal
By Brad Witter
Police Shove 'Full House' Star Jodie Sweetin At An Abortion Rights Protest
By Radhika Menon
How Getting An Abortion Has Changed From The ’60s Through Today
By Amanda Chatel
34 Quotes That'll Inspire You On Juneteenth & Beyond
By Syeda Khaula Saad and Siena Gagliano
Get Even More From Bustle — Sign Up For The Newsletter