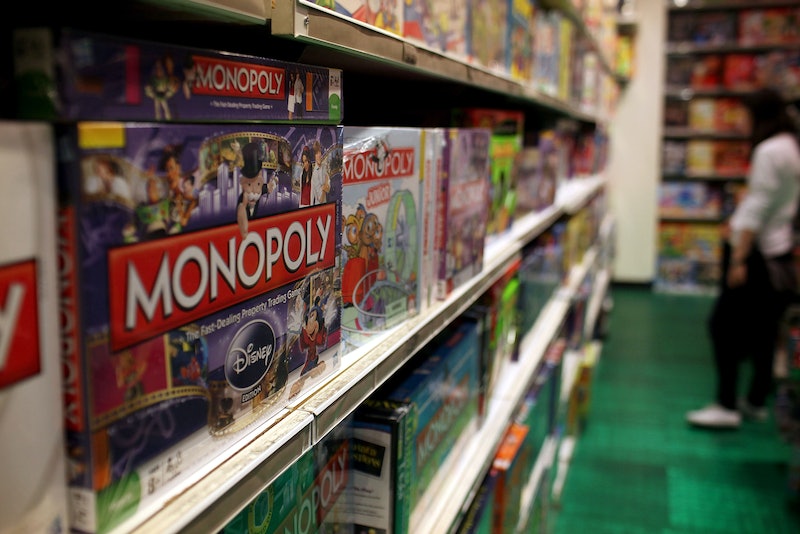 Is it just me, or has it been a little… well, damp this summer? When it hasn’t been blazingly, unbearably hot, that is. Then again, given how snowy the winter was, we probably shouldn’t be that surprised (although I didn’t anticipate needing to hide from a tornado last week during a trip to Boston. Gee, that was fun). In any event, it seems like I need to come up with new activities to keep myself occupied every other day because of the substantial amounts of water that are constantly pouring from the sky.

Clearly what I should be doing is raiding my old stash of board games. Sure, it sucked being stuck inside during the summer because of shitty weather when we were kids; but with a couple of friends (and/or a willing parent or two), a bunch of snacks, and a stack of games like Guess Who?, Clue, Sorry!, and more at our fingertips, it didn’t seem quite so awful. We’d lose whole afternoons connecting four, building plastic mouse traps, and becoming real estate moguls — and we had a blast while doing it.

This Throwback Thursday, let’s all go dig around in our toy chests and see what we can unearth (complete with vintage commercials, of course), shall we?

Secret passages, tiny little weapons, a sprawling mansion, a murder mystery… Clue (or Cluedo, depending on where you grew up) was definitely my favorite board game growing up. First created in 1944 by British musician Anthony E. Pratt as a way to pass the time in air raid shelters during WWII, it officially launched courtesy of Parker Bros. in 1949. It only got better when I discovered there was an amazing movie based off of it — and did anyone else read the tie-in armchair detective book series inspired by it, too? Clue was the best. Hands down.

The version of Hungry Hungry Hippos I played when I was a kid had hippos of orange, green, yellow, and pink, but apparently the pink one — Happy — was originally a purple one named Lizzie. Who knew?

Guess Who? may have suffered from a lack of diversity, with the 1987 version featuring only five women to 19 men; even so, though, it was still a blast to play. I think we mostly liked flipping the characters we eliminated down, although it also gets points for having one of the most memorable ads of the ‘90s.

Confession: I never actually played Mall Madness. Then again, maybe that’s a good thing; you can argue that it teaches valuable math skills or whatever, but let’s face it: It’s all about rampant consumerism. But hey, at least the electronic version talked to you, right?

Did anyone actually play Mouse Trap? I mostly remember setting it up so I could watch the Rube Goldberg contraption that factored so prominently on the game board in action. Maybe that’s just me, though.

HeroQuest: Functioning as a gateway obsession for Dungeons and Dragons since 1990. My dad used to play this one with my brother and I — he was always the Dungeon Master, my brother usually played the barbarian and the wizard, and I was usually the dwarf and the elf. Why, yes, we were a nerdy family; why do you ask?

It may have been a supremely terrible movie, but Battleship was one heck of a game. And it’s old, too — the Milton Bradley version with the pegs and plastic boats first hit shelves in 1967, but it was played as a pencil-and-paper game for decades prior. This newspaper article from 1931 describes Salvo, the game on which Battleship is believed to have been based. TIL, right?

Like Clue, Candy Land has been around since the ‘40s. Unlike Clue, though, Candy Land was (somewhat hilariously) once involved in a dispute over an Internet domain name. Hasbro took an “adult content provider” to task for registering the domain name www.candyland.com; Hasbro, owning the trademark to the phrase “Candy Land,” won. Typing candyland.com into your browser now redirects you to Hasbro’s website. Fun fact!

The stakes were always high for this sucker — you didn’t sit down to play it unless you had a lot of time on your hands — so it is perhaps unsurprising that Monopoly was responsible for ending more friendships than any other board game during our childhood years. The Westwood Studios CD-ROM version, with all its fancy animations, was pretty bitchin’, though. I also got a kick out of the fact that the AI players the game included were named things like Fox, Dana ( X-Files for the win!), and Guybrush (any other Monkey Island fans out there?).

If you always thought Connect Four felt a little unfair, you’re right — the first player pretty much always has the advantage. Contrary to popular belief, however, this game was not invented by David Bowie. Just, y’know… FYI.

11. Snakes (or Chutes) and Ladders

You know, one of the coolest parts about my job is the fact that I get to keep learning neat stuff every day. Case in point: I just got totally lost in the rich history of Snakes and Ladders for about half an hour, and I could have kept going if I hadn’t pulled myself away. It originated in India, along with the games that would eventually be marketed in the U.S. and Europe as Ludo and Parcheesi; its first commercial release stateside, Chutes and Ladders, came in 1943 courtesy of Milton Bradley. The more you know!

Either the rules for Sorry! have gotten considerably more complicated over the years or I never played it right as a kid. When I attempted to play it recently, I glanced at the rules and realized I had no idea what any of them meant. Anyone else? Just me? OK then. Moving on. I will say, though, that Sorry! might be responsible for generations of #sorrynotsorry hashtaggers.

Like Monopoly, the Game of Life was not to be undertaken unless you had an appropriate (read: ridiculous) amount of time to devote to it. The video here, by the way, contrasts the commercials for the games from the ‘60s, ‘80s, and ‘90s. My, how the times do change!

I’ll be honest: The only reason I played this game was because I loved the noise the Pop-O-Matic dice roller thing made.

More things I learned today include the fact that “Mancala” is actually a whole genre of related games. The version that kept popping up in classrooms and at friend’s houses when we were kids has a less impressive history than most of the other, more complicated versions; called simply Kalah, it was invented by William Julius Champion Jr in 1940. Like Connect Four, it heavily favors the player who goes first; if you choose the right moves, you can win without ever giving up your turn.

As was the case with Mall Madness, I don’t think I ever played Girl Talk; I did, however, play plenty of Truth or Dare, although thankfully Truth or Dare didn’t involve any “zit stickers” (way to body shame us from an early age, toy companies). Eagle-eyed viewers might recognize a young Jewel Staite in the ad shown here.

A traumatic experience with Operation as a very young child left me terrified of the game for years to come. I’m not kidding — I had recurring nightmares about it and everything. I actually had a visceral reaction the moment I loaded the commercial on YouTube. Needless to say, my rainy days as a youngster were not full of this particular game; maybe yours were, though. I’d rather play Alien Autopsy.

No, not the CNN series Jon Stewart single handedly brought down in 2005 after a scathingly memorable appearance. Was the post-apocalyptic ‘90s commercial for this one awesome or what? I’m pretty sure that’s the only reason my brother and I ended up with this one in our toy chest. It was like Road Warrior, only with ball bearings.

Playing too much KerPlunk as a kid is probably the reason I grew into an adult with a bizarre obsession with onomatopoetic words.

OK, so technically Uno isn’t a board game — but go ahead and tell me that you didn’t while away at least a few rainy days with these brightly colored cards. Nothing was better than the feeling of knowing you had a Wild Card in your hand.

More like this
The Office Lego Set Includes All Your Favourite Dunder Mifflin Characters
By Sam Ramsden
The “Teenage Dirtbag” Trend Is TikTok's Latest Nostalgic Obsession
By Meguire Hennes
Everything To Know About 'And Just Like That...' Season 2
By Jack Irvin
Jennifer Coolidge Just Said The Most Controversial Thing About Legally Blonde’s “Bend & Snap”
By Maxine Harrison
Get Even More From Bustle — Sign Up For The Newsletter