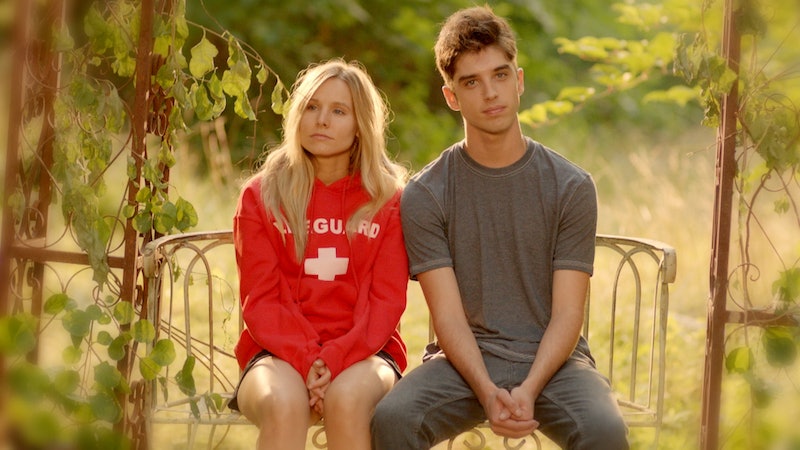 There are two types of people in the film world — those who hated Jason Reitman's main character in 2011's Young Adult because she's a deluded narcissist who says and does atrocious things but never redeems herself, and those who loved it, for the exact same reason. Liz Garcia, the writer/director of The Lifeguard, who's best known for her work on TV shows like Dawson's Creek and Memphis Beat, falls squarely into the second category.

"She didn't actually change," she says of Charlize Theron's character, Mavis, in a phone interview with Bustle last week. "It wasn’t some bullshit journey."

Garcia knows something about controversial characters. The Lifeguard, her debut film, will be released on August 30 (it's already available on iTunes) and features a protagonist just as flawed and unforgivable as writer/producer Reitman's in Young Adult. Leigh (Kristen Bell), a miserable 29-year-old, returns home and begins a relationship with a 16-year-old. She's sad and vulnerable, yes, but a sympathetic character? Not quite.

"It bothers me to no end when I see the same stock female character over and over again in movies — women who are clumsy, or have some complete bullshit flaw that’s been assigned because the writers don’t want to give her some real characteristic, some real problem, some habitual flaw, for fear that she’ll be unlikeable," Garcia says. "That’s such a condescending approach to female characters."

She continues, "A lot of the people making the decisions about what movies and television are made don’t really know women. They don’t know how to write them, and then they’re just afraid that they’ll turn off other people like themselves, people who don’t understand women. So they’re like, 'oh, we’ll just make her an object,' but that doesn’t work."

The women in The Lifeguard are complex and flawed enough to scare off any producer, but Garcia's not worried.

"I just come from the place of wanting to write about people who are interesting to me, and feel real to me," she says. "And actors want to be challenged. I want to write roles that are compelling for them."

And clearly, that attitude is working. For The Lifeguard, Garcia recruited the impressive roster of Kristen Bell, Mamie Gummer, Martin Starr, Amy Madigan and Joshua Harto (her real-life husband and writing partner) to fill out the cast.

"When Kristen read the script, she saw what I already knew, which is that she was just right for it," Garcia says. "She made the movie possible."

As depressed, self-centered Leigh, Bell proves that she can handle leading a movie without Veronica Mars in the title. The Lifeguard showcases her range as an actress, and is a far cry from the perpetually happy cool-girl persona fans know and love.

"This is a role only a few actresses would be right for," Garcia says. "The dialogue just made sense coming out of Kristen's mouth."

Yet the movie's real revelation is relative newcomer David Lambert (now of The Fosters), who plays Jason, the precocious but troubled teenager who begins a relationship with Leigh. It's a difficult role, as Jason's character is naive but intelligent, vulnerable but defensive, angsty but calm; in other words, he's a realistically complex 16-year-old.

"David is magnetic," Garcia says. "He's this combination of boy and man and vulnerable and open ... when he auditioned, we were just frozen."

Lambert's unique ability to straddle the line between adolescence and adulthood is evident in his character's relationship with Leigh. He's attracted to her, and as excited as any teenage boy would be about having sex with an older woman, but there's a unexpectedly emotional element to their dalliance. Leigh's naivety — she expects to come home after all these years and be welcomed by her family and friends with open arms — is balanced by Jason's quiet maturity. Their May-December relationship is sexual, and thus dangerous, but thanks to Bell and Lambert's performances, as well as Garcia's strong direction, it's affecting, almost sweet.

"I wasn't trying to make a Lifetime movie. It's not an 'issue' movie,'" Garcia says. "You can walk away from the movie judging their relationship, and that's fine, but I want people to go on an emotional journey with the characters."

Leigh's "emotional journey" is particularly relatable; approaching her 30th birthday, she's nowhere near as happy as she expected she'd be, and reverts to the familiar — her parents' home, her hometown, her high school lifeguarding job — as a understandable, albeit unwise, method of escape.

"It’s expected by the time we’re 30 that we’ll feel like adults, and that we’ll feel good about being adults, but often, we don't," Garcia says. "Men are allowed to be wild children a little longer, but women are supposed to be civilized and domesticated and not be put off by that. But for Leigh, and also for a lot of people, 30 is the jail cell closing."

Leigh's far from the only character in The Lifeguard to approach impending adulthood in a less than conventional way. Both Gummer's Mel, who's contemplating motherhood along with her husband (Harto), and Madigan's Justine, Leigh's mother, who finds her mid-life reinvention interrupted by her daughter's sudden return, are unsure of how to deal with major life changes. For Garcia, Justine's character holds a particular significance.

"Stories about women in their 50s and 60s are never told," she says. "I have a wonderful mother who’s dynamic and an artist and has never stopped changing or pushing herself in her life. Often, women become these accessories to the story, but I wanted to give them more dimension than you'd typically see."

In January, Garcia premiered The Lifeguard at the Sundance Film Festival, where it was nominated the Grand Jury Prize. It lost to Fruitvale Station, but Garcia has no regrets.

"Getting into Sundance was one of the best things that’s ever happened to me," she says.

For the first year in the festival's history, an equal number of male and female directors competed for the dramatic competition, a feat not lost on Garcia.

"It shows that women are ready to make movies and tell their stories," she says. "If it’s not happening through the studio system, then they’ll just go to the indie world and make these great movies there."